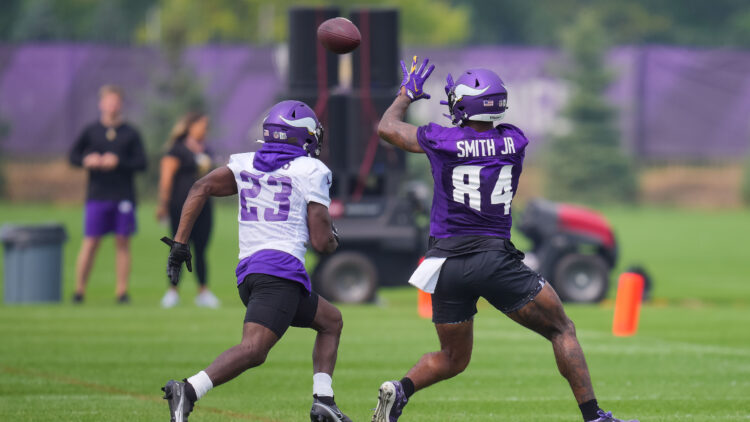 The hope is for Irv Smith Jr. to not only be fully healthy in 2022, but also to live up to his potential. If those things occur, Minnesota could reasonably have one of the league’s top 10 tight ends. Unfortunately, this scenario is far from a guarantee. The talented TE missed all of last season due to injury. If he can’t play all 17 games in 2022, what will the Vikings do at tight end? Is there enough depth?

The tight end situation for the Vikings is far from inspiring. Most people who follow this team do have high hopes for Smith Jr., but the aforementioned uncertainty does create some reason for doubt.

The players who find themselves on the depth chart are Zach Davidson, Nick Muse, Johnny Mundt, and Ben Ellefson. Of the four, Mundt offers the most NFL experience. He has been in the league since 2017, though he only has 10 catches and 93 yards. Obviously, the team will be looking to their talented wide receivers and deep running back group to be primarily responsible for shouldering the load in the passing game. Even still, having so little proven talent beyond the TE1 is concerning.

Free agency remains an option. Spotrac lists a number of players who are available, most of whom are veterans who’d need a sheltered role. Kyle Rudolph is out there and there are some rumblings he’d like to return. Eric Ebron, Blake Jarwin, and Jared Cook are all notable names.

The hope, quite evidently, is for Smith to be available to the Vikings. If he isn’t, then this is a team that will need to shift away from their tight ends. In that scenario, the team would need to lean on the abundance of talent at RB and WR. We might even see them add a second FB to the roster to have another player who could contribute as both a blocker and pass catcher.