Improvement to Vikings Defense Must Stem from Veteran Leaders

So far into the 2022 NFL season, Ed Donatell’s defensive scheme has not brought about lucrative results for the Minnesota Vikings. Through four games, Minnesota has allowed the sixth most yards in the NFL with opponents averaging 394.5 yards per game. Of course, for now, they’ve stood strong when it matters. The Vikings defense is giving up the 12th-fewest points in the league and are yet to allow a team to break 25 points in a game.

Even still, in order for the Vikings to be considered serious contenders in the NFC, they’ll have to find a way to improve on the defensive side of the ball. The improvements to the Vikings defense must stem from their veteran talent.

The biggest key to the Vikings defense being unlocked comes from their pass rush. Minnesota spent much of their attention this offseason towards improving the personnel here in order to take pressure off the secondary. One of those moves included signing Za’Darius Smith, stealing him away from the Packers.

The first four games of 2022 have seen decent production from Smith as the veteran has put up sacks in all but one game. However, Danielle Hunter has failed to match Smith. Hunter has just eight pressures to this point in the season, and he recorded his only sack in Week 1.

Moving forward, Hunter and Smith need to be a consistent threat off the edge against opposing QBs. A positive in this area has been the fact that Dalvin Tomlinson has emerged as a strong presence in the pass rush. He’s recorded 1.5 sacks through four games and is on pace to demolish his career high of 3.5. If this trio can play well moving forward, that will make Minnesota’s defense a dangerous group.

Both Eric Kendricks and Jordan Hicks have had strong moments early in the season, but neither of them consistently played outstanding football through the first month of the season. In particular, Kendricks is essentially replicating his 2021 season where his PFF grade ended up being 59.2. So far in 2022, his grade is 63.0.

As for Hicks, he’s never been overly effective in pass coverage, but this year it has been particularly noticeable. His PFF grade of 53.7 is the lowest of his career. Minnesota needs their linebacker duo to come together and lock down the middle of the field to make things tougher on opposing QBs. We saw Hicks do it very well down the stretch of the game against the Detroit Lions, but moving forward, it must consistently happen.

In Weeks 3 and 4, Patrick Peterson actually played the best he ever has in a Vikings uniform. He recorded multiple pass defenses in back-to-back games for the first time since 2012, and without these strong performances, the Vikings likely wouldn’t have won against both the Lions and Saints.

That said, according to PFF Harrison Smith has been targeted 11 times and allowed 10 receptions in the three games he’s played. The Vikings have been burned over the top a couple times in the first four weeks of the season, and that needs to change moving forward. Part of that falls on their veteran safety improving his play.

Overall, the yard totals that the Vikings have allowed is a bit shocking upon first glance. However, it should provide a glimmer of hope that this team continues to hold teams to reasonable point totals. Opponents are averaging just 20 points per game this year, and if that continues, the Vikings offense should be able to score enough to win most games.

That said, as stated at the beginning of this article, the Vikings defense must find ways to get off the field early in drives for Minnesota to be true contenders in the NFC come playoff time. There’s a road to Minnesota improving this side of the field, and they get what should be an easy matchup this week against the Chicago Bears to kick things off. 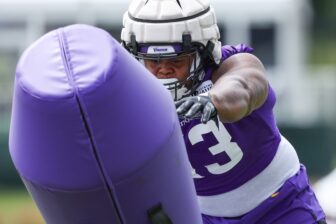