Four weeks into the season, it’s hard to imagine things being much better than they currently are for the Minnesota Vikings. The Purple and Gold are 3-1 through their first four games, including divisional wins over the Green Bay Packers and Detroit Lions, and their only loss occurred against the NFL’s final remaining undefeated squad, the Philadelphia Eagles.

Minnesota leads the NFC North via tiebreaker, and they are the No. 2 seed in the current NFC playoff picture. There are many reasons for this outstanding start to the season, but here are four of the biggest purple postives through Week 4 of the 2022 NFL season.

Obviously, Kirk Cousins faced boatloads of pressure against the New Orleans Saints defensive front on Sunday. The Vikings o-line, specifically Brian O’Neill on the righthand side, let Cam Jordan get pretty much whatever he wanted in the pass rush, and Cousins was sacked three times.

That said, you may be surprised to learn that PFF gave two offensive linemen the top grades for the Vikings offense. Christian Darrisaw graded out at 75.3, and Ed Ingram scored a 70.2 in their metrics.

As a whole, the Vikings offensive line has been far better than previous years, and a large reason for that are the two youngest members that were mentioned above. Many predicted that Darrisaw was in store for a breakout campaign in 2022, and so far, that has come to fruition. Additionally, Ingram may have some struggles here and there in pass protection, but his play at right guard is much better than anything the Vikings have had over the past two years.

Adam Thielen and Dalvin Cook got off to concerningly slower starts this season, but over the past two weeks, they’ve truly come back to life. In fact, as a whole, it’s hard to argue that any of the veteran Vikings have really slowed down.

On Sunday, Patrick Peterson arguably played his best game as a Viking. He’s had a pair of pass defenses in back-to-back weeks for the first time since 2012.

If you’re going to argue for a veteran Viking that has played worse than his career average, it’s likely Kirk Cousins, and yet, the Vikings still stand at 3-1. If Cousins gets back to his usual accurate form as Kirk-tober progresses, and the rest of the veterans play well, the Vikings could be a very scary team for the rest of the league.

In 2020, the Vikings special teams unit was an absolute disaster for many reasons, and while 2021 got better, they still had their struggles. However, 2022 has been completely different four weeks into the season.

This unit has made game-changing plays throughout the season. Greg Joseph missed an extra point on Sunday, but he hit five field goals that carried the Vikings to a win over the Saints. Patrick Peterson’s blocked field goal in Week 2 ultimately didn’t change the outcome of the Monday night game in Philly, but it gave Minnesota one last gasp of life. Ryan Wright has not only been a great punter, but he completed a 13-yard pass on a fake punt in London.

Matt Daniels truly has changed the culture for the Vikings special teams unit from being “just good enough” to being one of the most consistently awesome groups in the NFL. Enjoy this while you can, Vikings fans, because Daniels is going to get an offer as a head coach soon.

Defense Gives up Yards, but not Points

One of the main concerns for the Vikings has been their defense under Ed Donatell. They’ve given up the sixth-most yards in the NFL, and they’re one of eight teams allowing 6+ yards per play. They’re bottom-10 against both the pass and the run.

All that said, the Vikings “bend-don’t break” strategy seems to be working. They’ve allowed just 20 points per game so far this season, and they are yet to allow more than 25 points to any team.

Obviously, it would be nice for the defense to completely shut down opposing offenses, but this is still a learning process as players adjust to Donatell’s 3-4 scheme. Eventually, the plan should be that the Vikings defense turns into a shutdown unit, but we have to patient. For now, keep this in mind: if the Vikings score more than 25 points, they’re in a good spot to win. That should be doable for this star-studded offense on a weekly basis. 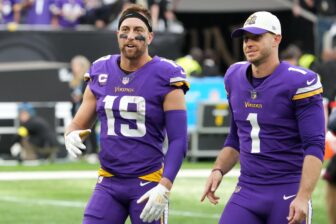