In the aftermath of the Minnesota Vikings’ thrilling comeback upset of the Buffalo Bills on Sunday, many of us in Purple Nation may be scratching our heads in wonderment. Looking as though we’re recovering from a week-long bender, our exhilaration from Sunday’s revelry most certainly is mixed with some perplexing bemusement on Monday morning.

How did that happen?

From Justin Jefferson’s game-extending catch to the very improbable Eric Kendricks fumble recovery for a touchdown, how in the wide, crazy world of Vikings football did they take their last-second, one-score winning of 2022 to yet another improbable and fantastic level?

Joy gives way to bewilderment. And then as we look back over this incredible game, we must certainly make our way back to joy and an all-knowing nod of agreement. This is who the Vikings are in 2022. Warts and all, they are ultimately a team that believes and never gives up and when, in the past, we know many of these last-second games would have been lost in past Purple seasons, this year they are victories. Get used to it—this is who they are and will continue to be.

This game was supposed to be different. This one came on the road against the consensus pre-season Super Bowl favorite with the best defense in the league. Their quarterback, though dinged up, is every bit the biggest and best offensive weapon in the league. This is the one in which if the Vikings merely competed it would have validated all that had come before it the previous six weeks when they won six consecutive one-score games (many we figured they should have won more easily). But if they, instead, played as they did against the other best team in the league – the Philadelphia Eagles in Week 2 – then we would know they are indeed the worst 7-2 team in the league.

Using a familiar script, they started strong with an opening-drive touchdown, crawled into hibernation for the middle of the game, and then awoke in time to scramble back for a chance at victory. They took that chance down to the one-inch line and were finally turned back with a fourth-down goal-line stand by the vaunted Bills defense. They were done; they were beaten. And somehow they still won. Why? Because that’s what they do. That’s who they are.

While I won’t discount a bit of luck thanks to four Buffalo turnovers, the Vikings made the necessary plays that turned it into an eventual victory. But not without some more improbable plays and self-destruction of their own along the way.

In overtime, which should not have happened (either due to their lack of defense or the review officials’ lack of execution), the Vikings put together another impressive drive down to first and goal—and had to settle for a field goal. They ran three bad plays and couldn’t put the game away. The self-inflicted errors put them back behind the eight-ball and gave the Bills another legitimate chance to steal the game back. Of course, this team, this year, made the big play to preserve the win.

That’s how the Vikings roll. This is who they are:

Everyone in the country saw that game in Buffalo (or at least the highlights) and now know more about the Vikings than simply a bedazzled Kirko Chainz. They are 8-1, the second-best record in the league, and knocked off a big-time foe for a significant and signature win. “Game of the Year” was a common refrain. Therefore, expectations for this team are about to change. So, the point is, how will they handle that?

It is easy to throw caution to the wind, or throw a Hail Mary pass into tight coverage when no one expects it to work. It’s what you have to do, and you won’t be faulted if it fails. Previously, the Vikings played desperate, catch-up football, padding their late-game stats while the record fell below the Mendoza Line. This year, that desperation has succeeded and somehow each week turns into more wins. And those victories change everything.

If you subscribe to the saying that you are what your record is, the Vikings are the second-best team in the league. And now folks are going to have to start thinking that way—even though Vegas has the Cowboys opening as a 2-point favorite this coming Sunday. And my concern is how the team will react.

If you aren’t expected to win and yet still win, it’s a bonus; if you don’t win, no biggie. But if you are expected to win and do, no biggie; if you don’t, that loss weighs heavier. So, does Nervous Kirk appear under loftier expectations? Do those second-quarter swoons become tsunamis with the weight of failed expectations added to the final result? Do the cracks in the secondary rupture when a team with no expectations (like the lowly Lions or the resurgent Packers) throws caution to the wind and Hail to the Mary?

The Vikings were in a competitive rebuild and could play loose because they were all learning a new system in the first half of the season. Now it’s November, the playoffs are looming, and the pressure gets real, so the wins will be greater and the losses can stagger you. How are they going to respond?

Know this, the Vikings are a very good team looking to be great. They aren’t going to blow anyone out and they aren’t ever going to give up—they proved that after the failed QB sneak on Sunday. This is who they are—a team that is a hell of a lot of fun to watch. Get used to it. And for the Vikings themselves: if you beat the Cowboys on Sunday as a home underdog, which I fully expect you to do, enjoy the last time you will be overlooked again this season. Get used to it. 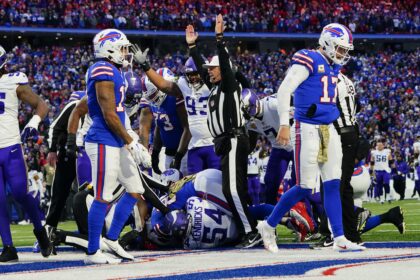