A Defining Feature of Kwesi Adofo-Mensah’s Time as GM? Trades. 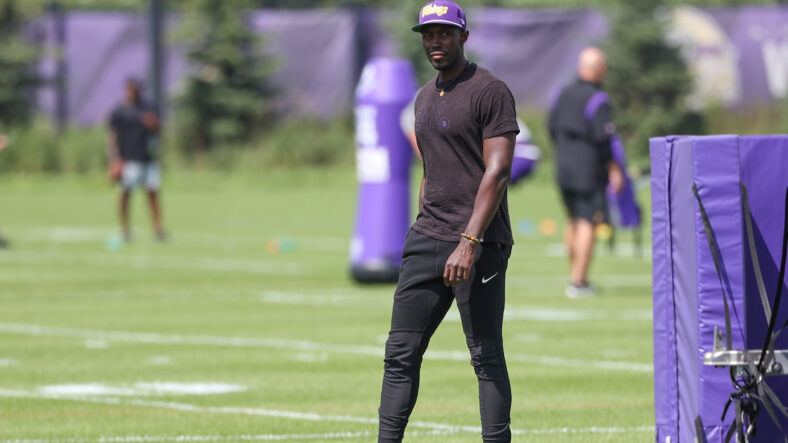 Kwesi Adofo-Mensah hasn’t been a GM for very long, but we’re already getting a good sense for how he’s approaching the job.

It began during the draft.

Rather than stay at #12, Adofo-Mensah opted for a surprising move with a division rival. He sent Detroit the 12th and 46th picks in exchange for the 32nd, 34th, and 66th picks. The decision came with both applause and criticism, but mostly criticism. The Lions drafted Jameson Williams, a player who has the potential to be a WR1 in the NFL. Frankly, I still don’t love the deal.

For an encore, there was another trade to begin the second round. This time, it was with another division team: the Green Bay Packers. The team’s Wisconsin rivals got Christian Watson, who is also an upside receiver. GB received the 34th pick in exchange for the 53rd and 59th.

Of course, the Vikings GM wasn’t done; nay, Kwesi Adofo-Mensah pulled off a grand total of six trades. The end of the draft wasn’t the end of the trading, though.

Nick Mullens is Minnesota’s backup QB. From what I can gather, most Vikings fans are enthusiastic about this deal. Dustin Baker wrote about the trade, concluding that “Vikings fans universally embraced the addition of Mullens in the immediate aftermath of the deal.” It’s hard to disagree with that assessment.

More recently, the team brought in Ross Blacklock. Taken in isolation, the decision to add Blacklock seems like a fine decision. However, the Blacklock add happens to coincide with the Armon Watts cut, a move that surprised many (myself included).

Yesterday, we learned that the Vikings traded for Jalen Reagor. As we’ve previously noted, a position that the Vikings might target is punt returner. A fourth and a seventh was enough for Minnesota to bring Reagor over to Minnesota. The Week 2 game against the Eagles now has a little more drama.

Some of the trades have garnered praise; others have brought forth concern. Regardless, Kwesi Adodo-Mensah hasn’t shown too many signs of adjusting his approach as a GM. Nay, he has been consistent. He wants to gather evidence to make informed decisions. He wants these decisions to be collaborative. He’s also more than willing pull off trades.

In the end, some of his deals won’t work out. That’s going to be true for any executive in any sport. The hope, though, is that the moves collectively lead to a stronger Vikings team. Perhaps we’ll even see another trade or two before the Packers arrive in Week 1.