The Tiers of Fantasy Football QBs

If you’re like me, you’ve been thinking about who you want on your fantasy football teams throughout the majority of the summer. For the next couple weeks here on Purple PTSD, we’ll be examining each position group for the upcoming season. In the process of doing this, we’ll put each group into tiers to determine where you should select them in your drafts.

This is the group that I would leave off the draft boards. There are simply better players to select, and if you get to the point where you have to take one of these guys to be your regular starting QB, well, you’re in trouble.

That said, keep an eye on these guys on the waiver wire throughout the season. For example, if you’ve got Matthew Stafford or Lamar Jackson as your weekly starter, they are both on bye for Week 8. The Carolina Panthers play the Atlanta Falcons that week; a defense that likely ranks among the bottom of the league. It may be worth picking up Baker Mayfield for that week, assuming he wins the starting job in Carolina.

When my fantasy draft comes around, I try to pick out at least one of the younger QBs with high upside and store them on my bench to see how the season plays out. In recent years, I’ve benefited from the final weeks of rookie Lamar Jackson in 2018 and the year three breakout of Josh Allen in 2020.

This season, I’ve got my eye on Trevor Lawrence out of Jacksonville. The Jaguars have a stable system in place under Doug Pederson, they’ve spent money on the offensive line, and they’ve given him an intriguing group of pass catchers.

If Lawrence goes off the board too early, then keep an eye on Desmond Ridder out of Atlanta, too. Marcus Mariota looks like the Week 1 starter right now, but the Falcons could want to get a look at Ridder sometime this year. He and Kyle Pitts could form a dynamic duo, and there should be plenty of throws if Atlanta plays from behind a lot.

There’s no way of telling what you’re going to get out of this group on a week-to-week basis. You might get 30 points one week, and you might get five the next. Additionally, guys like Jameis Winston and Daniel Jones have injury histories to take into account.

Keep an eye on both Matt Ryan and Tua Tagovailoa out of this grouping. Ryan joins a run-heavy offense with Jonathan Taylor in the backfield, but talented receivers like Michael Pittman should offer opportunities to throw the ball. Tagovailoa has one of the fastest receiving duos we’ve ever seen in Tyreek Hill and Jaylen Waddle, and he gets the benefit of an offensive-minded head coach in Mike McDaniel. If there was ever a year for him to boom, it’s 2022.

These guys might be the more boring choices for starters in fantasy football, but you know what you’re going to get out of them when they’re on the field. Very rarely are they going to put up 30+ point performances, but just as rarely are they going to score in the single digits. Unless you feel very strongly about someone mentioned in tier 3, or you really value having a QB that could potentially get you 30-35 in a given week rather than multiple stars at skill positions, this is the group to shoot for. Start ’em and forget about ’em.

If I were to make a choice to draft from this group, it has to be Joe Burrow. Injury concerns are there, especially after re-injuring his knee in the playoffs, but his offensive line should be better in 2022. The receiver group is one of the best in the league as well, and Joe Mixon should continue to be a receiving threat out of the backfield. Keep an eye on Captain Kirk Cousins as well. Kevin O’Connell could very well open up a new level of play from the veteran that we haven’t seen in his Vikings tenure.

These players are the gold-standard of the QB position, especially in fantasy football. Russell Wilson had some struggles during his final season with the Seattle Seahawks, but he now joins a Broncos team that immediately looks like a Super Bowl contender.

The other six players on this list combined for a total of six single-digit fantasy outputs in 2021. They also had 32 performances of 25-plus points throughout the year. You can’t go wrong with taking any of these seven players, and especially in two-QB leagues, you should have a goal of getting at least one of them for your fantasy football roster. 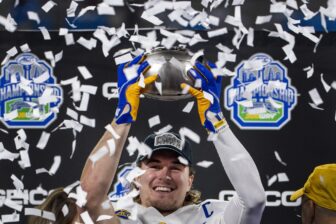