If there is one thing that is synonymous with the NFL Draft, it’s that QBs always go high. Even when they probably shouldn’t be taken with valuable first round picks, sometimes teams just cannot help themselves as they search for the next Patrick Mahomes or Josh Allen. Given the events that have unfolded over the course of the last week, it seems that once again this could be the case in the 2022 QB draft class. If this is indeed the case, it would be a great thing for the Minnesota Vikings.

This past weekend, we got to see the NFL scouting combine return to the fold after a year-long hiatus due to COVID-19. It was great to see this event return, and it undoubtedly rose the draft stock of a number of prospects. Though for the QB class as a whole, it seemed like a bit of an underwhelming weekend, especially for the QBs currently in the 5-8 range at the position.

On the other hand, one player that certainly stood out was Malik Willis. He did not run the 40-yard dash, but on the field the Liberty prospect’s throws were accurate. He also uncorked a few 60-plus yard bombs to boot. Willis is already the player with the highest upside of the 2022 QB draft class, and with that performance, he almost certainly rose into the top-10. There are even rumblings that the Detroit Lions could take him at No. 2 overall.

It turns out all the Aaron Rodgers trade/retirement drama was just that: drama. On Tuesday, the veteran QB announced he would be staying in Green Bay for at least the 2022 season. Early reports suggested a four-year/$200 million deal for Rodgers, but he himself quickly shot that notion down via Twitter.

Then just hours later, it was announced that Russell Wilson would be traded to the Denver Broncos for a package of draft picks and players. Neither move was especially shocking given how the 2021 season played out, but it immediately took two of the hottest commodities off the market in the span of about four hours. If anyone was hoping to trade for Rodgers or Wilson (i.e., the Pittsburgh Steelers or New Orleans Saints), they now are forced to turn towards lower free agent candidates or the draft. This could mean a potential trade up in order to outduel one another for a prospect that Kenny Pickett.

The Aftershocks Are Beneficial for the Vikings

Included in the package received by Seattle in the Russell Wilson trade was the No. 9 overall pick. Of course, they also received Drew Lock in the deal, but I think it’s clear their intentions are to get a quarterback in this draft. Between Detroit, Carolina, and now Seattle, it is all but guaranteed that at least Malik Willis will go in the top 10. Then, the Washington Commanders cannot be left out of the quarterback picture at No. 11, and an aforementioned trade by either of the Saints or Steelers could be in order to find their own QBs of the future.

Overall, a heightened market of the 2022 QB draft class is great for the Vikings simply because it means a greater chance that they land who they want. Whether that’s a cornerback like Ahmad Gardner or an edge rusher like Travon Walker, this is huge for Minnesota to get a star in the first round.

Finally, the recent trades mean Kirk Cousins is realistically the highest quality quarterback on the market for the rest of the offseason. That means Minnesota will receive more calls about their QB, and they can raise their asking price for him. If they manage to get an additional first round pick for Cousins (they would), the Vikings cannot be left out of the conversation for drafting a quarterback, either. No matter what, this next month and a half leading up to the draft should be a roller coaster ride, so buckle in. 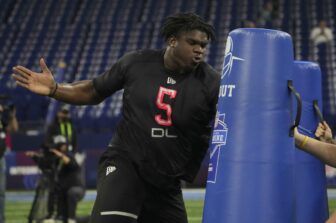 Also Read:
Jordan Davis Should Be on the Vikings Radar
Share: