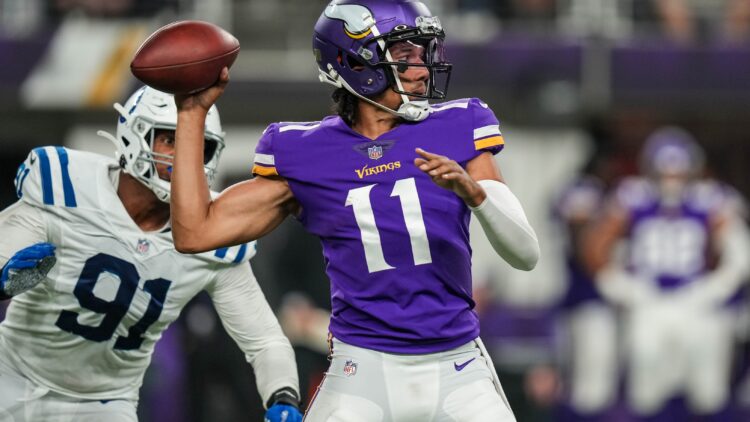 Anytime a team selects a QB in the draft there will be some excitement to see what that player can become. This was certainly the case when the Minnesota Vikings took Kellen Mond in the third round of the 2021 NFL Draft. Even with the buzz (and a bit of confusion) behind the draft pick, no one would have expected what was about to happen in 2021. Here is the story of one of the more controversial Vikings players despite being a teammate that played such a little role in the actual games.

The only reason the Vikings were able to draft Kellen Mond in the first place was because of their draft day trade that eventually landed them Christian Darrisaw as well. In that trade, the Jets sent Minnesota the 66th and 86th overall picks. As you know, the Vikings took Mond with the 66th pick, one spot ahead of Houston’s selection of Davis Mills.

This made Mond the second Minnesota Vikings draft pick of the 2021 NFL Draft, but one that didn’t seem like he would play much role in 2021. Still, the pick made some sense. The Vikings were eventually going to have to find their successor to Captain Kirk Cousins, and this was as good a spot as any. Now, it was time to look forward to what the rookie could do in training camp and preseason.

The summer of 2021 got off to quite the rocky start for multiple Vikings rookies. Christian Darrisaw and Wyatt Davis were more often seen in street clothes than in the actual practices, and then there’s the Jaylen Twyman situation where he suffered four gunshot wounds while visiting family in Washington D.C.

While Mond was able to start off his training camp strong with a couple impressive practices, it was quickly halted by an extended stint on the COVID reserve that infamously took out every Vikings QB other than Jake Browning. A strong training camp finished in frustrating manner for Mond.

Mond remained largely unknown following his shortened training camp, but after a 10-day quarantine, he was cleared off the COVID list just in time to play in the Vikings first preseason game. As should have been expected, Mond experienced some growing pains throughout his preseason debut. He finished the day 6-16 passing for 53 yards along with five carries for 25 yards. All in all, not terrible for a guy that came out of quarantine just a couple days before.

The second preseason game was Mond’s least impressive, though. With underwhelming performances by Jake Browning, this was his opportunity to grab the backup QB role by the horns, and the rookie just wasn’t able to do so. The pressure of the moment seemed to get to Mond at times, and the game just looked like it was moving faster than he could react.

Mond’s preseason finale was his shining moment, though. After a disastrous performance the week prior that had Vikings fandom questioning his ability, he closed the trio of games with his best game yet against the Kansas City Chiefs. He led the Vikings on their first offensive touchdown of the preseason capped off by a 32-yard rush by A.J. Rose. Mond completed three passes for 19 yards and had a 14-yard scramble on a fourth down conversion during the drive. The Vikings ended up losing this game, but Mond showed progression throughout and seemed much more comfortable making throws downfield.

Following a strong conclusion to the regular season, it seemed that Kellen Mond had an excellent chance at being the Vikings backup quarterback. That is, until Minnesota brought back one Sean Mannion on September 2nd. The Vikings signed Mannion to the practice squad, and they almost immediately brought him up as the backup to Cousins.

After that point, Mond really disappeared from view for much of the regular season. As QB3, Mond was inactive for the first 14 games of the season, until once again, COVID reared its ugly head in the Vikings locker room. Sean Mannion tested positive ahead of Minnesota’s game against the LA Rams, and with that, Mond moved up in the depth chart to be Cousins’ backup.

Then a week later, Cousins tested positive, leaving a big decision to be made. Would the Vikings start Mannion or Mond against the Green Bay Packers? It made most sense, to me at least, for Mond to start, but ultimately Minnesota opted for Mannion. As expected, it was an ugly game. Mond did get into the game for three plays, but the Vikings went three-and-out, and we never heard from him again.

Then in what might be the most memorable moment of the 2021 Minnesota Vikings season, Mike Zimmer was quite blunt about his opinion on Mond and whether or not he wanted to see him take reps in the meaningless season finale.

Things Can Only Go Up from Here

Between a preseason uproar from the fan base about his skills and a complete dismissal from his head coach, 2021 was a rough year for Kellen Mond. It never really felt like the QB got a fair shake after Mannion was brough onto the roster. Maybe that has to do with his under-developed talent, or perhaps it has to do with a crusty head coach that didn’t see him in a favorable manner. I still have a running theory that Zimmer never really got over Mond’s positive COVID test that derailed the training camp practice. He certainly spent a lot of time talking about vaccines as well as praising Jake Browning following that practice.

Without a doubt though, there is a talented QB within Mond. He showed flashes of it throughout the preseason even if we never got to see it during the regular season. Perhaps with a full offseason of development and a new regime, we will be able to see more from him in 2022.