Jordan Davis Should Be on the Vikings Radar 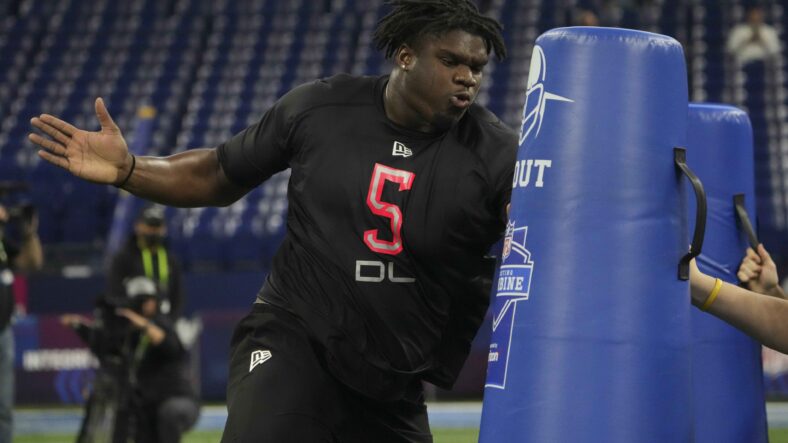 The age old question of the NFL Draft is whether teams should pick prospects based on need or value. There is no clear-cut answer to this question, especially for a mid-tier team like the Minnesota Vikings. That said, one player that could address both value and need is the massive defensive tackle out of Georgia, Jordan Davis.

Of course, the top choices for the Minnesota Vikings are likely still cornerbacks such as Ahmad Gardner or even Derek Stingley Jr. What happens if both those players go off the board early on, though?

This is a very real possibility that fans need to be prepared for, especially with how well Gardner tested at the NFL Combine last weekend. Stingley didn’t participate in the combine and has struggled with injuries for two years, but his freshman tape is some of the best college football we’ve ever seen. It could be enough to speak for itself.

If cornerbacks start coming off the board, Minnesota may be forced to change its focus to the defensive front and address the secondary later on. There are plenty of talented prospects in both areas of this draft, so one strategy really shouldn’t be viewed as better than the other.

Early on in this draft process, Jordan Davis might have been viewed largely as a one-trick pony. For Georgia he was a massive player in the middle of the defensive line that mainly acted as a run stopper rather than a three-down player.

However, it is now evident that this is a narrow viewpoint in terms of Davis’ potential. The smaller role for the 341-pound lineman was due in no small part to the sheer amount of NFL talent on the Georgia Bulldogs roster. It’s become evident with how many of them are now viewed as potential NFL starters, particularly in the 2022 class. I fell into this trap as well and am going to make amends.

I’m now here to say Jordan Davis could be the most impactful defensive player in this draft class if he stays healthy. There was no doubt that he had power. He’s built like a tank and should have no problem overpowering opposing interior o-linemen. The major surprise is just how athletic Davis actually is.

As you’ve no doubt heard by now, Davis ran an otherworldly 4.78 40-yard dash and broad jumped over 10 feet. Even more impressive was his 1.68 10-yard split. For reference, Danielle Hunter’s split was 1.57, but he also weighed 89 fewer pounds during his combine. This explosiveness is nonexistent in the NFL for someone of Davis’ size, or just in general for that matter, making him one of the few true unicorns in football.

Because of that reality, we need to be open-minded about the things Davis can do at the NFL level. For instance, I believe the Vikings could utilize him all over the defensive line; he doesn’t have to be exclusively a tackle. Especially in a Vikings 3-4 format, he could absolutely be one of the three players with hands in the dirt.

I don’t even think he would struggle too terribly if he had to play a couple snaps stepping back in coverage. His footwork and balance throughout the combine’s on-field drills was impeccable, and there is no question he can move quickly in all directions. It won’t be what makes him his money, but I think it could be part of his skill set.

Many people already believe that taking an edge rusher should be prioritized in the first round. Imagine if that edge rusher is a 6’7” 341-pound beast, and then imagine the possibilities of putting that behemoth of a man on a defense that already has Danielle Hunter, Dalvin Tomlinson, and Michael Pierce. That sounds pretty good to me. If you’re as excited about Davis as I am, feel free to read more on the prospect over on VikingsTerritory.