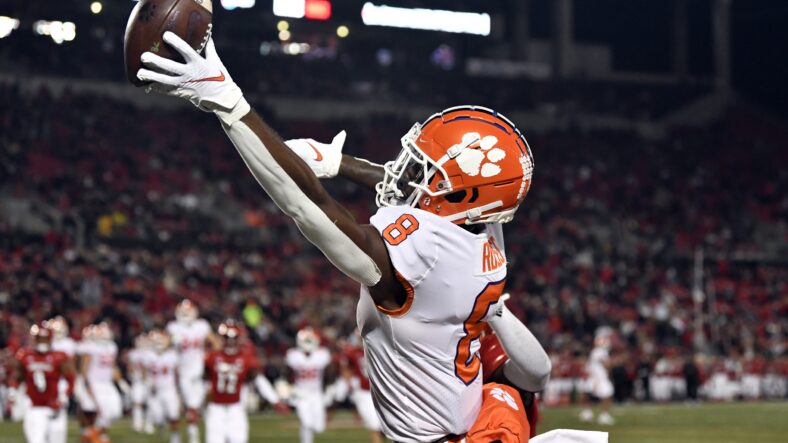 With a new GM and new head coach running the Minnesota Vikings, it’s harder than ever to say how the team will draft this spring. Things like positional focus and trades whether up or down are impossible to predict until we see it happen. That’s the fun in this, though. The uncertainty opens up the potential for a multitude of possibilities. With that, I decided to take my first stab at a full Minnesota Vikings mock draft, including a pair of trades. The mock was done using NFLMockDraftDataBase.com, so make sure to go check out that site and play around with your own mocks. Here is the full list of selections made in my draft:

*: Pick acquired in a trade

I do believe that the Vikings trading the No. 12 pick in this draft is a very real possibility. In all likelihood, that trade probably moves them down in the draft order. This draft class doesn’t have a ton of top-tier talent, but it is as deep as we’ve seen in years in terms of that second tier. With that in mind, here is the list of names that were off the board by the time 12 rolled around in this particular mock:

I was hoping Stingley would fall two more spots, but the Jets snatched him with their second pick in the top-10. However, I still felt very good about the options available, including names like Tyler Linderbaum, Trent McDuffie, Andrew Booth, etc. Because of that, I felt comfortable sliding down the order a couple spots to maximize my opportunities at taking advantage of this class’ depth. Here’s the trade:

This felt like a win. I was able to grab an additional Day Two pick, and all it really cost me was a fifth rounder. Then just three picks later, I was still able to snag a quality CB in McDuffie while setting up what looked to be a very busy second day with three selections.

The second day of the 2022 NFL draft could end up being the most impactful when we look back on this draft class in 3-5 years. Because of that, one of my focuses going into this mock was acquiring at least one other pick on this day. With that taken care of on the first day, I went into this second day with a BPA drafting focus. That landed Minnesota more help in the secondary with hard-hitting Cincinnati safety, Lewis Cine, who has a playstyle that is very comparable to Harrison Smith. Brandon Smith will also provide support in the pass rush as an OLB/DE hybrid.

That said, the pick I am most excited about on this day was third one. Justyn Ross was someone that I was watching very closely. He’s likely going to fall because of his serious neck injury that cost him the 2020 season, and while his numbers weren’t stellar in 2021, there’s little doubt that the NFL will have a role for him. Creating a receiving cuatro of Adam Thielen/Justin Jefferson/KJ Osborn/Justyn Ross could be devastating. I had to snatch him up.

Overall, I felt quite good about how the mock had gone to this point. A rejuvenated secondary, a pass rusher, and a high ceiling receiver are all improvements for this roster. Going into Day Three though, I saw a lot of talent still on the board. With three sixth rounders and a seventh, I was hoping to find some more depth pieces. As I watched the fourth round begin to unfold, there was one name that I saw at the top of my board that I eventually had to go get: tight end Jake Ferguson. Here’s how the trade with the Ravens went down:

Ferguson is a guy that has TE1 potential for this class and seeing him in Day Three was too enticing to pass up on, especially for just a pair of picks. Then with the first of three sixth round picks, landing RB Jerome Ford felt like a big win. Ford is a sturdy back that could be very useful in 3rd-and-short situations or as a goal-line back. If C.J. Ham ends up being a cap casualty, Ford could take on a lot of those blocking roles while still being able to make plays with the ball. Then the final two picks of Andrew Stueber and Jeremiah Moon were mostly to provide some intriguing depth options in the trenches.

I wouldn’t say that I went into this mock draft intending to put a ton of focus on the offensive side of the ball, but it certainly ended up that way, especially with the later picks. Overall, I would say this would be an intriguing class if the Vikings ended up going this route. I think McDuffie and Cine in the secondary have a chance to be a dynamic duo moving forward. Minnesota also needs some tight end depth, and Ferguson could provide much of the same production that Conklin did in 2021, especially given a year or two to develop under Irv Smith.

If I could change anything about this draft, I would like to find an interior offensive lineman or EDGE. Brandon Smith being the headline pass rusher in this class is a bit underwhelming and means the Vikings would have to put an emphasis on the position in free agency. Additionally, I was hoping to still be able to land Tyler Linderbaum in the first round, but he ended up going one pick earlier at No. 14 to Baltimore. This leaves that area to free agency as well, but there are a number of options for the Vikings to choose from on the market. This is just one of many Vikings mock drafts that will be done moving forward, so stay tuned throughout the spring!