After the Minnesota Vikings announced on Tuesday that rookie CB Andrew Booth Jr. would miss the rest of the 2022 season after undergoing surgery to repair his meniscus, they got some positive injury news on Wednesday. Vikings TE Ben Ellefson is set to return from IR this week.

Ellefson has been on IR since Week 5 with a groin injury that he suffered during Week 4 against the New Orleans Saints. A week before the injury, the fourth-year tight end had one of the best games of his career in a start against the Detroit Lions. He caught a pair of passes for 24 yards, marking his first multi-reception game of his career.

It’s been exactly 21 days since Ellefson was designated to return to practice, making Wednesday the final day that the Vikings could activate him off of IR. If they did not do so, he would have forced to remain on IR for the rest of the season.

Ellefson’s return to the field is less dire than it would have been early in the year. Since then, the Vikings made a trade deadline move to acquire T.J. Hockenson, and over his first four games as a Viking, he’s recorded 26 receptions for 192 yards and a touchdown.

However, the tight end provides a major boost in the run game with his blocking. That has always been Ellefson’s forte as a player, and it will be a positive to get him more snaps this season. 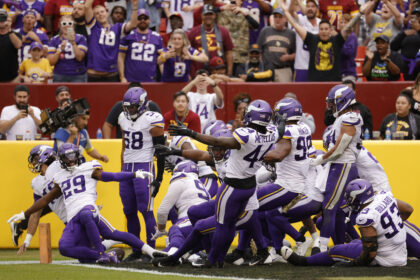