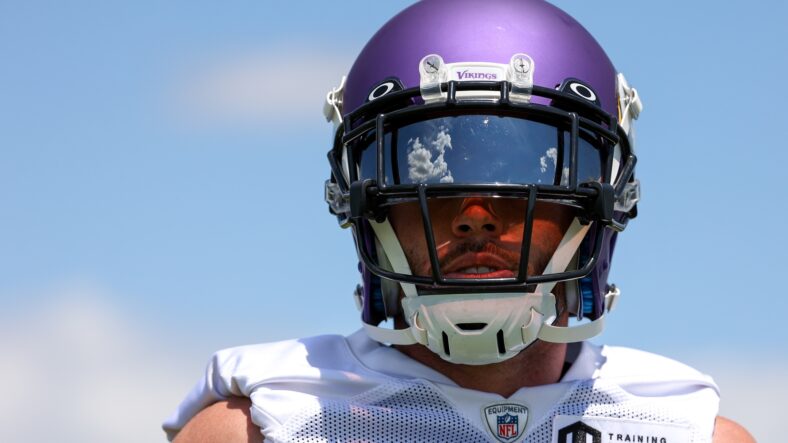 The following questions are about current Minnesota Vikings topics, answered by PurplePTSD. Today is the September 21st edition, addressed in a from-the-hip fashion. If you have questions, please email them to DustinBakerNFL@gmail.com.

Q: Will Lews Cine get the start if Harrison Smith doesn’t clear the concussion protocol by Sunday?

Head coach Kevin O’Connell sounded optimistic about Smith’s chances to play against the Lions, though.

Otherwise, if Cine is not trustworthy just yet, safety Josh Metellus would get the nod. But let’s hope for Cine, as it would be odd for a 1st-Rounder not to be the next man up.

Q: It’s probably tough after a nasty loss, but who’s been a pleasant surprise from the Vikings so far?

He’s not total gangbusters yet, but he does have the sixth-best Pro Football Focus grade on the team through two games. And for Vikings fans, a right guard that high on the list is a “we’ll take it” scenario.

He must improve via pass protection — story of the Vikings in the last decade, right? — but his early-season production is welcomed. The PFF grade is a respectable 67.8.

Q: Do you expect Jalen Reagor to see more action on offense after the Vikings used him a bit more on Monday night?

A: Yes. The Vikings offense is known as “complex,” so it likely took Reagor an extra week to get up to speed.

After all, Reagor is the WR4, and these aren’t the “old days” with Mike Zimmer, where wide receivers were ignored after WR1 and WR2. Reagor’s utilization at Philadelphia was merely a preview.

And, truth be told, when the Vikings handed him the ball on Monday, he didn’t look half bad.