Is it Patrick Jones Time? 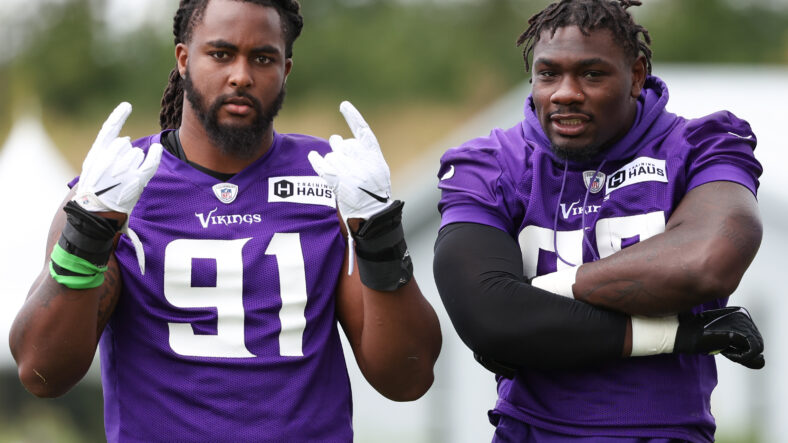 Patrick Jones II has turned some heads recently at Vikings Training Camp. The second-year edge rusher may be just what the Vikings will need this upcoming season.

He was drafted by the Minnesota Vikings with the 90th pick in 2021. In his rookie year, Jones’ role was minor. He saw the field in just 9 games and played just 99 defensive snaps for the Vikings. He finished the year with 7 tackles.

In his final college season, Jones put together 9 sacks. The year before, he had 8.5 sacks. Over the same two years, he had a combined 24 tackles for a loss. Keep in mind that he accumulated these stats over 22 games.

This year, Patrick Jones is looking to make more of an impact. The 6’4, 264 pound edge rusher has shown the ability to defend well against the run. He’s able to hold his spot, stay in his gap, and use his hands effectively. Jones also has pass-rush potential. He has some solid pass-rush moves, something he presented in a one-on-one with Brian O’Neill Wednesday in Training Camp.

It seems that Jones has given himself a chance to be the third edge rusher. He has to surpass D.J. Wonnum, Luiji Vilain, Janarius Robinson, and Andre Mintze to secure the job.

Outside of Danielle Hunter and Za’Darius Smith, the Vikings desperately need an edge rusher to make an impact on the field. Patrick Jones II could be that guy. Having a rotation of good edge rushers is key for keeping guys fresh throughout an entire game. Moreover, the Vikings’ two star edge rushers, Hunter and Smith, have dealt with injuries in the last few seasons. Jones can hopefully bring some security in case of one of the two need to miss time. His ability to play the run and also provide some impact in the pass-rush can make him an important piece in the Minnesota Vikings defense.