The Tiers of Fantasy Football RBs

Let’s face it, everyone is looking to get an edge on their fantasy football competition by doing research before the season begins. That’s why you’re here, and if you need additional help, Purple PTSD already has a QB ranking with players from each team. Now, here is a comprehensive list of running backs, including 50 players at the position.

Just like with the quarterbacks, we get started with some players that might not necessarily command a spot on your rosters, but they should be given looks on a week-to-week basis depending on the matchups. If someone in the higher tiers gets hurt, like a Christian McCaffrey or Derrick Henry, these guys could be who you have to go with to replace some production.

Tier 5: Current Backups Who Could Be Starters

Between youth and injury history in the RB rooms, these are players that may not be seen as starters right now but could eventually step into that role as the season goes on. Similarly to my “Draft and Stash” tier for the QB rankings, I’d do the same thing with these backs.

One player to particularly keep an eye on here is Travis Etienne. Etienne missed his entire rookie season for the Jaguars last year, but they were doing some very interesting things during practices with him at receiver. Doug Pederson should only enhance these roles as the new head coach. Given that Etienne and QB Trevor Lawrence spent their college careers together at Clemson, it shouldn’t take long for them to get on the same page in this offense.

Tier 4: Steady as They Go

For these players, you’re looking at a lot of 8–to-12-point performances on a weekly basis. I don’t foresee many of these backs having huge years because of their QBs being massive parts of the scoring offense, injury history, other players in the backfield, or a combination of the three. However, especially in deeper leagues, you can’t go wrong with drafting these backs as an RB2.

Keep an eye on Elijah Mitchell in this group, though. Mitchell was thrown into a major role in the San Francisco offense when Raheem Mostert got hurt, but then an injury of his own took him out for portions of the year. Mitchell should take the reins from Week 1 this season, and regardless of who the QB is for the Niners, running the ball should remain the focus for this team.

Five of the six running backs in this list have had major injuries in the past 18 months. The other, Alvin Kamara, enters 2022 with legal troubles due to his fight in Las Vegas the night before the Pro Bowl. There’s a big risk of all these players missing 6+ games in 2022, but if they’re on the field, they’ll all play a major role in their offense. There’s potential for huge reward here, so these players should go off the board early. If they miss extensive time though, that reward could soon turn to nothing.

Not only are these players going to rack up the rushing yards, but they also carry the potential for 10+ TDs and some sort of threat in the receiving game. If you want to go in a direction other than running back in the first round, these are the players that should grab your eye in Round 2.

Particularly, AJ Dillon is a guy that may break out in a big way for the Green Bay Packers. He already showed he can be a three-down back when Aaron Jones was out with injury, but he may actually win the job outright this season. Especially with Davante Adams out of the picture, Green Bay may become a more run-based offense in 2022 while Aaron Rodgers gets to know his new group of wide receivers.

These players should all be off the board in the first 15 picks of the draft. Each and every one of them carry the potentil for 100+ yards from scrimmage, but also a touchdown or two on a weekly basis. Assuming King Henry reclaims his crown in 2022, they should all be available to play on a weekly basis too. You may have to pencil Dalvin Cook in for two missed games, but he has largely dodged the injury bug that plagued him early on in his career. Feel comfortable taking any one of these backs with your first pick. 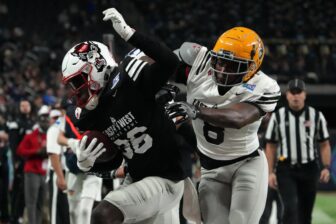