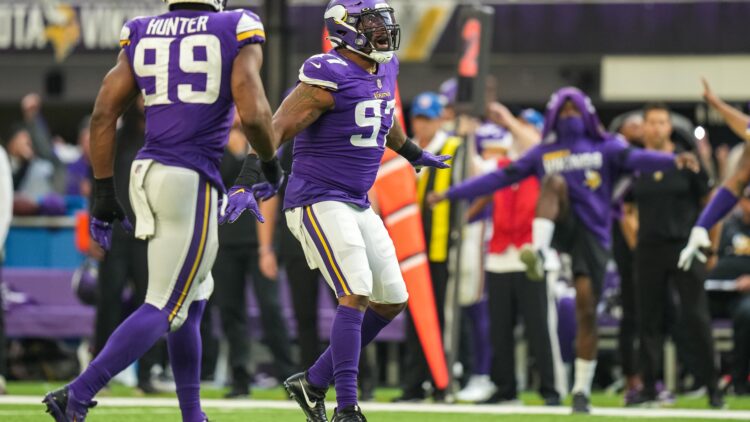 When the Minnesota Vikings brought back long-time defensive end Everson Griffen during the 2021 preseason, many fans scoffed. During a rough 2020 season where he spent time in both Dallas and Detroit, Griffen only racked up six total sacks. Through five weeks of the 2021 season, Griffen is showing that, perhaps, he never lost a step. His performance in the Vikings’ Week 5 victory over the Lions was his best output of the season so far.

Getting his first start of the season, Griffen played 49 of 68 possible defensive snaps. This ranked second among all Vikings’ defensive linemen as he split reps with Danielle Hunter and D.J. Wonnum.

Griffen did more than just suit up, though. He racked up two sacks on back-to-back plays near the end of the first quarter. After working rookie left tackle Penei Sewell for a sack on Jared Goff, Griffen again embarrassed the 2021 first-round pick for another sack a play later. The ball came loose, and defensive tackle James Lynch recovered the fumble to set up the Minnesota offense. The Vikings would kick a field goal to capitalize on the turnover, tying the game at 3-3.

In total, Griffen had a 75.9 grade from Pro Football Focus, good enough for seventh overall among Vikings defenders. According to PFF, he added three hurries and one hit on Goff. This led to a 90.7 pass-rush grade, tops among all Vikings and highest in the league among defenders with at least 20 snaps.

The Vikings do need to monitor the number of snaps that Everson Griffen has now that he is approaching 34 years old. However, as defensive coordinator Andre Patterson alluded to on KFAN this week, Griffen deserves to start moving forward. Although D.J. Wonnum had a sack on Sunday, he hasn’t splashed like Griffen and at this point appears to be a role player at best.

Combine that with Griffen being the longest-tenured Viking, and him threatening to become the permanent starting defensive end opposite Danielle Hunter shouldn’t be a surprise. He is outperforming even the most optimistic Viking fan’s preseason expectations. His four sacks rank second on the team behind Hunter. With another solid performance against the Panthers this Sunday, it will be tough for the Vikings to take Griffen off the field moving forward.