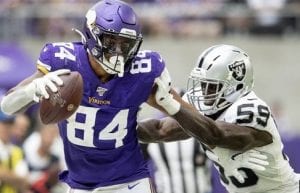 The Minnesota Vikings are undergoing a process unfamiliar to the organization for nearly a decade – tight end turnover. Not ‘turnover’ in interceptions or fumbles but that of personnel.

Tight end Kyle Rudolph was selected by the Vikings from Notre Dame with a 2nd-round pick in the 2011 NFL Draft. Since then, Rudolph has been the undisputed TE1 with quarterbacks from Christian Ponder to Kirk Cousins. While his abilities are not outwardly diminishing, his price tag is not currently congruent to the Vikings salary cap – or the method he is utilized in Minnesota’s offense. That is probably why general manager Rick Spielman chose Irv Smith Jr. in the 2019 NFL Draft with a – you guessed it – 2nd-round pick. Smith Jr. hails from the University of Alabama, a school world-renown for collegiate lordship and annual glory.

On emphasis within the Vikings offense, Rudolph is on his way out — and Smith Jr. is on his way in. Per average annual salary, Rudolph is slated to be the NFL’s sixth-highest-paid tight end in 2021. He ranked 39th in the league for targets during 2020. As the season wound down, Rudolph missed four games to injury, but even before that, his typical utilization frequency in the Vikings offense was dwindling.

Rudolph will not be a part of the 2021 Vikings offense at a $9 million price tag. He can restructure his contract if that tickles his fancy or he can join a new franchise. Put bluntly – Rudolph is too expensive

Irv Smith Jr. – on a rookie deal – is not. His emergence is underway, albeit in a miniature manner, as the team already has playmakers like Dalvin Cook, Adam Thielen, and Justin Jefferson. With Rudolph eventually “out of the way,” Smith Jr. will continue his efflorescence.

And he took sizable steps toward this in 2020.

Foremost, Smith Jr.’s ascension inside the Vikings offensive gameplan has not been Rob Gronkowski-esque. But nobody historically has really emulated Gronkowski before or since.

The 22-year-old Smith Jr. is blossoming adequately for a player splitting attention with the aforementioned Cook, Thielen, and Jefferson. Hell, Smith Jr. splits attention with two other men at his position – Tyler Conklin and Rudolph.

Per target, though, Smith Jr.’s 2020 performance was commendable – particularly in the redzone. He notched five touchdowns in 13 games on 43 targets. Most TE1s that are primarily showcased in an NFL offense attract around 90 targets. That would theoretically place Smith Jr. at about 10 total touchdowns – in 13 games. That is Darren Waller and Travis Kelce territory for touchdowns scored.

Given the opportunity to be “the guy” in the Vikings TE room, Smith Jr.’s knack for scoring is trending wonderfully – especially for his age.

There is more to pass-catching than just touchdowns, but scoring is a gigantic facet. Coincidentally, that is Smith Jr.’s early-career niche. If you are a Vikings loyalist [you are], you’ll take it.

Smith Jr. will be 23 years old during the 2021 season. Through his age-22 season, Smith Jr. has accrued seven touchdowns. That ranks ninth all-time for tight ends through age 22. The mark dangles him the category of Todd Heap, Jason Witten, and Chris Cooley in this metric. Those tight ends that thrive in this statistical parameter [and far exceed Smith Jr.’s seven scores] are the players that were heavily targeted from the onset – like Rob Gronkowski, Aaron Hernandez, and Mike Ditka.

The Vikings have opted not to solely fixate on Smith Jr. because of Rudolph’s presence on the roster. And deservedly so – Rudolph is another talent who is notable for scoring and clutch catches.

The time for Smith Jr.’s takeover is now. Inklings of his talent were sprinkled into games throughout the 2019 and 2020 seasons. He is essentially a muscular wide receiver, not a brute-force, smashmouth tight end like Jim Kleinsasser of yesteryear. Smith Jr. is closer to Antonio Gates than he is Mark Bavaro.

His aptitudes in this mold are more conducive to the modern NFL than bowling-ball type tight ends of years past. It’s why men like Travis Kelce, George Kittle, and Darren Waller are first off the board in fantasy drafts. Smith Jr. is not quite in the pantheon with those personalities, but he has the tool bag to join them with some skillset development and attention from Kirk Cousins on the field.