Financial Forecast Suggests a Storm is Brewing for Vikings 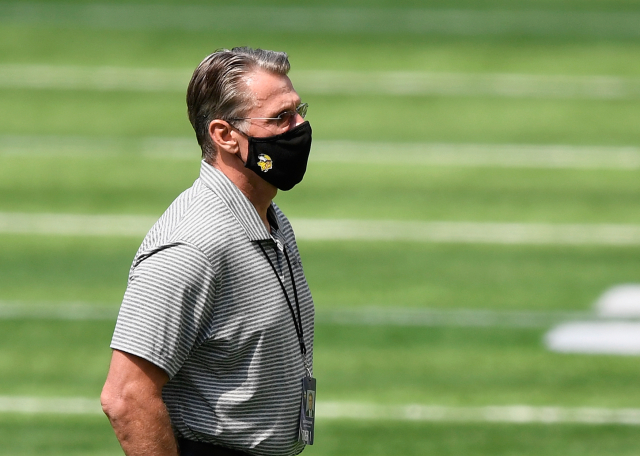 Meteorology has never been my strong suit. Many of Purple PTSD‘s faithful readers would similarly suggest that writing about football isn’t one either, but I digress. The point is metaphor, folks. People who know far more about financial football suggest the Vikings may be dealing with a tricky situation next season. A storm may be brewing.

Before we go too far, let’s take a moment to discuss what that does and doesn’t mean. It does mean the Vikings will likely have to make some difficult decisions during the offseason to make the money work. It also means not all fans will be completely satisfied with how the money is divided up. That being said, it doesn’t mean the Vikings are in for complete disaster. If you prepare for a storm, you can often get by just fine. One thing that Rick Spieman has repeatedly said is that the team plans their budget years in advance. Nothing about the 2022 budget should come as a surprise to Spielman & Friends.

With that caution out of the way, take a peek at this tweet:

Take a peak at what Sean Borman – who writes for Vikings Territory – said to follow up:

If both of those players are healthy and play at an elite level, the financial component of things could make sense for the Vikings. There’s very little guarantee of that, though, so the Vikings will almost certainly be looking to adjust at least one of those deals. I reached out to Sean Borman to get his sense of the financial situation for the Vikings moving forward. I asked him how dire things were looking in 2022 and if the team could be active in free agency. Here is his response:

“If you’re looking for a quick answer, then it’s the status quo.

The Vikings, through a combination of releases, re-signings, restructures and extensions, have left themselves with plenty of wiggle room to remain cap compliant through the offseason. That’s the benefit of having one of the best cap managers in the NFL in Rob Brzezinski.

But let me tell you why this year is different.

First of all, there aren’t as many opportunities as usual to create cap space. Outside of the top-2 earners, it’s slim pickings compared to years past, mainly due to void-year contracts and kicking the can down the road (partially a product of the lower salary cap this season).

There’s enough dead money on the books that it can’t be ignored.

But most importantly, this could FINALLY be the year when some MAJOR changes are made within the organization.

It’ll be incredibly interesting to see how the rest of the season plays out because, depending on who’s running the show, the Vikings’ offseason could go in a number of different directions.

The most impactful decisions involve the futures of Kirk Cousins and Danielle Hunter. These two players currently account for over $71M in cap space next season – 33% of the team’s total 2022 cap space.

With both contracts structured in a way to be redone this offseason, it would seem likely the CURRENT regime would focus on extending each player.

Extending Cousins and Hunter would free up a substantial amount of cap space. These two moves alone would put the team in a healthy position to re-sign some of those players on 1-year deals and give them a decent amount of spending money for free agents. They might need to restructure more players down the road (like Thielen, Pierce, etc.) depending on how they attack free agency, but that’s something the current regime is very familiar with.

If a NEW front office takes over, they may see things differently.

Freeing up ~$50M in cap space by trading Cousins and Hunter and adding some early draft picks might be a great way to make a splash.

Minnesota is currently projected to be $6.3M OVER the cap after the season (per http://OverTheCap.com). That shouldn’t be a worry.

There aren’t many in-house free agents that NEED to be prioritized.

It might be nice to have Anthony Barr, Patrick Peterson, Bashaud Breeland and/or Sheldon Richardson back, but they’re all making more than $3M/year and none of them have lived up to their contracts so far. There are certainly better value plays out there.

Xavier Woods has been pretty solid but the team may look to start Cam Bynum at safety next year next to Harrison Smith.

Mason Cole, Nick Vigil, Jordan Berry and Rashod Hill could be brought back at the right price, but they shouldn’t be expensive.

Then you get to decisions like Tyler Conklin, who becomes an unrestricted free agent. The rest are basically veteran minimum guys.

We’ll see how the rest of the season goes but I believe Conklin has earned an opportunity with another team as a potential starter and don’t expect him to return.

All this to say, there aren’t many team needs at the moment.

So, to answer your question in long-winded fashion, yes, the Vikings do have some flexibility to be active in free agency. How they create the cap space to do so will be the exciting part.“

Sean provides an excellent answer, something I’ll add to with a few of my own thoughts.

Of course, Cousins and Hunter aren’t the only two well-compensated players. Adam Thielen is set to count for nearly $17 million against the 2022 cap, making him a prime candidate for a restructure. Dalvin Cook will account for more than $12 million. Michael Pierce will have a $10.5 million cap hit. C.J. Ham will make nearly $3.5 million. Each one of these players have a reasonable chance of being asked to restructure, extend, or be cut. Heck, we may even see a trade of two. The Vikings therefore have some flexibility when it comes to making the financial end of things work.

Currently, the team is more than $6 million over next season’s projected salary cap. We already know that there are going to be plenty of impact free agents available. We also know that a full rebuild shouldn’t be necessary since there is so much youth in place. In other words, new leadership likely won’t insist on a total tear down. Rather, the team will likely look to reload, not rebuild, if the team does move on from its current coaching staff (possibly in pursuit of a dynamic offensive mind).

Depending on how things shake out over these next couple weeks, Vikings fans will know whether they ought to keep their focus on this season or begin looking toward the future. A loss to the lowly Lions would be disastrous for the team. Getting to 6-6 should be automatic. From there, the team takes on the underwhelming Steelers at home.

Anything less than 7-6 would be a disappointment. It would likely mean looking toward the future.