The Vikings Linebacker Depth Could Be Key to a Playoff Run 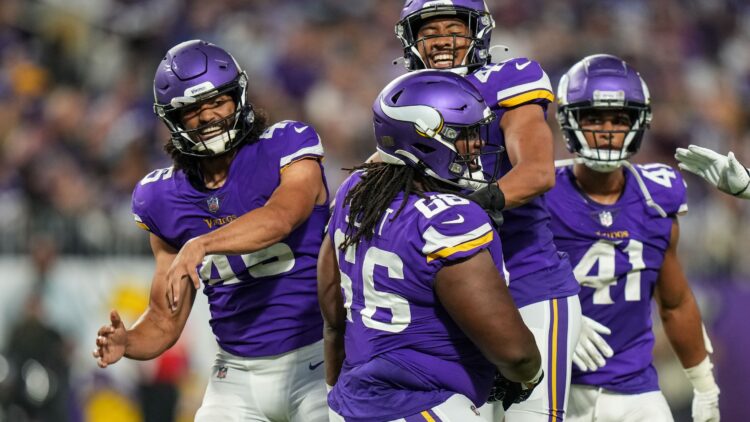 Earlier this week, I posted an article here on PTSD breaking down some of the position battles around the Vikings roster right now. There are a lot of them right now, but one position that I purposefully left out was linebacker. I wanted to do an entire article on the LB room because it didn’t feel like I could do it justice in just 100 or so words.

After a 2020 season in which there was not much depth to speak of at any defensive position, there seems to be oodles of talent at LB this year. Combine that with a mysterious injury status, and this could be an intriguing position to watch going into Friday’s final preseason game.

Anthony Barr: Out for Week 1?

First and foremost, we have to talk about the Anthony Barr situation. Barr missed all but two games last season with a torn pectoral muscle. His absence was certainly felt throughout the year, especially against the run due to his ability as a blitzer.

The Vikings were certainly looking forward to having him back this year, but hopes may be tempered for now. On Tuesday, co-defensive coordinator Adam Zimmer told reporters that he couldn’t say if Barr would be available for Week 1 in Cincinnati. This comes just days after Mike Zimmer very cryptically danced around the situation, saying that Barr was “dealing with something”.

Obviously, this is concerning. Barr should be set to feast against opposing offenses this year, given the additions Minnesota made on the defensive line. The situation is also reminiscent of last year’s Danielle Hunter injury. Zimmer wouldn’t answer questions on it in training camp and preseason, eventually called it a “tweak” in Hunter’s neck, and then Hunter missed the entire 2020 campaign.

Hopefully Barr’s situation isn’t that bad, but it’s hard not to think about the implications of that for both sides. The Vikings would be without their starting OLB for a second season. Not to mention, this could be a very important year towards deciding the next steps of the Minnesota franchise. For Barr himself, things aren’t good either. The 29-year-old restructured his contract this offseason, so rather than entering free agency in 2024, he now becomes a free agent next offseason. Back-to-back long-term injuries would not bode well for his free agency value.

Despite a 12-10 loss to Indianapolis on Saturday, there were a lot of good signs on the defensive side of the ball. Most notably, the linebackers played some great football. Chazz Surratt was much better in his second professional game, Nick Vigil had a pass breakup on the opening play, and Troy Dye was all over the field.

Let’s start with Surratt. The third-round pick is probably not in contention for a ton of defensive snaps this year, especially if Barr is healthy, but his impact on special teams could be felt greatly. He missed a wrap up on Minnesota’s first of many punts, but he responded with a punishing hit to Isaiah Rogers on the very next punt. Rogers was stopped for -2 yards on that particular play.

Per Pro-Football-Reference, the Vikings defense started possessions with the worst field position in the NFL. Opposing offenses’ average drives started at the 32.9 yard-line. Much of this had to do with poor special teams play as Minnesota gave up the third-most punt return yards in the league as well. If Minnesota can cut down on these yards this year, they should find far greater success; Surratt could be a big part of that.

To put the icing on the cake, Surratt also led the Vikings in tackles against the Colts. On Minnesota’s second defensive drive of the second half, he had a great series. He started of the drive with a run stop, and then he recorded a TFL with some help from Hercules Mata’afa. He may not get a ton of snaps, and his missed tackles are a bit of a concern. However, he’s certainly emerging as a serviceable backup when needed.

Should Anthony Barr miss Week 1, the Vikings are much better suited to replace him this year. First off, as aforementioned, the Vikings improved defensive line should open up more lanes for the linebackers to break free on blitzes. The job of Minnesota’s OLB will be much easier with Hunter, Dalvin Tomlinson, and Michael Pierce along the line.

Free agent signing, Nick Vigil, is locked in as a starter opposite Eric Kendricks. Throughout his five-year career, Vigil has shown flashes against the run, and he is developing into a terrific player in pass coverage. His best season came in 2019 with the Bengals when he recorded 111 tackles, three TFLs, two sacks, five PDs, and an interception in 16 starts. He probably ends up actually taking Barr’s spot, but who will be the other starting LB?

Blake Lynch got the start in last week’s preseason game, and he had some great plays, especially on the second defensive drive. It also showed the benefit of having Michael Pierce in the trenches. Pierce drew a double team on a 3rd and 2, which allowed Lynch to burst through the line of scrimmage and blow up a Nyheim Hines run short of the first down marker. These sorts of plays in key situations lead to winning football, and it shouldn’t be overlooked.

Another second-year player to watch in this battle is Troy Dye. As a rookie, Dye started five games at LLB in Barr’s absence. He’s taken some major steps forward in this preseason as well. His first half against the Colts was littered with highlight plays, including a pick-six. Then on the very next defensive snap, Dye put a massive hit on Sam Ehlinger off a front blitz. This versatility is extremely valuable for a Vikings defense that had zero touchdowns in 2020.

Of course, finding a replacement for Barr is entirely speculation at this point. We have no clear answer saying he won’t play, just as we don’t have an answer saying he will. If he were to miss time though, we have an idea of who will get the starting gig. Zimmer named all three of Dye, Lynch, and Surratt as potential candidates. The third and final preseason game on Friday against the Chiefs will probably lead to more clear answers in this department.

Personally, I would lean more towards Dye right now, but all three have had their moments. Similarly to the right defensive end position, it may ultimately be an effort by committee, too. We may see more Lynch on run coverage with Dye taking the pass coverage downs, and Surratt filling in when needed.

In the end though, Vikings fans should take a breath and realize this linebacking crew is much better suited to have success this year than last. They are more talented, more experienced, and the defensive line will take away a ton of pressure.