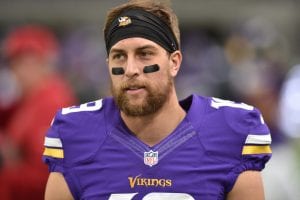 The Vikings loss on Sunday was bitter enough of a pill to swallow, but now there may be more negativity in store going into week 14. Minnesota lost to the no-longer-winless Detroit Lions this week, and in part it was due to some major injuries. One such injury occurred during the game to star receiver, Adam Thielen.

Thielen left the game in the first quarter. He was seen multiple times on the sideline trying to loosen up the ankle by jogging around, but clearly it just never got right. We now know why. The injury is being diagnosed as a high ankle sprain. Without Thielen for the remainder of the game, the Vikings had serious troubles generating offense. This was especially the case in the red zone, where Minnesota failed to score a touchdown on an early goal-to-go drive. Additionally, the Vikings attempted a trio of two-point conversions but failed on each attempt.

The final of these two-point attempts came in the final two minutes of the game, in an attempt to put Minnesota up by six points rather than four. Following the failure, all Detroit had to do was score a touchdown to win, and Jared Goff led the Lions down the field to do just that.

The Vikings now sit at 5-7 and their playoff hopes are slipping away. Even so, there’s a big chance that Minnesota’s offense will be badly short-handed this week. With the Vikings being on a short week before playing the Pittsburgh Steelers on Thursday night, it is extremely unlikely that Adam Thielen will be able to play. On that same note, no indication has been made that Dalvin Cook is ready to return from his torn labrum.

This doesn’t even mention all the injuries on the defensive side of the ball; most notably those to Anthony Barr and Eric Kendricks. The Vikings backups will likely need a big day to keep Minnesota competitive against the Pittsburgh Steelers who just beat the Baltimore Ravens.