2021 Will Bring Eggshells Once Again for the Vikings Kicking Situation 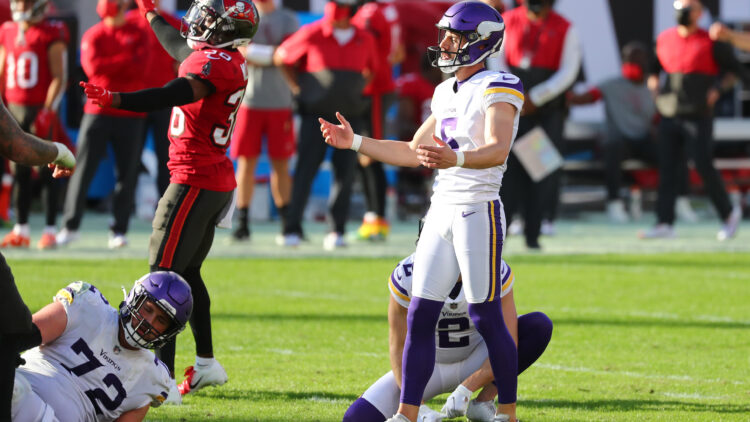 Few folks remember — or perhaps selectively misremember — that former Minnesota Vikings kicker Blair Walsh was outstanding before his career plummeted. Walsh was fabulous in his rookie season (2012) and then fairly decent from 2013 to 2015. And for Vikings faithful, “fairly decent” is considered outstanding for kickers based on past scars.

Walsh missed a playoff round-advancing field goal in a 2015 Playoff game versus the Seattle Seahawks, rekindling Vikings fans’ disdain for field-goal kicking on the whole. The resentment toward kicking never fully left the Vikings kingdom even when Walsh was paramount, but at least he was sturdy for a prolonged period.

Since Walsh shanked the game-winner against Seattle, the anxiety surrounding field goal kickers in Minnesota has been relentless. Kai Forbath provided stability for a while — drilling clutch postseason kicks in 2017 — but his malfunction was extra points. Then, general manager Rick Spielman drafted Daniel Carlson in 2018, dawning a youthful new strategy at kicker. That era lasted two regular-season weeks. Carlson, like several Vikings kickers before him, collapsed at an inopportune time, causing his prompt and remorseless exodus from the organization.

Carlson has since kicked for the Las Vegas Raiders — and he exhibits nothing near the morbid performance he put forth the Vikings at Green Bay in September of 2018.

Two aspects of kicking — extremely important ones — plague the Mike Zimmer-led Vikings. Zimmer was hired in 2014, and the kicking frustration has persisted throughout his tenure. Since the start of 2014, Vikings kickers have converted 80.9% of all field goals. That ranks 27th in NFL during the timeframe or sixth-worst. Therefore, when you’re gripping your couch cushion or spouse’s arm during field goal attempts during the last seven years — you’re justified. The Vikings do not kick fields like the rest of teams. In this regard, they trolley the bottom of the NFL for competency.

The same goes for extra-point kicking — but it’s worse. In the Zimmer era, Minnesota has a success rate of 89.6% on extra points. This is the worst in the NFL since 2014. Dead last. No team misses more extra points. No matter the kicker, holder, special team coordinator, indoor, outdoor, rainy, sunny — the Vikings just flounder after a touchdown is scored.

Zimmer jettisoned his special teams coordinator this offseason, hiring an internal candidate, Ryan Ficken, for 2021 duties. He is the hope at the moment that the Vikings special teams — particularly the kicking — can experience an upturn.

Minnesota will have another true-blue kicking competition this summer, comprised of two players — Greg Joseph and Riley Patterson.

Joseph is a veteran, spending time with the Tampa Bay Buccaneers in 2020 when Tom Brady’s squad won a Super Bowl over the mighty Kansas City Chiefs. All told, Joseph has attempted 20 field goals in his career while connecting on 17 of them. Based on a smidgen of experience, Joseph is probably the “frontrunner,” but that should not be considered take-it-to-the-bank stuff.

Spielman also signed Riley Paterson, an alumnus of the University of Memphis. He was brought aboard the roster after the 2021 NFL Draft. Patterson played in every single game for Memphis since the start of the 2017 collegiate season. In those four seasons, Patterson connected on 240 of 246 extra points (or a 97.6% success rate). For most NFL teams, that stat would be classified as “what’s the big deal?” but it’s a crucial deal for the Vikings — see above.

As for field goals, he converted 64 of 83 attempts at Memphis, a 77.1% rate. That is not otherworldly, but perhaps his accuracy will improve indoors at U.S. Bank Stadium.

While one or both of these men might be fabulous kickers in time, the great unknown or the great “what if he misses” apprehension will continue. Spielman thought he finally sealed the deal when Dan Bailey was acquired in 2018, but the demons arose in 2020. In Bailey’s defense, however, he was quite reliable in 2019.

The Joseph-Patterson combo creates only a sense of “wait and see” and eggshell-walking. That’s not an insult to the franchise but a cold reality based on seven years worth of statistics and eye tests.