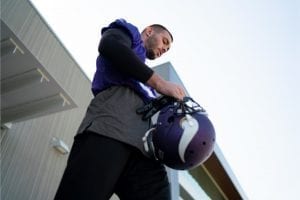 If you search for reasons as to why this 2020 Vikings season has felt so strange or hapless at times – that is your stat. A team that boasted the NFL’s best defense three years ago now ranks 25th in the industry. It’s a fall from grace that observers of the Zimmer football credo find unfamiliar.

Minnesota parted ways with Xavier Rhodes, Trae Waynes, Everson Griffen, Linval Joseph, Mackensie Alexander, Jayron Kearse, Stephen Weatherly, and Andrew Sendejo last offseason. The players that have replaced those eight men are essentially backup personnel from 2019 or rookies from the 2020 NFL Draft. Cap casualties were plentiful and the subsequent product on the field is palpable – to the tune of 8th-worst in the NFL.

Those are the changes before any mention of injury. Throughout the 2020 season, the Vikings have lost Danielle Hunter, Anthony Barr, Michael Pierce, Mike Hughes, and Eric Kendricks to some form of ailment or coronavirus opt-out. Count them – that is 13 total players (including offseason departures) that would have received ample playing time if the clock was reset to 2019. That is more souls than an entire defensive starting lineup. 11 men play defense on a given play. The Vikings lost 13 notable names to free agency or injury.

Therefore, if the expectation is that the 2020 defense will blossom to something more attractive in 2021, it will not be anything comparable to the current group of men receiving playing time. The team’s defense will likely improve, but it will not be a “run it back” ordeal or even remotely close to that motto.

The starting defensive line for the Vikings in 2020, from left to right, is Ifeadi Odenigbo, Shamar Stephen, Jaleel Johnson, and Jalyn Holmes. Here is some breaking news – three or four of those men will not be Minnesota Vikings starters in 2021.

Danielle Hunter will return to claim his left defensive end spot. Coronavirus fears will probably be vaccinated, and Michael Pierce’s contract will officially commence in Minnesota as the team’s nose tackle. Odenigbo is a player with a 62.2 Pro Football Focus grade, a decent mark. He could start again in 2021, but the team is more likely to plop the rookie D.J. Wonnum in that spot after experiencing a full year of Odenigbo.

At the three-technique spot, Minnesota has notoriously ignored fireworks from the position. Shamar Stephen lived in that roster spot during 2019 – he forced two quarterback pressures. Sheldon Richardson orchestrated 25 such pressures the year before. A 25 to 2 drop-off is disgusting, no matter how one dresses it up.

The defensive line in 2021 will entail Hunter-Pierce-New Guy-Wonnum. Stephen might skulk back into the starting role or a rookie, free agent, or Armon Watts may receive the nod. In any event, the defensive line will have wildly different faces than 2020.

Anthony Barr proved his worth by not playing, which is a peculiar way to analyze it. Poor tackling has plagued the Vikings this season, and much of that is do with Barr’s absence. In 2019, Barr netted the team’s lowest missed tackle percentage (2.5%). His 2020 replacement, Eric Wilson, has notched an 11.7% missed tackle rate thru Week 15. Similar to the Richardson-to-Stephen pressure discrepancy, this variance is humongous.

Wilson’s tenure in Minnesota is likely over. He was splashy enough to garner attention leaguewide for this impending free agency. The Vikings are committed to Barr’s long-term contract more so than the trendy money that will flow into Wilson’s pocket. Indeed, Wilson makes noticeable plays. Yet, the aptitude trade-off is evident in his ability to tackle. Betting money should be thrown at the retention of Barr’s services than the less fundamental allure of Eric Wilson.

Kendricks will be back in 2021 healthy and ready to re-anchor the Vikings defense. He is the team’s cardiovascular system.

But after Barr and Kendricks, it’s a guessing game for the final linebacker position. Todd Davis may be retained to start as he has filled in admirably in Barr and Kendrick’s absence. Troy Dye could be groomed to start. Or an affordable free agent might be the solution.

Ultimately, the starting linebacking corps of Wilson-Davis-Dye that played in Week 15 against the Bears will not resemble the 2021 bunch – at all. Book it.

This section of the defense will actually have some continuity. Rookie corners Cameron Dantzler and Jeff Gladney developed tremendously in 2020 via trial-by-fire format. Gladney displayed a knack for tackling whereas Dantzler is the best rookie cornerback in football per PFF. These men are building blocks and appear to be 2021 starters barring unforeseen regression.

Anthony Harris – like Eric Wilson – is on borrowed time in purple clothing. He is too expensive, and he will not play for the Vikings in 2021. The team, per usual, is strapped for cash. Re-upping Harris’ lofty contract demands are emphatically not in the budget – especially for a man that has not registered an interception in 2020. A third-to-fifth round pick will be spent on a young safety, and that man will receiving ample 2021 playing time.

And then there’s the stalwart – Harrison Smith. The Notre Dame alumnus is a Vikings staple, and he will not be exiled this offseason. Why? Because he is still so productive. He is Zimmer’s one sturdy piece in the secondary. For a team seeking a return to defensive supremacy in 2021, the exodus of Harrison Smith is incongruent. He’s not going anywhere.

The secondary will be the only branch of defense that looks relatively similar to the group on the field against the Bears. If that defense made you cringe (it should have), that’s ok. The personnel is about to sustain a transformational rebirth over the next eight months.