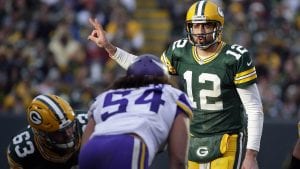 The Green Bay packers had the good fortune to have two Hall of Fame quarterbacks back to back, but are the good times ending? Rogers hasn’t looked like the same guy in the last two years. He really hasn’t looked the same since the Anthony Barr hit put him out for the season a few years ago. There are times in the pocket when he looks like an old fragile man on a stairway who is worried about falling and breaking a hip.

Some say that he hasn’t looked good because he doesn’t have a good supporting cast, but Davante Adams, Jimmy Graham, Aaron Jones and a good O line weren’t exactly terrible.

Aaron Rodgers turns 37 this year and some think his skills are declining. Peter King, Bucky Brooks, Skip Bayless and others have noted the decline, but the real proof is in Green Bay. The Packer organization traded up in the first round to select a quarterback. You don’t do that when you have a Hall of Fame Quarterback, unless you believe he is in decline. Rodgers knows.

He has always said he wants to finish his career in Green Bay, but recently he’s acknowledged that this wish is now out of his control. Time is running out on the Aaron Rodgers led Green Bay Packers.

What does this mean for the Purple? It means the Packer’s door is closing and the Viking’s door is wide open!