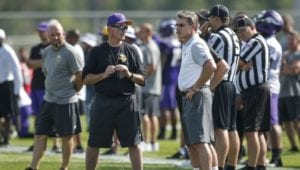 After their season-ending loss to the Super Bowl bound San Francisco 49ers, many things are uncertain for the Minnesota Vikings. A long offseason awaits the purple and gold, but the coaches and front office will be plenty busy as there are many decisions to be made. Let’s take an early look at some of the looming questions and possible answers this offseason.

It’s official, assistant head coach Gary Kubiak has been promoted to offensive coordinator. Given his experience and similar coaching style to head coach Mike Zimmer, it’s no surprise to see him promoted. With Kubiak fully behind the offense, there will likely be even more emphasis on building a sturdy offensive line in the coming months. That leads us into our next two topics:

The most obvious weak spot to me (and many others) on the 2019 Vikings roster was at left guard. Unfortunately, Pat Elflein did not thrive when moved from center to guard, and his struggles in pass protection led to a lot of pressure on Kirk Cousins. That can’t happen again if the Vikings want to make a deeper playoff run, so I expect general manager Rick Spielman to shore up the position soon. The Vikings spent this season developing Dru Samia, but it’s tough to say if they trust him in a starting role next year. I would like to see the team invest a high draft pick in a guard with Samia continuing to learn as a backup.

As things stand, the Vikings are not in dire need of a new left tackle. Veteran Riley Reiff still has two years left on his contract, and he played sufficiently last season. That said, Minnesota is currently strapped for cash, and cutting Reiff would save several million dollars to be used elsewhere. Left tackle is also a critical position on the offensive line, so Kubiak may be interested in investing a high draft pick or significant free agency money in the position. Another option is to develop a younger player already on the roster, such as Aviante Collins or Oli Udoh. Only time will tell, but Reiff could very well become a “cap casualty.”

Low and behold, all of the hype surrounding safety Anthony Harris was real. The former undrafted free agent thrived as the starting safety paired with veteran Harrison Smith this season, and he’s due for a big pay raise and new contract. Whether or not that happens in Minnesota remains to be seen, but it would seem silly to let such a talented home-grown player walk out the door. Harris tied the league-lead in interceptions this year, and he is only beginning to enter the prime of his career. Even with a limited budget, expect the Vikings to spend some serious money on the elite safety very soon.

This may not seem like a high-priority position to everyone, but it is to me. The Vikings special teams unit has seen punter/holder turnover for several years, and it’s about time for that to stop. Bringing in a reliable punter and top-notch holder like Britton Colquitt was a brilliant decision by Rick Spielman, as he worked well with Dan Bailey and brought much needed experience to the locker room. Bailey commented throughout the season how he felt more confident with Colquitt holding his kicks, and the punter also had great rapport with the players and coaches. It shouldn’t cost too much to bring Colquitt back, so let’s hope Spielman is ready to commit.

Whoa whoa whoa. The Vikings don’t need a quarterback, what’s this doing here? Well, although Kirk Cousins is under contract next year for no less than $29.5 million, his future in Minnesota is anything but certain. Much of the fanbase is ready to extend the veteran thanks to his impressive stats this season (and of course his first playoff victory), but many fans are ready to turn to the draft or free agency to breed a new signal caller of the future.

Spielman, Zimmer, and Kubiak’s feelings about this position are somewhat unknown, and draft night 2020 will give fans some clarity. Personally, I would put money on Spielman at least drafting a quarterback, possibly in the middle rounds. That way, he could learn under Cousins, and possibly take the reins when Cousins’ contract expires. Regardless of if they intend this player to be the future starter, the Vikings are also needing a new backup, as Sean Mannion is entering free agency.

Needless to say, this will be an interesting storyline to follow this offseason.