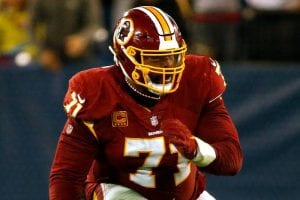 30 NFL teams’ seasons have unfortunately come to an end and 95% of NFL fans have turned their focus to the offseason. The 2020 NFL season kicks off with free agency in just two months and we are just three months from the 2020 NFL Draft. You’re probably already researching players entering free agency and the draft, pondering who may be able to help your respective team prior to the next upcoming NFL season…but don’t forget about the cap casualties.

Yes…those veteran guys that get cut because they aren’t living up to their contracts anymore or those guys that get cut because the franchise is broke and it’s the only move that makes sense moving forward. Below are potential pending cap casualties for each NFL team as we head into the offseason. Don’t be surprised to see these names on the chopping block throughout the next 60 days.

The Cardinals are sitting in a good spot entering free agency. They’ll be looking to upgrade the offensive line and their defense this offseason. Patrick Peterson may be a surprise name that you hear. P2 has been tied to trade rumors for consecutive years now and the Cardinals lose relatively nothing by cutting him.

The Falcons will surely be making some moves this offseason to save some money and ensure they can be competitive in 2020. Keanu Neal is a name to watch here. With an excellent Safety class pending in free agency, the Falcons may cut the former Pro Bowler loose after back-to-back season-ending injuries.

Don’t expect the Ravens to make a lot of moves. One name to watch on this squad is Marshal Yanda. It’s been rumored that teammates believe the All-Pro Guard has been contemplating retirement.

Tyler Kroft isn’t worth $5 million and I doubt the Bills pay Spencer Long that much to be a backup again.

Another team that will be looking to shed some dead weight. A new Head Coach means a new direction and there’s a very good chance that none of the guys above will be back with the Panthers in 2020.

The Bears are a team who aren’t currently in a good spot financially but have the opportunity to make room for improvement quickly. Leonard Floyd is set to be a paid like a premiere pass-rusher heading in 2020. Is he worth that? And is Chicago really going to pay over $5 million for a kick returner? We’ll see what they do.

Andy Dalton has played his final snap in Cincinnati. After being benched, his chances of being a starter in Cincinnati again are about as likely as the Browns winning the Super Bowl next season. Look for the Bengals to be BIG spenders in free agency.

The Browns don’t have many cap casualties. Most of their older players are already pending free agents and the rest are still on rookie contracts. Chris Hubbard was arguably the worst Right Tackle in the league in 2019, so i’d be inclined to believe it’s unlikely he’s back with the team.

With as much talent as they already have, there’s not a better team in the league that’s in better position heading into the offseason than the Cowboys regarding the salary cap. They already have more than enough money to re-sign Dak Prescott and Amari Cooper, plus whatever is left over to try and improve their defense.

Ronald Leary has had a hard time seeing the field since his arrival to Denver three years ago. Don’t be surprised if you don’t see him back for a fourth.

Rick Wagner has not lived up to his contract at this point. Tyrell Crosby and his rookie contract are waiting patiently for Wagner’s departure.

The Packers are in a bit of a pickle. They have some green to work with but it’s not enough to attract top-tier free agents. A guy like Marcedes Lewis could retire, but if not, Jimmy Graham may make sense if they want to add another playmaker on offense. Rookie TE Jace Sternberger will be ready to take the reigns in year #2.

The Texans are in incredible cap positioning. They have the picking of the lot with what they’d like to do. All of the names above can be let go within the next few months and the Texans won’t lose a dime. Vernon Hargreaves is probably the most likely of the group to get the chopping stick.

The Colts lead the league in available cap space heading into the offseason. A Margus Hunt cut isn’t financially based-it’s performance based.

The Jaguars have very little to work with heading into the offseason. Unfortunately, a lot of that is based off of the Nick Foles signing. What they do with him going forward is to be determined, but we almost know for certain that he won’t be cut due to his guaranteed money.

The Chiefs are in a really tough spot as they are set to make Patrick Mahomes the highest paid QB in NFL history this offseason. Locking Mahomes up long-term will be their top priority and locking up free agent DL Chris Jones will be a close second. They don’t have near enough money to do that as of right now.

I’d be surprised if Sammy Watkins is back at a $21 million cap hit next season.

I’m excited to see what Mike Mayock does to improve the LAS VEGAS Raiders this offseason. They’ll be looking to upgrade on both sides of the ball.

The Chargers have some money to play with now that they no longer have to deal with a high Philip Rivers salary. They have a number of needs and they have plenty to work with.

The Los Angeles Rams are one of two teams (Eagles) that are currently in “Salary Cap Hell” right now. I don’t necessarily believe any of the guys above are going to be let go this offseason but if I had to put my money on three players, these would be the ones. The Rams have locked up all of their top talent to long-term deals and a lot of it is guaranteed money. RIP Les Snead.

Half of the Dolphins roster is set to hit free agency and Miami is currently set to have the second-highest salary cap space available of any team in the league heading into free agency. Albert Wilson probably isn’t worth $10+ million now that you’ve paid DeVante Parker and an upgrade at Center is clearly needed.

The Vikings are currently LAST in the league in available salary cap space. It’s not a matter of IF moves are going to happen, it’s WHEN and WHO. Coach Zimmer hinted that he wants to get younger this offseason and all of the players above are going to be at least 30 years old heading into the 2020 season. Don’t be surprised if all four of them are dealt away with as the Vikings try to clear space to re-sign Anthony Harris and extend Dalvin Cook this offseason.

Whether or not Tom Brady returns to New England is yet to be determined. Regardless of who the QB is next season, the Patriots will be looking to add offensive weapons to their arsenal this offseason. Saving money by cutting an aging Mohamed Sanu is a good start.

The Saints are not in a good spot financially right not but a lot of that is predicated off of what Drew Brees is going to do. It’s likely that he’ll be back again in 2020 as he’s yet to show any signs of severe aging. The Saints still have the ability to create some significant space though, even if Brees does return…

Alec Ogletree is severely overpaid. That should be a no-brainer cut for the Giants. They’ll have plenty of money to try and attract some top-tier free agents to the Big Apple this offseason.

The Jets don’t really have any glaring cuts that need to be made but if they’d like to open up some more space to attract free agent that want to be a paid, theses three are a good place to start.

If you scroll up a bit you’ll read that I mentioned earlier there are two teams heading into the offseason that are in “Salary Cap Hell”. The Los Angeles Rams…and the Philadelphia Eagles. The Eagles have done a good job of locking up their top players long-term but that has handicapped them severely, financially. This is the only move I could find that made a little sense. Expect a lot of restructures from the Eagles in the coming months.

The Steelers are next to last (Vikings) in the league in available cap space as of right now. Joe Haden being cut is unlikely, but they may go there if they get desperate enough for some clearance. Expect multiple moves to be made to clear some space.

One of the following Running Backs is not going to be back with the Niners next season…maybe more than one. Coleman and McKinnon seem like the logical options.

The Seahawks are in a really good spot to add talent this offseason. Dumping some age might be the top priority.

The Bucs are currently Quarterback-less heading into the offseason but it sounds like Jameis Winston should be back. Tampa Bay could be a team to watch out for in 2020 if they add some talent on the defensive side of the ball this offseason.

Delanie Walker is aging and can’t stay healthy. It won’t surprise me in the slightest to see the Titans move on from him as the starting Tight End.

Dion Lewis has been a disappointment since leaving New England. He’s not worth $5+ million as a back that only plays a few handful of snaps each week.

This is a great team to finish up the article with cause they are going to dump some serious dead-weight in the next 60 days.