Doubling the Cap: Two Easy Moves Would Save the Vikings Over Ten Million Dollars 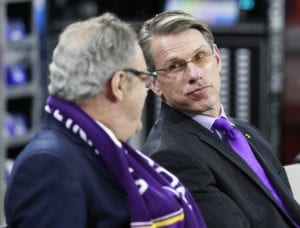 With the signing of Kirk Cousins to a monster deal last year, and the extension of several key players, the Vikings enter the 2019 season with limited cap maneuverability. Minnesota currently only has $10.985 million to spend on players this offseason, which includes: players who need to be re-signed, any free agents joining the team, and the Vikings draft picks in 2019. Ahead of only the Jaguars and the Eagles in terms of money available to spend, the Vikings will have limited resources to make their team better. However, after finishing the season with a 8-7-1 record, General Manager Rick Spielman will look to do whatever he can to bring his team back to the playoffs. Reaching the postseason necessitates two roster changes that would nearly double the cap space the Vikings have to make improvements or retain players on expiring contracts.

With no guaranteed money on his contract heading into 2019, it looks very likely that Andrew Sendejo will be cut this offseason. Pro Football Focus (PFF), which grades every player on every snap, graded Sendejo at an overall grade of 69.7 – equating to the 65th safety in the league. Sure, Sendejo only started five games for the Vikings due to an early-season injury. But, his replacement emerged during the time he could not play. Safety Anthony Harris, who started the season as a backup, performed much better this season than Sendejo did when healthy. According to PFF, Harris was the 6th best Safety in the league, grading at 89.0 overall. Nicknamed “Ant Man” by fans, Harris made his presence known in his first game played as a starter this season in Week 6. Against the Arizona Cardinals, he picked off Quarterback Josh Rosen towards the end of the third quarter.

On this play, Harris (41) demonstrates his playmaking ability and his compatibility with the Vikings Defense. He correctly reads the Quarterback, sticks to his defensive assignment, and jumps the route to get an interception. This turnover would give Minnesota’s offense the ball at midfield. Furthermore, it shows how well he works with his safety counterpart, All-Pro Harrison Smith. In the same play, Smith (22) lines up as an edge rusher across from Arizona’s Right Tackle. But, prior to the snap he backs off into the center of the field – where he positions himself as the safety in a Cover-One coverage. At the same time, Harris shifts over to cover his Wide Receiver, Larry Fitzgerald (11). Effectively, the defense is disguising its coverage, leading Rosen (3) to believe that Harris is covering the single zone in the middle of the field. In reality Smith is covering that zone, leaving Harris to cover Fitzgerald – but Rosen does not see this coverage and throws to Fitzgerald, believing he has an open man. Watch Rosen’s eyes here as he looks to his left immediately after the snap of the ball, hoping to throw to Fitzgerald.

He does not see Harris until it is too late. Harris makes the pick, sure, but his place in this interdependent defense is just as important to Head Coach Mike Zimmer. He doesn’t just play hard, he plays smart. His successful transition into the defense proved that he should retain the starting job in 2019. Indeed, Harris kept the starting job even after Sendejo had returned from injury.

So, with Sendejo’s 2019 replacement already on the roster, the Vikings could free up the entirety of his $5.5 million contract to spend elsewhere. In the process, Harrison Smith and Anthony Harris go into the new season as one of the NFL’s best duos at safety.

After spending his career as a Tackle, the Vikings attempted to shift Mike Remmers to Right Guard. This move was likely done out of desperation from last offseason. Remmers succeeded Right Guard Joe Berger, who started all 16 games for the Vikings in 2017 but retired after that season. Following the Draft, where the Vikings selected Offensive Tackle Brian O’Neill, the team decided to change Remmers’ position on the line. An injury to starting Guard Nick Easton also facilitated this preseason adjustment, meaning Remmers would be starting alongside Tom Compton, instead of competing with him for the same job. This experiment did not go well. Per PFF, Remmers played over a thousand snaps at Right Guard this season, and graded as the 67th Guard in the League. For reference, there are 64 Starting Guards in the NFL (32 at both the Left and Right position). Remmers’ poor performance at the position, with an overall PFF Grade of 58.9, is part of the reason the Vikings’ offensive line was a weak link on the team in 2018.

Cutting Remmers would incur a $1.8m dead money hit. In essence, a dead money hit is money that had been guaranteed to Remmers in his contract, meaning the Vikings would have to pay him this amount even if he wasn’t playing for the team. So, by cutting him, the Vikings would not be able to use the full amount of his contract to sign other players this offseason. Still, cutting Remmers would net the team a total of $4.55 million in savings, which not an insignificant sum. This total comes from the amount that Remmers would be paid if he played, but this money is not guaranteed if he is cut or traded.

Another problem with cutting Remmers is that there is no obvious replacement on the team. Whereas Sendejo could be replaced with Harris, who is arguably better for the team, Remmers would likely be replaced by Danny Isidora, who is arguably worse. Still, there is plenty of offseason left to find a potential replacement. The Vikings could use some of their limited cap money to pursue a Guard in Free Agency, or use their picks to select one in the 2018 Draft. Wisconsin’s Beau Benzschawel, PFF’s top rated Guard in this years draft, should be available in the latter half of the first round if the Vikings are interested. North Carolina State’s Terronne Prescod could also be an option, and is projected to be a second round pick.

Given this season’s performance on the Offensive Line, I suspect the Vikings will be looking to upgrade at Guard regardless of Remmers’ playing status. Cutting him will give the team cash to find his replacement in Free Agency, or allow them to spend on other holes, making it easier to spend high-round draft picks on a newer, younger, and hopefully better Right Guard. This move is likely to happen.

Following through with these cuts would secure the Vikings approximately $10 million to use going into the offseason. A total of about $20 million in cap space is still a low amount, compared to the rest of the league. Still, The Vikings will need all the cash they can get to retain their players or find new ones. Expect more drastic cuts than just these two to shake the Vikings roster, surely. Still, getting rid of Andrew Sendejo and Mike Remmers is a great start, and look for Vikings’ management to do just that.