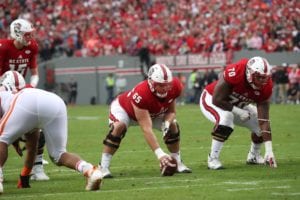 After weeks, months and, for some, years, of hoping the Vikings would take an offensive lineman in the first round of the NFL draft, they did exactly that. “With the 18 pick of the first round in the 2019 NFL Draft, the Minnesota Vikings select[ed], Garrett Bradbury,” according to NFL Commissioner Roger Goodell.

And there was much rejoicing in Minnesota-ville. With most of the fan base, anyway.

The Vikings needed an offensive lineman; the fans wanted them to select one whom could they could plug and play; and in Bradbury they have gotten one.

“We’re very excited about our first-round pick; we’ve been monitoring him since last year,” general manager Rick Spielman said. “Once we found out what kind of offensive scheme we’re going to run a lot of this outside zone and zone scheme, Garrett was the perfect fit for what we were looking for. As we went through the draft meetings over the last two or three weeks, along [with] listening to the coaches and listening to the traits they they’re looking for, this was one of the guys we had targeted.”

The Vikings had some choices when it came to pick No. 18—lots of them—but they were able to put aside the head coach’s penchant for drafting defenders (and his love for taking cornerbacks—he joked he was hoping to get one), they ignored the noise about getting another wide receiver, eschewed the recent need for a three-technique, did not knuckle under to the rumors of trading up and finally selected an offensive lineman (Spielman said they took a couple calls). The draft board fell right for them with a lot of defenders going early, and the Vikings got their man.

“We’ve been through a hundred scenarios leading up to tonight and there were a couple guys that we looked at,” Spielman said. “But Bradbury was, by far, our target tonight when we got into the draft.”

So, after all the speculation, what does Bradbury bring? In some circles, Bradbury was one of the most athletic offensive linemen in the draft. Andre Dillard was still on the board, and so was Jawaan Taylor and tackle Cody Ford, but the Vikings coaching staff had their eye all along on Bradbury.

“Gary Kubiak had the opportunity to all fall basically evaluate a lot of college football players, and this was one of his favorite guys and with the offensive group,” head coach Mike Zimmer said. “And I was sitting in my office one day, and Andre Patterson was watching all the defensive linemen, and there are a lot great defensive linemen in this draft, and he came in and said, who’s this center from NC State. He’s a really good football. That even intrigued me more because of the way he was playing against these top-level defensive linemen in the ACC.”

Bradbury checks a lot of boxes for Zimmer: “[He’s] very athletic, very smart, very tough, he’s got great balance so we are excited to have him. He’s smart and tough and a great competitor.” More importantly, Bradbury has position flexibility. He comes in with tight end experience in high school (just like his new teammates Riley Reiff and Brian O’Neill), played some defensive line, and then played guard his first two seasons in at NC State and then switched to center for his final two yeas, winning first-team All-ACC honors.

The question becomes, where will he line up come next season? While Zimmer wouldn’t commit to anything until he sees his line line up this spring and summer, for Bradbury, it’s all about playing football. He rarely comes off the field and that is why he switched to offensive line.

For the oft-injured O-line in Minnesota, that is pretty good news. For Zimmer and his running back Dalvin Cook, there is more upside to Bradbury.

“I think that will be a strength of his,” Zimmer said of Bradbury in the running game. “The big thing with these athletic guys, if you get them moving sideways, and you can get one guy cut out of a gap, then this one cut, downhill run game should be really good for Dalvin.”

In the end, the Vikings identified their player and were able to get them. With a couple picks in the next two rounds on Friday, does that free Zimmer up to get back to work on his defense? Not so fast.

“I think it’s going to work out fine,” Zimmer said when asked how he feels about his offensive line right now. “We could do some more things as we get going, so we’ll just see how it all ends up.”