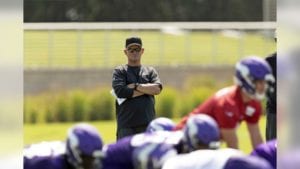 Training camp has just begun, and these next two weeks will make or break many Minnesota Vikings careers. Three players in particular are vying for thee valuable roster spots, but there’s no guarantee they’ll make the team. With limited time to prove themselves, who will earn a gig with the purple and gold?

Saying that Treadwell has a lot to prove during training camp would be an understatement. He’s still chasing the third wide receiver spot, but his “prove it” season already passed and there are rookies nipping at his heels. Most of his money this year is guaranteed, but releasing him would free up a little bit of cap space and open a roster spot. That said, cutting a first round pick marks failure for GM Rick Spielman, and he may treat Treadwell like Cordarelle Patterson. Cordarelle was another botched first-rounder, but Spielman kept him around until his contract expired. Treadwell did train with Kirk Cousins during the offseason… perhaps they found some new chemistry. At the end of the day, everyone wants Treadwell to succeed.

Some Vikings fans may not even know of offensive lineman Aviante Collins, but it’s time to pay attention. The backup guard and tackle received rave reviews from the late Tony Sparano last year, but he was quickly sidelined with an arm injury. Collins can play multiple positions on the line, which is valuable in the injury-plagued NFL. If he has a good camp, he might be able to steal the backup job from veteran Rashod Hill. At the end of the day, Aviante’s fate likely rides on new offensive line coach Rick Dennison.

Brothers is another name that Vikings fans may not be familiar with. Minnesota already has an excellent linebacker duo with Eric Kendricks playing in the middle, and Anthony Barr at strongside, so Brothers rarely sees the field. After the Vikings drafted him in 2016, the fifth rounder has mainly played on special teams. Special teams is a great place to start, but he hasn’t taken the next step and is heading into a contract year. With young linebackers like Devante Downs and Cam Smith in camp, Brothers has a lot to prove in the coming weeks. Hopefully this will be the year of the Brothers breakthrough.

Which of these three do you think will make the roster? Leave your comments below!