No Matter How Good You Think Harrison Smith Is, He’s Better Than You Think He Is

Harrison Smith was the highest-graded player in football in 2017.

But maybe you don’t put much stock into PFF grades. Fair enough — then consider this next point:

Harrison Smith had a passer rating allowed of just 22.0 this season, the lowest mark from any safety OR cornerback in 2017.

Smith didn’t give up a touchdown in coverage all season, and he had five interceptions and 17 pass deflections. Smith was targeted 42 times on the season, giving up just 23 receptions for 140 yards. For comparison, Earl Thomas gave up more yards (160) on less than half the amount of targets. Smith’s 0.25 yards allowed per coverage snap is among the lowest of any player at any position in the NFL, and his passer rating allowed is absolutely unprecedented.

But Harrison Smith is so much more than an elite coverage safety:

Harrison Smith had 17 run stops this season, and had a run stop percentage of 7.4% when playing in the box–good for top ten among all safeties. Smith sets the edge in run defense like he’s Khalil Mack:

He makes every tackle. Smith had just two missed tackles in the run game all year–more than three times less than other elite run defending safeties like Reshad Jones, Landon Collins or Keanu Neal.

As a pass rusher, Harrison Smith is one of six defensive backs in the entire NFL to have a total number of sacks, hits and hurries in the double digits. He blitzes with an insane level of burst and bend for a defensive back:

No defensive back was as productive on as few snaps as Smith. Tyrann Mathieu, one of the best pass-rushing defensive backs in football, had one sack, one hit, and ten hurries on the season over 55 pass rushing snaps. Harrison Smith was more effective as a pass rusher, with two sacks, one hit, and seven hurries on the season on literally half as many pass rushing snaps.

Which underscores just how versatile Harrison Smith is:

Harrison Smith is arguably the most versatile defender in the football

Here is a chart covering just how many positions Harrison Smith plays on defense: 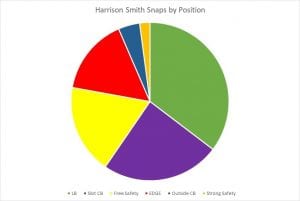 Smith plays a lot of man coverage, especially for a safety. And he’s equally as good in zone as he is in man.

Man or zone, Cover-1 or Cover-6, edge rusher or outside cornerback, Harrison Smith can truly do it all. And he’s the only player that does it all at an elite level. He’s a more productive pass rusher than Tyrann Mathieu, a better coverage defender than Earl Thomas, and a better run defender than Landon Collins.

Harrison Smith’s versatility allows him to be arguably the best pre-snap defensive player in football.

Mike Zimmer recently said that when he first arrived in Minnesota, Harrison Smith knew how to play safety. But now he knows every position on the defense–not just because he plays them, but because he tells everyone else how to play them as well.

As soon as Smith sees the man in motion in this play, Smith runs over to the slot cornerback, Mackenzie Alexander, to let him know that (based on the revised pass protection and pass rush) he’ll have a free lane to the QB and that he should blitz. Smith hops back into coverage on the other side of the field, and Alexander gets immediate pressure on the QB. This goes down on the stat sheet as a pressure from Alexander, but it’s Harrison Smith that made it happen.

Harrison Smith knows where the ball is going based on the pre-snap look. He knows there’s a crossing route, so he lurks in coverage underneath until Hundley targets Nelson. Smith makes a diving, one-handed interception, all because he knew where the ball was going before even the offense did.

As soon as the man is put in motion, Smith recognizes the look and comes crashing down pre-snap, eluding a blocker and making the stop.

So not only is Smith the Vikings’ pre-snap field general, he’s also a quarterback mind reader. Good quarterbacks know not to throw the ball at a shutdown cornerback or ballhawking safety. The only problem is that with Smith, they can never tell where he’s going to be.

They’d avoid him if they could, but they can’t.

That leads me to my last point:

Von Miller, Aaron Donald, Jalen Ramsey and Luke Kuechly are all absolutely elite players. If one of them goes down, their team is significantly worse off. And yet, there are backups who can still play their position if they go down.

There is no backup who can play Harrison Smith’s position.

No one else can play man coverage in the slot, blitz off the edge and play single-high coverage, each on the same playcall depending on the pre-snap look.

Harrison Smith missed two games for the Vikings last year. Before he went down, they were averaging 17.4 points allowed per game–second best in the NFL. When Smith went down, that shot up to 25 points per game–good for 8th worst in the NFL on the season.

Harrison Smith played all 16 games this season, and directly as a result, the 2017 Minnesota Vikings lead the league in points allowed and yards allowed, and they have the best third down defense in NFL history. None of that is remotely possible without Harrison Smith.

No matter how good you think Harrison Smith is, he’s better than you think he is.