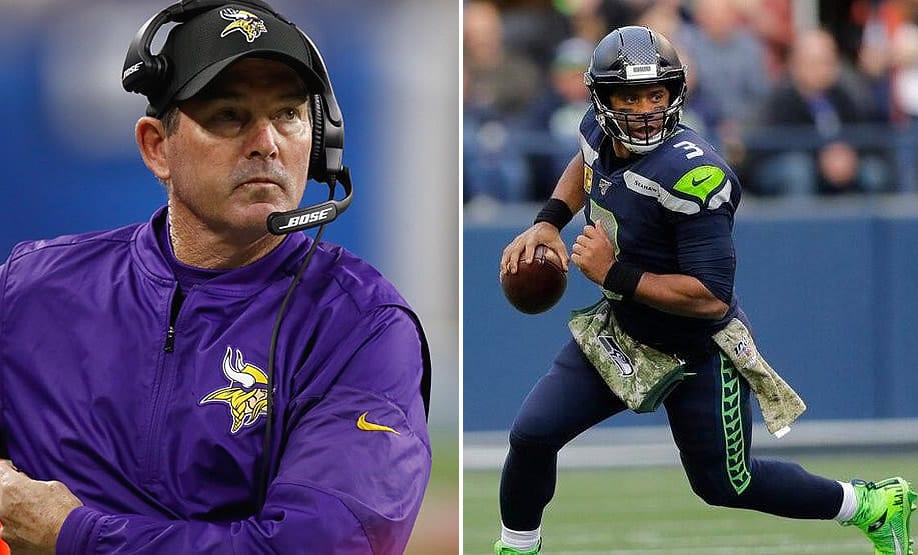 With two losses to Wilson and the Seahawks in 2015 and another one last year, Mike Zimmer and the Minnesota Vikings are headed to Seattle with the big idea of breaking that losing streak and keeping pace with the NFC’s top teams in the 2019 playoff race.

It will take even more time for Vikings fans to forget Blair Walsh‘s infamous shank from 27 yards out in a playoff game in frozen TCF Bank Stadium in January of 2016 against Seattle.

Hall-of Fame Vikings head coach Bud Grant, then 89 years old, trotted out to the middle field in only his short sleeves with the Minnesota team captains to start the game against the reigning NFC Champions and Super Bowl winners of 2013.

The Viking faithful huddled together and watched their beloved team battle tooth-and-nail through the icebound afternoon of a defense-dominated contest only to witness the ball come off Walsh’s foot awkwardly in the final seconds of it, ending the game cruelly and anticlimactically, 10-9.

What some people forget is that unkind loss was but one of their losses to the Seattle Seahawks that 2015 season. A mere five weeks earlier, the Seahawks had come to Minnesota and absolutely dominated the Vikings to the tune of 38-7.

Not A Pretty First Contest

At home in their temporary stadium at the University Of Minnesota, the Vikings’ offense was held to 125 total yards by Seattle’s ‘Legion of Boom’, gave up four sacks and converted only 2 out of 10 third-down conversions.

In a game that was 35-0 at the end of the third quarter, Russell Wilson was 21/27 for 274 yards and three touchdowns, ending the game with a 146.0 QB rating. He also rushed for 51 more for an offense that finished with 433 total yards against what was the league’s 5th-ranked defense who were missing three key players in Linval Joseph, Anthony Barr, and Harrison Smith.

Still, a 38-7 raises some serious questions. Zimmer suggested after the game that the Vikings had a poor effort during the week in practice. Vikings’ running back Adrian Peterson, who had a mere 18 yards on eight rushing attempts said simply:

“I felt like we were out of sync. Definitely give credit to Seattle; they did a good job of coming in and forcing us to do things differently. They were just the better team. They were more aggressive, more physical, and they outcoached us as well.”

The “outcoaching” meant Peterson was unhappy with his workload. Regardless, the loss was egregious and left fans wondering what the state of morale was on the team.

If Mike Zimmer was indeed “outcoached” in the Week 13 game, he was determined to not let it happen again when the Seahawks met the Vikings back at TCF Bank Stadium for the Wildcard Playoff just over a month later.

The Vikings, big home underdogs after that 38-7 loss to Seattle in December, took to the field resolved to change the outcome of this rematch. The set-up was perfect; a true homage to old Met Stadium and the Minnesota Vikings of old.

A Different Kind Of Vikings D

Though the Vikings offense ran straight back into the ‘Boom’ in the legion of the same name, their defense had been reinforced by one tenacious head coach who refused to be embarrassed in front of the home crowd again.

The Vikings held Wilson to 13-26 passing and a 63.3 QB rating. They sacked the Seahawks leader numerous times, with defensive end Everson Griffen spearheading the charge.

In a drive that ate up the last two minutes of the playoff game, Vikings’ QB Teddy Bridgewater led the Minnesota offense down to the Seattle nine-yard line to attempt a 27-yard field goal that would have won the game, 12-10.

In December of last year, Zimmer and the Vikings, flailing offensively with a 6-5-1 record, journeyed to Seattle to take on a 7-5 team now four years removed from their appearance in the Super Bowl.

In what would be the last game of the Vikings’ beleaguered offensive coordinator John DeFilippo, the Vikings once again generated little offense against the Seahawks defense now bereft of their famous ‘Legion’.

Caught under pressure throughout the game, Minnesota would fall behind 21-0 and not score until there was just over a minute in the game.

Although Zimmer’s defense would keep Wilson under wraps in the game, (allowing only 72 yards passing and a 37.9 QB rating), their ineptitude on the other side of the ball once again left the Viking coach with a loss and a lousy attitude. He fired Defilippo and put quarterback coach Kevin Stefanski in his place.

Mike Zimmer has often said he has trouble sleeping before big games. The coming Monday night matchup between his Vikings and the Seahawks must have him pacing the floor this weekend.

Zimmer is well aware of his situation as the head coach of a team in the thick of a fight to win the NFC North again. He also is aware that the Green Bay Packers have a softball schedule in the regular season’s last month.

The Vikings either win in Seattle, in Detroit, and in Los Angeles against the Chargers before facing the Packers in Week 16 or this head coach will find himself having to hope for things out of his control.

He’ll also find himself personally 0-4 against one singular athlete he now has had over two weeks to plan defeating. 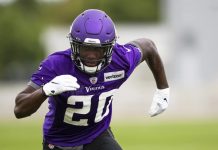