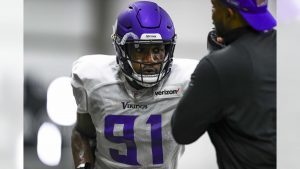 Defensive end Yannick Ngakoue made his much-anticipated Vikings debut this past Sunday just two weeks after Minnesota swung a late-offseason trade for him with the Jacksonville Jaguars.

It was a disappointing start for Ngakoue, who registered only one hit on Aaron Rodgers in a 43-34 season-opening defeat at the hands of their NFC North rivals, the Green Bay Packers. On Wednesday afternoon, he told reporters that wouldn’t use his lack of time adjusting to a new defense as justification for his poor production.

“You had guys who were at camp for four weeks, five weeks, whatever you may have it, and I just had four or five days to try and get ready. I’m the type of person that doesn’t make excuses, so at the same time it doesn’t matter if I only had one practice. I should be able to do more than I did and that’s how I feel.”

Ngakoue featured early and often for a Vikings defensive unit that didn’t record a sack against Rodgers for the first time since October 24, 2010, nearly ten years. Minnesota was without their star pass-rusher Danielle Hunter, who hit the injured reserve last week with a neck injury.

Hunter has led the Purple and Gold in each of the past two seasons with 14.5 sacks, but his presence was sorely missed on Sunday as he sat out his first game since Week 3 of 2015. Ngakoue and promising third-year edge-rusher Ifeadi Odenigbo weren’t able to generate much pressure on Rodgers, who torched the Vikes for 364 yards and four touchdowns.

Luckily for Ngakoue, he’ll be facing a familiar foe this upcoming Sunday when the Vikings travel to Indianapolis to play the Colts. In eight career matchups versus his former AFC South rival, the fifth-year pro has 6.5 sacks, 3 forced fumbles and an interception.

For his part, Ngakoue is already putting the Packers game in the rearview mirror. “I’m looking ahead of me and what’s ahead of me is Indianapolis.” The key for Ngakoue is replicating the energy that he’s carried into each the previous encounters. “Just gotta bring that same intensity that I brought these last four years into this game.”

It’s a vital game for both the Vikings and the Colts as the loser will fall to 0-2 on the young season, a difficult hole to climb out. With Ngakoue motivated to repeat his previous performances against Indianapolis, the defense should be worth watching against Phillip Rivers in his second game under center.