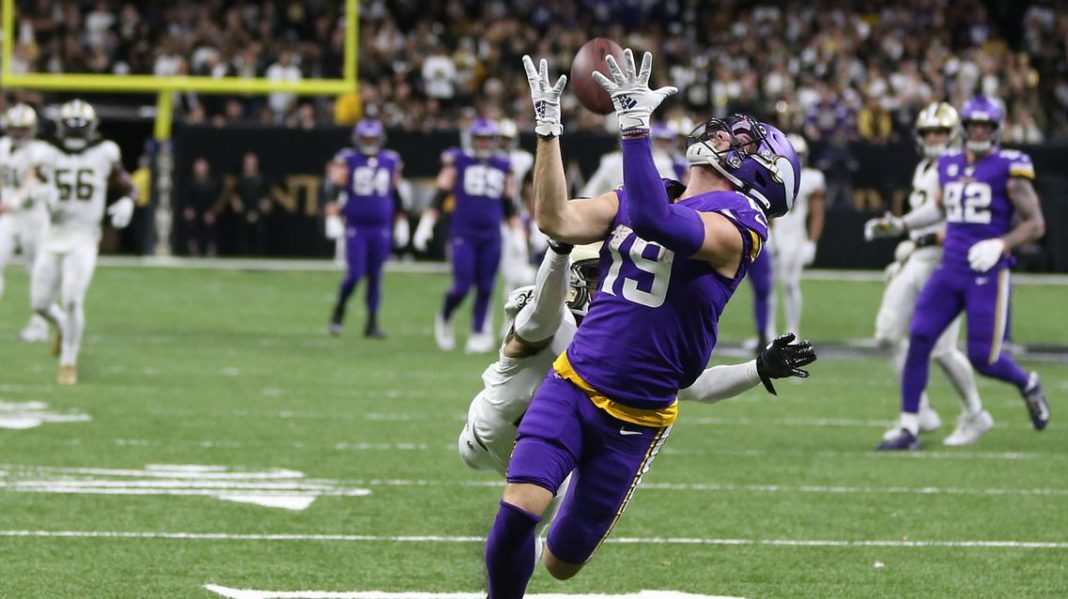 I’ve seen a lot of doom and gloom thoughts since the Minnesota Vikings traded Stefon Diggs a couple weeks ago.Among my favorites are “nobody fears the Vikings offense” and “now the Vikings have nobody to catch passes from Kirk Cousins.”

Nobody needs to fear the Vikings offense. The game of football isn’t played on paper or in our minds. If it was, we would be able to build the perfect roster easily. Very rarely is a team scary enough to throw the other team off, and usually it’s teams defenses that gain a mental edge.

To the second point, the Vikings still have some great pass catchers. Adam Thielen is still a top 15 wide receiver in the NFL, and has often been more productive than Diggs. I give points to the people who say “if people don’t need to cover anybody else, Thielen won’t be able to get open.” You aren’t wrong, but I think you’re overestimating the Stefon Diggs effect.

In 8 career games where both Thielen and Diggs were on the roster, but Diggs didn’t play at all, Thielen averaged 5.375 targets, 3.75 receptions, 48.875 yards, and .375 touchdowns per game. Compare that to 66 games where both were on the roster and both played, Thielen averages 6.2 targets, 4.3 receptions, 57.37 yards, and .31 touchdowns per game. So, Thielen’s stats are slightly better in regard to targets, receptions, and yards, but he scores touchdowns at a higher rate without Diggs on the field.

Now numbers don’t mean everything, and I would call myself an idiot if I didn’t think Diggs makes Thielen better. He does, but the difference isn’t significant enough to say that Thielen will not still be able to be effective. That’s all without accounting for Kyle Rudolph, Irv Smith Jr, and Dalvin Cook.

The Vikings don’t have the pro-bowl tandem that they’ve had over the past ~4 years. This has prompted a ton of fans to say that the Vikings need to draft a wide receiver in the first round of the 2020 NFL Draft, or even that they need to move up to get one of the top receiver prospects in the draft.

I’m one of the draft guys so I’ll give a quick rundown of who they would probably have to trade up to get.

Crazy good hands and route running, with a slightly slower top end speed but still plenty of get up and go. In my opinion, the m\ost polished and complete of the draft class.

Great twitch quickness and probably the best route runner in the class. Concentration drops occasionally, but still likely going in the top 15.

Another Crimson Tide product. Ran the fastest 40-yard-dash of anybody at the 2020 NFL Scouting Combine. An absolute burner who has the classic deep threat traits of straight line speed but a reluctance to get physical.

I was in a conversation with a colleague where they suggested the team move one of their firsts, a third, and a fifth to specifically land Lamb. I disagreed for a couple reasons.

First, I don’t think the Vikings necessarily need to move up to land one of the top guys. The draft is always a strange thing and unexpected runs happen and guys fall and rise completely unexpectedly. So, it’s possible that no receiver gets picked in the first 15 picks and one of the guys I listed falls to 22 or even 25. It’s happened before and it’ll happen again.

Second, the prospects that are farther down on the board are still incredibly solid.

There’s a group of about six prospects that could last to the Vikings pick in the second, depending on what runs are happening, that also have a chance of going in the first. That’s crazy depth and I think it’s likely that the Vikings can wait until the second to address this need.

Even if they don’t address the need in the second, all hope is not lost. Minnesota’s Tyler Johnson should be available in the third along with Michigan’s Donovan Peoples-Jones and Ohio State’s KJ Hill. Just to name three Big Ten products that would be solid options. Then they can always nab a guy with an elite skill like SMU’s James Proche on day three.

Last, I think the Vikings have bigger needs that have a thinner class in this draft. They need to address the left side of the line, they have nobody on the interior defensive line that isn’t better than a placeholder, and the secondary is full of depth players and special teamers. Of course, I would be excited about a new toy for Cousins and a big threat guy, but it would feel too similar to the team trying to replace Randy Moss with Troy Williamson. Not that Stefon Diggs is Randy Moss, but the team should consider other needs and best players available instead of moving up to fill a need that isn’t the largest one on the roster.