Why Brian Asamoah Over Nakobe Dean? 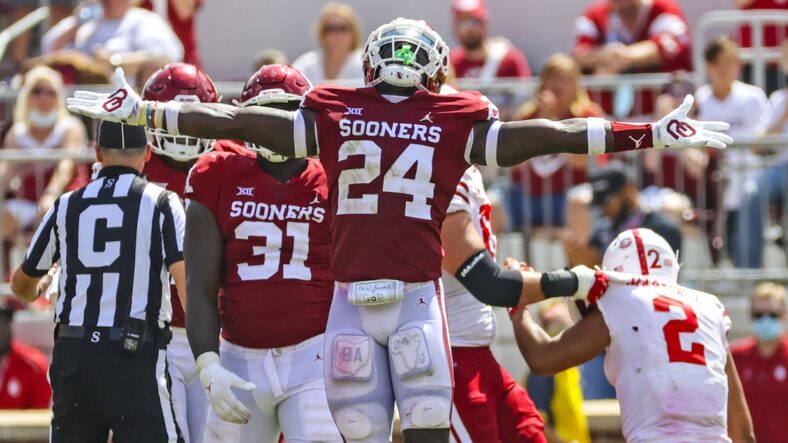 When the 2022 NFL Draft process began this January, many people, including myself, viewed Nakobe Dean as a potential top-10 pick. By the time the draft actually took place though, Dean’s ultimate tumble into the third round was not a complete shock. Meanwhile, Brian Asamoah is a player that consistently came up as one of the draft “sleepers” that could end up being a selection on the second day of the event. These two timelines were on a collision course as the Minnesota Vikings went on the clock with the 66th overall pick.

Both players remained on the clock, and the Vikings were going to have to choose whether they wanted the Bulldog or the Sooner with the pick that they obtained in their trade with the Detroit Lions. They ultimately landed on the Sooner, but what played into that decision?

If there’s one thing that the Oklahoma Sooners have done well over the past couple of years (because it certainly hasn’t been developing top-tier QBs), it’s been their ability to find athletic, rangy linebackers. In the 2022 draft alone, they had both Asamoah and Nik Bonnito get selected just three picks apart. Bonnito went with the final selection of the second round to the Denver Broncos at No. 64 while Asamoah went at 66 to Minnesota.

The Minnesota Vikings had a multitude of needs in the back two levels of their defense. Given that Kwesi Adofo-Mensah selected athletic and versatile defensive backs in the first two rounds, it seems natural that Asamoah’s sideline-to-sideline ability would have been highly touted in the Vikings war room.

On top of range as a run-stopper, Asamoah is no slouch in terms of his ability to drop back and cover passes. In fact, this was one of Oklahoma’s favorite uses for him. He’d press the line of scrimmage before sprinting back into coverage to impact a pass. This play beautifully showcases that ability.

Asamoah may need to polish a few things up, but there is nothing that he flat-out can’t do on a football field. If he had been playing on a national championship team that had multiple first-rounders on it, I would suspect he would be getting much of the same hype that Dean got ahead of the draft. On top of that, Dean’s shoulder injury, which he declined surgery on, scared a multitude of teams off of him as the draft approached.

The Purple Elephant in the Room

Perhaps you’re wondering why the Vikings opted to select a linebacker in the third round rather than, say, a wide receiver or even Malik Willis. It’s certainly not as flashy a pick, but the simple matter of the situation is that these were not immediate positions of need. Linebacker, on the other hand, was and that led Minnesota to Brian Asamoah.

Vikings fans likely won’t want to hear this, but Eric Kendricks is approaching the end of his prime. We’re not 2-3 years down the road folks; it’s already happening. 2021 was the least productive year of his career, and I would be shocked if this trend downward doesn’t continue in 2022.

The stats regarding the LB position and player age are quite damning. Jordan Hicks is also on the wrong side of 30, and while he hasn’t missed a game in three years, his end is likely approaching as well. Because of that, the Vikings need an immediate producer as well as someone who can produce into the future. It’s not impossible that the Vikings need a linebacker to start at least a month’s worth of games this season, and Asamoah is a guy that can jump in and do just that.