Home Minnesota Vikings Opinion Analysis What Can We Expect From Datone Jones? 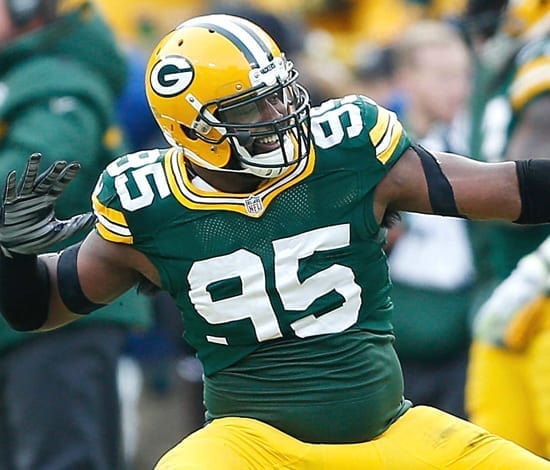 On March 14, the Vikings signed Datone Jones from the Green Bay Packers. The move was lost in a sea of discussion about other acquisition, most notably tackles Riley Reiff and Mike Remmers, but the reaction was a bit strange when present. Vikings fans almost universally praised the selection. Mostly because the contract was 1 year, $3.75 million, which is a solid deal for a pass rusher who will contend for significant snaps. Pass rushers are expensive.  So even if Jones flames out, not much will be lost, and the position got even deeper with the addition of rookie Jaleel Johnson. But in Green Bay, Jones wasn’t quite as loved. A quick look at the Packers’ subreddit during a game thread does not show favorable feelings toward the DE-OLB convert. Packers medies seems annoyed by his penalties, some worse than others, and general lack of production. Free agency tends to have this effect. A team signs a player, and that player is generally overrated by fans excited to play with a new toy. The player’s former team will underrate him, due perhaps to sour grapes, but also because players generally leave teams for a reason. The division rivalry only exacerbates this.

So let’s cut out all the noise, and find out what exactly Datone Jones is made of. His story in Green Bay was a weird one as far as 1st round picks go. Coming out of UCLA, Jones was a highly touted prospect and a 1st rounder with nothing more than a few technique issues to iron out. He was called “position versatile”, which is an odd trait that we’ll talk more about later. Sure enough, the Packers selected him with the 26th selection (immediately after Xavier Rhodes). In his rookie season, he struggled with an ankle sprain, but showed some promise in a limited season. In 2014, his play time didn’t significantly improve, and his sack total was disappointing – only notching 5 over his first 29 games, and pressure on only 8.9% of his snaps (for context, the league leader was 19.4% – via PFF). He was running out of excuses in the eyes of many Packer fans. He was suspended for the 2015 season opener, which only fed the fire. But after the suspension, Jones exploded. He disrupted the quarterback on 12.8% of his plays, but he wasn’t exactly elite at closing the deal, only notching three more sacks. Any coach will tell you this isn’t a huge problem, after all, pressure is 90% of the play, the last 10% is gravy. Further, Jones was still a rotational player in Capers’ scheme despite his remarkable efficiency. He didn’t crack 40% of the team’s defensive snaps in any of his first three seasons.

All this culminated in some pretty bad press for Datone Jones leading up to 2016. His fifth-year option was declined, a common death sentence for former first-round picks. In 2015, the Packers had him move out to OLB on occasion to try to get him more involved, and they committed fully to that in 2016. Position roles are a strange beast. It’s less of a list of categories (DE, DT, LB, etc like you’d see in Madden or fantasy leagues) and more of a spectrum. The bigger you are, the further inside you play, until you get smaller (and therefore faster) and can play linebacker, inside then outside, and eventually defensive back. Jones rushed the interior a lot in Green Bay, so he had to drop weight to play linebacker. Fat isn’t necessarily a bad thing on interior linemen, it just serves as weight to throw around. But linebackers can’t afford to be so encumbered. This meant losing a lot of weight, changing his diet and conditioning regime.

So 2016 starts with Jones, in a new position, with a new body composition, playing for his career in Green Bay. Oh, and a new baby. Despite all that, he put up pressure on 11.5% of his snaps, though he got even worse at converting them to sacks. Couple that with a fewer tackles than you’d like and a lack of splash plays despite a bigger role (57% of snaps), being picked on in coverage (thrown at 19% of the time he dropped back, good for 10th in the league among linebackers) and Jones was in for more bad press. A frustrated Packers media saw a bad team being led by transcendent Aaron Rodgers play and found blame in Jones for not taking better advantage of their HOF-bound quarterback. Sure enough, he was allowed to walk in free agency and signed a cheap, prove-it deal with the Vikings.

The Packers’ community, by all accounts, has labeled Datone Jones as a bust. A broken player who can’t finish a sack, gets too many penalties, and was largely picked on in coverage. But Jones does one thing very well- he gets pressure. It’s ok to be annoyed that he struggles to finish off QBs before they fire off a checkdown, but pressure has immense value. Further, as a likely 3-tech and member of the rotation between Tom Johnson and Jaleel Johnson, Jones won’t have to contend with tight ends very often (though throwing him back there every once in a while as a weird stunt can’t hurt too much and is a good wrinkle).

Jones may be in trouble gaining the weight back, unless he gains it back in fat. If he can do that, he’ll have to work on the penalties, logging 11 for 108 yards in his last two seasons. Ideally, he’d be able to get the quarterback down more, but that’s not as important to the team as it is to his public perception. There’s risk to Jones, which is why he was only worth a 1-year, $3.75 million contract. Hopefully he can be a productive member of the rotation along with Jaleel Johnson (13% pressure in 2016) and Tom Johnson (10.3%).

Datone Jones has been a victim of bad press through most of his NFL career, mostly due to uninspiring stats, penalties and some key headlines, such as fines and suspensions. He’s earned some of it, but his potential is greater than Packers media would lead you to believe. If the Vikings needed him to be the automatic starting 3-tech, we’d be right to be worried about these things, but as a rotational player, we can expect Jones to be serviceable in the run game and extremely disruptive in the pass game, as well as provide an ability to stunt and twist outside with agility. For $3.75 million, that’s a positive value contribution.