Week 11 Players of the Game: Green Bay at Minnesota 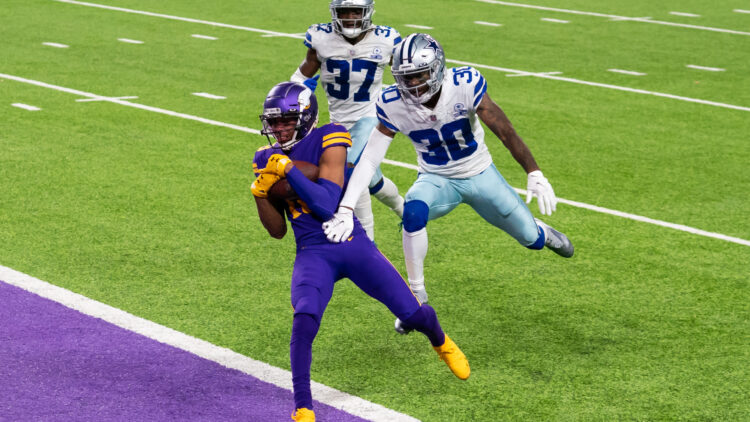 It was a huge win for the Vikings this week against the old foe from Green Bay. This was a Thor-like effort from the Minnesota offense to keep up with the 2nd half scoring barrage from Green Bay. There were several players with outstanding performances. Below are my picks for the top players of the week.

You have to start with JJ. He was the best player on the field.  8 catches on 10 targets for 169 yards and 2 TDs. He came close to another TD when he was stopped just short of the goal line. You can also add 37 yards to his total with the DPI he drew in the 2nd quarter. JJ’s impact on the game is immeasurable. He demands double teams and regularly beats them.

Statistically, A-A-Ron was better on Sunday. The eye tells a different story. Kirk was aggressive and the play calling (for the most part) was superb. 24 for 35 for 341 yards and 3 TDs. Kirk almost tossed the game losing interception, but almost doesn’t count in the NFL. He probably could’ve had a few others as well. Kirk bounced back and didn’t back off. That was key in keeping the Packers from overwhelming the team. I am a firm believer in being more aggressive even if it does mean a few more INTs. This is the Kirk the team needs to see going forward. If he plays like this, the NFC better watch out come playoff time.

Watts’ biggest play was a sack fumble that ended the Packers’ 2nd offensive drive.  He wasn’t able to corral the fumble, but it did force a punt from near midfield. The Minnesota offense was able to score on the ensuing drive against the Green Bay defense. Watts pressured A-A-Ron all day and he was perhaps the best defender in purple on Sunday.

I have been very critical of Zimmer this year and, quite frankly, thought he was on his way out the door. The past two weeks have been exactly how this team should’ve been playing since last year. The potential for this team is high if the coaching staff allows the offense to play to its strengths and manages the clock. The end of the first half didn’t work out, but the clock was managed well. Mike setup the offense with a chance to get points before half. The end of the game clock management was superb. The offense got the ball to first and goal with 1:19 left in the game. Mike called for the kneel down to kill the clock. How many times have we seen teams give the ball back to the GB offense and lose? Just a superb call that might have been the difference. In the past, Zim has started the clock killing too early and settled for 35-45 yard field goals. This time he punched it in close and finished the game with a kick shorter than the XPs. The defense wasn’t great this week, but the offensive game plan and clock management made the difference.