Waiting on Darrisaw Is The Right Decision 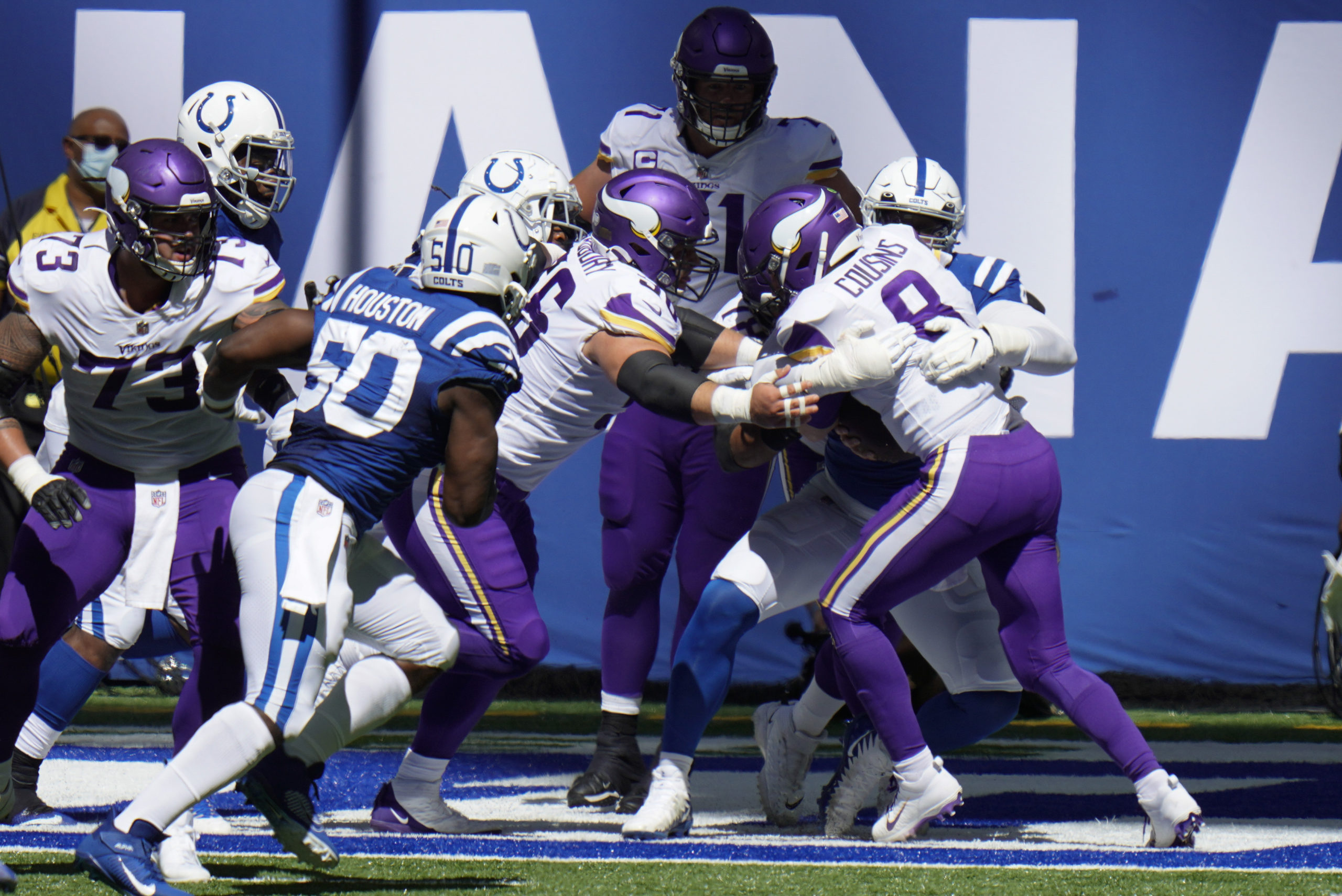 Minnesota Vikings quarterback Kirk Cousins (8) is sacked by Indianapolis Colts’ DeForest Buckner (99) for a safety during the first half of an NFL football game, Sunday, Sept. 20, 2020, in Indianapolis. (AP Photo/AJ Mast)

Vikings fans, by and large, aren’t feeling particularly hopeful. Indeed, many of us are succumbing to the “Here-We-Go-Again” mentality that continually lurks behind purple fandom. It’s not surprising, then, that many of us are getting a little impatient when it comes to first-round LT Christian Darrisaw. When is he going to actually see the field?

I’m going to argue that waiting on Darrisaw is the exact right thing to do. Perhaps a relatively strong performance against Arizona’s imposing pass rush – led by Chandler Jones – will prompt us to practice a little more patience. Such an approach would be wise.

Things were looking reasonably dire at LT through a good portion of the offseason. We basically committed to bringing in OL help in the draft after failing to do anything in free agency to improve. Thankfully, Darrisaw fell to us at 23rd, and many of us (including your humble author) promptly penciled him into the starting spot opposite Brian O’Neill. With a young, dynamic pair of OTs, Minnesota had the chance to see meaningful progress up front.

Unfortunately, ongoing issues with his core injury have undermined his ability to get onto the field. The Vikings haven’t moved him to the IR, instead allowing him to rehab with the team. He’s been able to get into some practice, suggesting he is progressing. Even still, it’s a little discouraging that he still hasn’t made his NFL debut.

Kirby addressed Darrisaw’s status in a recent piece on Purple PTSD: “He hasn’t played at all since joining the Vikings, and we aren’t sure how much practicing he’s even gotten done. However, having Darrisaw available to come in and relieve Rashod Hill could be critical in close, must win games.”

As Kirby suggests, having the option of turning to Darrisaw would be a good step forward for our Vikings. I like Rashod Hill a lot, but I’m not thrilled about the idea of him being our starting LT for the entire season. He’s a great backup tackle; he’s an underwhelming starting tackle. If he’s forced to start for the whole year, Minnesota’s left side will be a concern. His play can be up and down. Put simply, Darrisaw offers a much higher ceiling and the potential for a higher floor.

Take a peak at what The Draft Network had to say in their evaluation of Minnesota’s future LT: “From a size, length, and mobility standpoint, Darrisaw firmly checks the boxes and should immediately become an asset to an NFL franchise in pass protection, outside zone runs, and utilizing his exceptional ability to pull and connect with moving targets in space. Like most young offensive linemen, Darrisaw has room to add functional strength to improve his overall power at the point of attack, but it’s far from a deficiency that is of major concern. The amount of technical growth Darrisaw has demonstrated throughout the course of his career is exciting when considering his starting point for the next level and how he peaked at the perfect time. It shouldn’t take long for Darrisaw to earn a starting role in the NFL and he has the upside to become a standout, franchise left tackle.”

This kind of ability would translate well to Minnesota’s offensive line (or any OL, for that matter). The wise thing to do, though, is to ensure Darrisaw is 100% healthy before putting him into game action. The goal is for him to be our LT for a decade, not just a few games. Let the kid get fully healthy and in shape before throwing him into game action against players like Chandler Jones, Myles Garrett, and J.J. Watt. In fact, it may be worthwhile to have him active for a couple games as a backup, bringing him in for plays on offense and special teams where they need an extra big body.

I know many fans are impatient to see their team’s #1 draft pick. I understand that; like most Vikings fans, I’m looking for the OL to really improve. My only caution is that we cannot sacrifice the future for the sake of expediency. When Darrisaw is ready, he should be out there.

Until then, let’s hope Klint Kubiak can get more performances like the one against Arizona.

– Cameron Dantzler Should Start Week 3
– Minnesota in The Memes: Commiserating Together, Week 2 Edition
– The End of The Vikings First Half Still Has Me Scratching My Head
– Numbers Check: Offensive Outburst Not Enough to Propel the Vikings to a Win
– OF HIGH DEF AND HIGHER POWER