The Vikings season ended Saturday in devastating fashion as the Vikings were bested in every way possible. From the coaches down to the… Everything, the Vikings were outplayed, out-schemed, outfoxed and outclassed by a 49ers team that some thought were vulnerable to an upset, which as we saw from the outcome of the Titans/Ravens game isn’t impossible. And while the Vikings pulled an upset themselves against the Saints last weekend, it was clear after the Vikings first offensive drive resulted in a touchdown on a beautiful throw from Kirk Cousins to Stefon Diggs, that the return of defenders Kwon Alexander and Dee Ford provided a catalyst for a completely dominant performance by the Niners.

That means that the Vikings team that has invested so much into winning a Super Bowl now has been bounced from the playoffs two of the last three years in embarrassing fashion.

How could a team with this much talent and continuity, especially on defense, continue to get utterly decimated when they face great opponents?

This is a team with a supposed brain-trust of not only one of the most respected defensive minds in the game in Mike Zimmer, but also the supposed perfect marriage between a young (again supposed) up-and-coming offensive mind in Kevin Stefanski as well as the brilliant wise old sage that is Gary Kubiak, a defense that has eight players that have been under Zimmer’s system for at least FIVE years, and an offense that at times looked unstoppable.

So… What should we make of all of this?

There are many ways to look at the 2019-20 Vikings season, but there are really just two main angles that people are going to take. Either you can say, well, they were the sixth seed and no one gave them a shot at beating the Saints in the first round, therefore they had a good run and we’ll see what they can do next year. Let’s call that the optimistic view (that, from what I’ve noticed, makes me glad that the betting age is 18).

The other view is that this Vikings team was and is built to win a Super Bowl as soon as possible and anything less than that by definition is not good enough and beyond that this team is over the salary cap as of the writing of this article (and thus, unlike after the Eagles debacle in 2017, they can’t spend either their way back into our hearts/to erase taste the Niners debacle left in our collective mouths), meaning unless offensive coordinator Kevin Stefanski leaves for a head coaching gig, this team will essentially be at best most the same in 2020-21, or at worst down a few key pieces on defense. So, to summarize this angle, they have not only not made it to the Super Bowl but have been embarrassed twice in the process.

Let’s call that the realistic point of view.

Most people will choose some version of the optimistic or realistic view, and from there splinter off into groups as to why it was good enough or more specifically, why it wasn’t. I’ve been discussing the Vikings on the internet since the dial-up days, and because of that, I’ve really seen it all. One thing Vikings fans always do in the off-season or after a loss is decide what they believe the issue is and then argue that until the caps lock button on their keyboard is angrily pounded to dust.

Because of that, it’s hard to really determine what the state of things are, where the blame lies, and what to do about it. So, let’s spend some time attempting to define that, so we can assess the state of the Vikings now that the season is officially over, and perhaps see what 2020 (and beyond) might look like.

I think you know where I’m going with this.

Let’s start by taking a look at the expectations the team had, as that’s really what matters as from a fan’s perspective it’s just too subjective from person-to-person to really determine an average.

The best way to look at it is to avoid the statements like that of head coach Mike Zimmer when he refuted the ‘Super Bowl or Bust’ narrative that was floating around after the team signed quarterback Kirk Cousins, but to rather see the moves the ownership and management has made these past couple of years and the carte blanche they’ve given both Zimmer and general manager Rick Spielman to essentially create the team that they would if they were brothers who somehow turned off the create a player skill limit.

Even when the Vikings knew that their best offensive lineman in Joe Berger was retiring and that Nick Easton’s injury was much more severe than those of us in the media thought, Zimmer was like a little kid at the candy store who already has type 2 diabetes and a cart full of lollipops but not THAT shiny, new lollipop and Spielman was like the dad who can’t say no. In case you couldn’t put that simile together, I’m referring to Zimmer’s obsession with corners, something that wouldn’t be so frustrating if the cornerback position wasn’t the weak link in this defense this season or if this defense ever played as dominant as the 49ers one did Saturday.

While that may sound like, yeah, we need more corners, the fact is that despite what Zimmer thinks or does on a week-to-week basis, teams have an offense, as well. Considering the fact that the Vikings had just signed the biggest contract in the history of the league for a quarterback who was widely known to neither feel nor handle pressure, especially blindside pressure in the pocket, it’s extremely frustrating.

Because of that one (or maybe two) decisions, the Vikings missed out on a guy like Will Hernandez, who made the NFL Writers all-rookie team as a day one starter who started all 16-games in 2018. Wouldn’t he have been nicer to have than Tom “What’s Blocking?” Compton? What’s even more frustrating is that Hernandez was drafted four spots after Mike Hughes, meaning the Vikings could’ve traded down and still nabbed Hernandez.

Guys like Austin Corbett, James Daniels, and Connor Williams were taken between Hughes and Brian O’Neill. Sure, O’Neill worked out great, but Mike Remmers was only a year into his contract with the Vikings and there was something important about Remmers beyond his contract and that’s that he hadn’t played guard before.

This is a Vikings team that didn’t take an offensive lineman before the fourth-round from 2013 to 2017 after selecting “sure thing” Matt Kalil with their highest pick in team history in 2012, which may have had something to do with that decision, but considering that the offensive line is the most important position group in the NFL, you can start to see why this team has squandered this window.

That would be fine if the investments elsewhere, namely on the defense, paid off. While this defense has put up flashy numbers in the regular season, at times playing historically well in specific ways like their amazing third-down defense in 2017, or their great red-zone defense this season. But when they get to the playoffs those things don’t seem to not only not transfer over, but it’s as if a different team is playing altogether and it’s becoming apparent that that’s going to end up being the legacy of the Zimmer era.

The Vikings hired coach Zimmer before the 2014 season after the laissez-faire coaching style of Leslie “Don’t Call me Coach” Frazier wasn’t working out. Zimmer had an immediate positive impact, putting up a 7-9 record in his first year (the best first-year record of any Vikings coach since Dennis Green in 1992). His second year? The Vikings went a surprising 11-5, winning the NFC North and nearly upsetting the Seattle Seahawks in the Wildcard round at TCF Bank Stadium. If not for a missed 27-yard field goal, the Vikings would’ve made it to at least the Divisional Round for the first of three times in the Zimmer era.

That’s not to say that Zimmer doesn’t deserve credit for not only keeping the window of opportunity open longer than we’re accustomed to as Vikings fans (as we’re used to the team imploding after being embarrassed in an NFC Championship game a la 2001 and 2010). The Vikings haven’t that kind of semi-consistency since the Dennis Green era, and we all look back on those years fondly, mainly because of the amazing play of one of the best 1-2 punches in the history of the NFL. But like Dennis Green and even Bud Grant before him, Zimmer has yet to prove that he can get over the hump that get the Vikings to the promised land and it’s hard to imagine after Saturday’s game that he will suddenly figure it out.

Unlike Green, though, the ownership is seemingly all-in on that very notion and ironically Zimmer and Vikings general manager Rick Spielman, have painted himself into that corner by, again, essentially getting everything that they wanted. While the powers that be in the Vikings ownership suite said as recently last week that they had every “intent” to keep Mike Zimmer around, there has to be some hand-wringing as to how these Vikings teams have been utterly dominated in the playoffs two of the last three years.

So the next question is, do we expect anything different next season?

Check out the Second Part of this Article to find out! 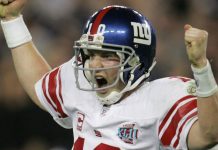 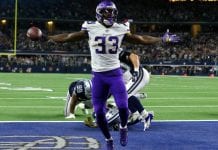