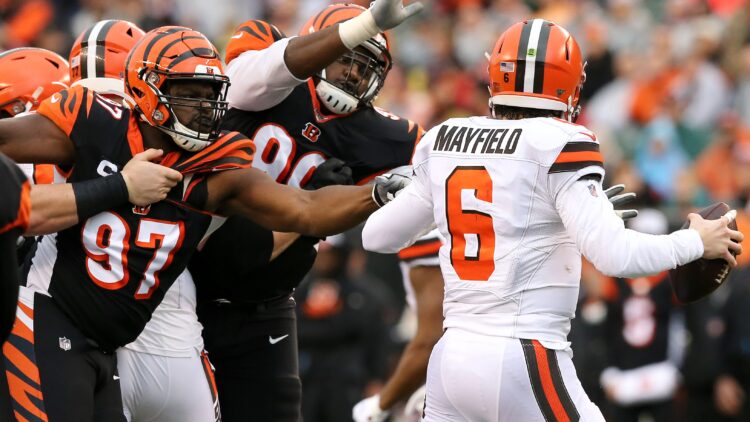 The Minnesota Vikings do not have a dire need at the three-technique defensive tackle position. General Manager Rick Spielman unexpectedly signed Dalvin Tomlinson from the New York Giants in March, filling a 3DT hole experienced by the Viking since Sheldon Richardson left the organization.

Tomlinson is an apt run-stuffer with a knack for rushing the passer. He was employed as a nose tackle in New York, so when the Vikings acquired him, the knee-jerk reaction was “huh?” But soon after, Tomlinson was revealed to be an asset that will indeed play 3DT while providing run-stopping services, too.

Will the Vikings call it good at 3DT with Tomlinson? Probably.

Yet, there remains the temptation to ink ex-Bengal Geno Atkins — a reputable defensive talent that has proverbial “ties” to Vikings skipper Mike Zimmer. Atkins was defensively coordinated by Zimmer during the player’s rise to power in Cincinnati from 2010 to 2013.

But now Atkins is a free agent.

“The previous three teams all have Super Bowl aspirations. Each made the playoffs last season. The Vikings finished 7-9, just outside the playoff picture. With that said, Mike Zimmer’s squad is one year removed from a 10-6 record and a postseason berth. How the Vikings progress this fall may be in question, but they’re closer to being one of the NFC’s better teams than not. Defensively, Minnesota gets Michael Pierce back after the defensive tackle opted out of last season. Plus, the organization signed Dalvin Tomlinson to a two-year, $21 million free-agent contract. Where would Atkins fit? Well, the better question is, “Why would Atkins fit?” Paul Guenther is a senior defensive assistant on Zimmer’s staff. Guenther spent eight seasons on the Bengals staff during Atkins’ tenure in Cincinnati, including four as the team’s defensive coordinator. While Guenther isn’t a Vikings play-caller, his input should be strongly considered in this case. Pierce and Tomlinson should form a mountainous and immovable interior, though they’re not the most explosive defensive tackles. Atkins would be an ideal complementary piece to help the unit’s pass rush.“

The other three teams are the Tampa Bay Buccaneers, Seattle Seahawks, and Cleveland Browns — all franchises firmly in “win now” mode for 2021.

It was also widely reported on Friday that the Dallas Cowboys will host Atkins this summer for a chat.

Atkins tore his labrum in 2020, and the year became a vanilla one for the 33-year-old. The pandemic season marked the first time in the last eight seasons that Atkins missed a single game. Ergo, outside of 2020, Atkins is bulletproof.

When healthy, Atkins is also a maniac for performance. From 2013 to 2019, only Aaron Donald has more sacks as a defensive tackle than Atkins. Signing Atkins – a healthy version – can be perceived as a robust step in the right direction of fortifying depth on Minnesota’s 2021 roster. For now, that defensive-line depth is considered suspect by many Vikings analysts.

The enticing aspect of Atkins’ skill set is balance. When his labrum is whole, he is equally as effective in rushing the passer as he is stopping the run. Normally, a defensive lineman does one trait or the other in a superior manner. Such is not usually the case for Atkins. He stops the run and frustrates passers.

Here’s a look at his career-long performance scored by Pro Football Focus:

A penning of Atkins on a Vikings contract would further disconnect the Vikings from the memory of their 2020 defensive maladies. A defensive line of Ifeadi Odenigbo, Shamar Stephen, Jaleel Johnson, and Jalyn Holmes – would flip to Stephen Weatherly, Davlin Tomlinson, Michael Pierce, and Danielle Hunter — and a rotational side dish of Atkins.

Atkins will likely be cleared for 2021 duty soon, according to Ian Rapaport.