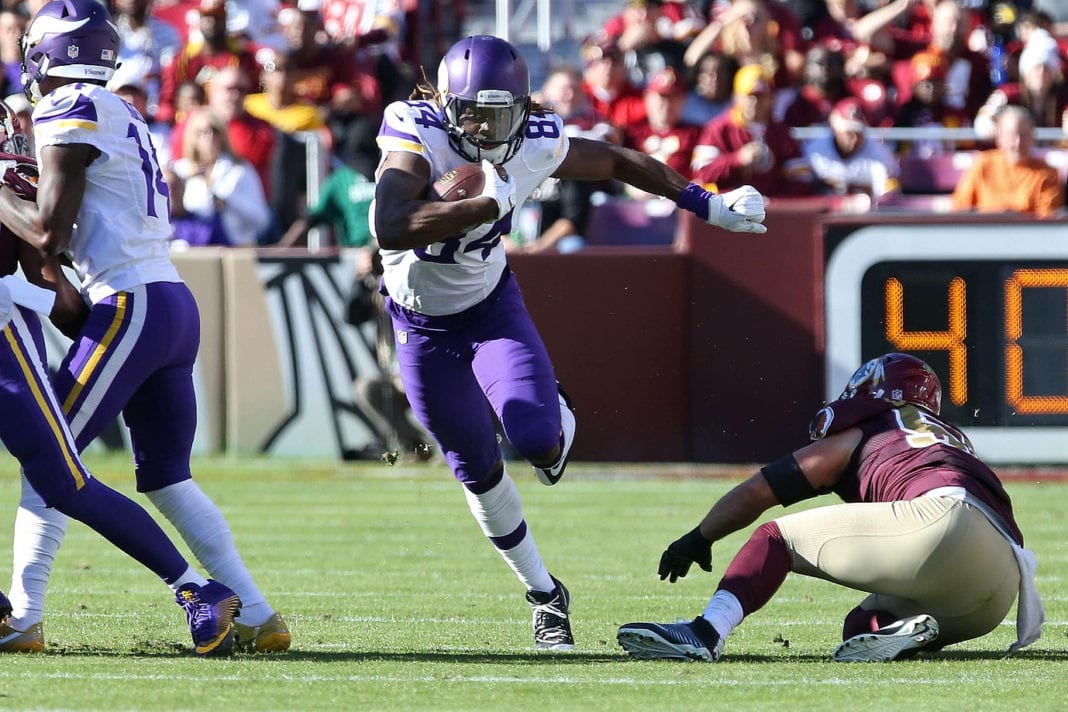 Note from the Editor: We’re extremely honored to be working with Vikings61.com (The ‘V61’) this season! The V61 is a new Vikings news/content site with some of the best writers in the Vikings media landscape, so take a second to bookmark (either literally or mentally) their site and check them out every day when you’re looking for Vikings news. analysis, and history!

In two seasons since Cordarrelle Patterson left the Vikings in 2016, the special teams unit for Minnesota has been an inconsistent and unexciting group, exclusive of its misadventures in field goal conversions.

The Vikings need real help on their special teams squad.  And they need it now. Unfortunately, a guy that could have helped them is now in the Windy City.

You just don’t know what you’ve got until it’s gone.  In this case, it was a two-time First Team All-Pro named Cordarrelle Patterson, who the Vikings decided not to keep after the 2016 season.

Patterson was not a one-trick pony, as some might perceive him.  He was actually a four-trick pony–and an occasional thoroughbred–with skill sets across the board.

Far from a perfect player, Patterson was a guy who could return kicks with the best in history, become a gadget back and receiver, and even blow up a punt returner as a torpedo special-teams gunner.

Throughout his career, it’s been difficult to calculate what a player like Patterson is worth.  The going price tag is around four million dollars, now being issued to him by the payroll department of the Chicago Bears, the Vikings’ chief rival in the NFC North.

Seeing such things on paper doesn’t create a warm feeling inside Viking fans. Nor should it.

In November of 2018, Vikings’ head coach Mike Zimmer admitted to reporters that the Vikings could have found more ways to use the 6’ 2” 238 lb. Patterson, a player who ran a 4.4 40 at his rookie combine and holds the record for the longest NFL return touchdown in history.

“Honestly, since I’ve been watching him on tape (with New England), I’m going to put that in the back of my mind if we ever get a guy like this again–that we can use him in much better ways.”

Zimmer’s hindsight may appear to be 20/20, yet it was the Bears that signed him away from the Patriots this offseason, not the Vikings.

The Vikings’ front office also saw Marcus Sherels, Minnesota’s long-time punt returner, sign with the New Orleans Saints this off-season for about 1 million dollars a year.  This has set back this special team unit even further as they try and decide how to replace him.

The numbers there are perplexing.

Any fodder for contemplation, argument, or regret?

What remains is the Minnesota’s special team unit–exclusive of their unpredictable and somewhat mysterious kicking game–a group that is now not giving anyone any confidence.

It lacks identity and athleticism in the return game and focus and consistency in coverage.

A card deck of kick and punt returners have now tried their hand at the duty, while new special teams coach Marwan Maalouf is not faring much better under Zimmer’s scrutinizing eye then his predecessor Mike Priefer, who decided to depart for Cleveland in the off-season.

Zimmer, still looking to field a credible unit this year, has issued ultimatums of late.

“The consistency of what they’re trying to do is really hard to get a handle on,” Zimmer said to the Minnesota press, “ That’s why I say that special teams, they need to get their rear ends going on that.”

Is this unit missing a spark of a ‘Flash’ Patterson, a guy who could break a game open with a massive return or fire up the troops as a missile coverage gunner?

But compensatory hypotheticals aren’t going to happen.  Instead Maalouf and the Vikings will continue to weave and develop the fabric of Patterson’s old unit, one practice and one preseason game at a time.

It is a daunting task this late in August, just over three weeks before week one of the regular season.