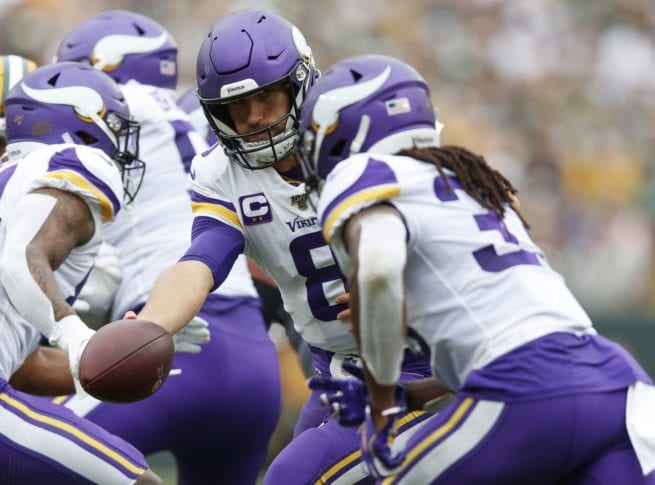 Because the Philadelphia Eagles concentrated on the Vikings elite rushing attack, Minnesota’s play-action game gave them room to go over the top and keep them off-balance all afternoon on Sunday.

3.5 yards a carry won’t impress many in today’s NFL, but winning a big game on the tenacity of 35 carries might. That was the formula the Vikings’ used in Sunday’s game against the Eagles.

It may be a week of WR Stefon Diggs and QB Kirk Cousins in the winner’s circle and under the press lamp, but two Viking running backs should get a piece of that cake also. Give them the ones with the rose frosting on them.

It’s wasn’t rocket science for Vikings’ OC Kevin Stefanski to prescribe a healthy dose of Dalvin Cook for the Philly D last Sunday. And, for the most part, they did fairly well against Minnesota’s run offense. But in the second half, things started to open up.

Setting Up The Bird Traps

On this off-tackle run in the third quarter, the Eagles are drawn completely in on Cook and seem to have him entangled, only to lose him on a spin move and bounce across the field right.

It takes an Eagles’ cornerback–from the farthest position away from the initial line of scrimmage–to chase Cook down after a 20 yard gain. It illustrates the kind of attention that must be paid to a back like Cook, who is displaying the talent of an NFL MVP candidate this year.

On the next series, the Vikings use one less tight end and run basically the same run-fake, giving Cousins a easy pitch-and-catch to Diggs for 15 yards and another first down.

Former Viking safety Andrew Sendejo (42) is in the box rather than the secondary, and he jumps in on the fake, just as does the Eagles’ middle linebacker who might have otherwise disrupted the passing lane.

At the end of the third quarter, the Vikings’ offensive game plan has began to exhaust the Philadelphia defense. After the play-action fake to Cook goes down on this red zone play, it is only the Eagles’ Brandon Graham (55) that gets close to Cousins.

Stefon Diggs feigns a fade to the corner then skates back inside on a post, giving his quarterback a point to put the ball nicely inside the hash of the back of the end zone, producing an insurmountable Vikings’ 31-20 lead.

Vikings’ Win Starts With An ‘R’

In a game where the Eagles kept wraps on the game-breaking running play, they could not compensate their deficiencies in the back half of their defense. Kirk Cousins struck and struck again at their open areas where Viking receivers had found space.

This is how 35 rushing plays works in the new NFL. Stefon Diggs wears the cape after three touchdowns and 167 receiving yards, but the men doing the dirty work, a well-worn offensive line and two sturdy tailbacks, are the stars of the Monday morning film session.

No one should expect things to change in the next few weeks as they travel to Detroit and then return home to face Washington. And why should it? Minnesota has now clearly shown that there’s a wrinkle or two inside that stubborn run game, and we should all start believing in it.