As has been discussed on the site previously (And the purpleJOURNAL Podcast), the Vikings have been linked to Oklahoma running back Joe Mixon, multiple times now. For example:

Mixon, as I’m sure most of you know by now, punched a woman in the face at a restaurant in 2014. Because of that, many NFL teams have completely removed the hyper-talented back from their draft boards entirely. The Vikings brass (general manager Rick Spielman and head coach Mike Zimmer) both traveled to Mixon’s Pro-Day and also held a one and one meeting with him over a month ago. These moves, which were done within the view of the press, have been mostly written off as more ‘smoke’ than ‘fire’. Meaning, the typically secretive Zimmer and Spielman had a semi-public meeting with Mixon in a form of football subterfuge, to essentially confuse other general managers as the draft approaches.

Now, whichever team ends up drafting Mixon will have to also draft the baggage associated with him. In 2017, or the post Ray Rice era, domestic abuse/violence against women (See the difference in the comments below) has become an extremely large issue in the NFL. Many are saying that Mixon doesn’t deserve to play in the NFL, at all, as playing is a privilege, not a right. I personally can’t imagine Minnesota making that move, as much as I may want them to (See below), especially considering the recent firing of Gophers head coach Tracy Claeys over an alleged sexual assault by a group of his players (and his response to it). Sure, the ‘Sex Boat’ scandal is far enough in the past that it’s become a running joke at this point (As has the tenure of the Sheriff they brought in to police the team, Brad Childress). But, Minnesota is a hyper-liberal state (Statement of fact, not an insult) and because of that, again, I just can’t imagine Mixon rocking purple and gold.

As I stated above, I would be open to Mixon joining the team. Why? Well, first of all, I don’t want people to get the impression (Or have the opportunity to say) that I care so much about the team that I’m willing to bring in morally awful players as long as they contribute. That’s not really where my head/rationality is at. Rather, I assume, that if he is drafted by the Vikings, the 2017 Mixon has been thoroughly vetted by Spielman and more importantly Zimmer. Zimmer seems to be a big character guy, and the type of guy who really gets involved with his players, emotionally (See his love for Teddy Bridgewater). So, the assumption (And yes, I do get that it’s an assumption) is that if he is drafted he’s clearly done and said the right thing(s) to get Zimmer’s seal of approval, that is important and shouldn’t be overlooked.

As an alcoholic/pill popper myself, I find it hard to say that someone who made a mistake (As horrible as his mistake was) should suffer the rest of their lives because of that mistake. Now, I understand that that rationality or logic doesn’t apply universally, as there are people who are in prison for life that should be there. But, Mixon’s mistake/crime didn’t warrant a lengthy stay in jail/prison, which should at least at some level show that it shouldn’t be the end of the world for him (As the law reflects the mores/morals in theory, although I do understand that people with a certain stature/level of money tend to be able to subvert the legal system which was probably at least part of the reason that Mixon didn’t receive a felony assault charge despite the horrible injuries suffered by the victim of his blow). I apologize if this has veered into legal theory (I am a Sociology of Law/Criminology/Deviance major (Shout out to the West Bank!) after all) but if we’re going to consider drafting Mixon, we have to look at the whole picture.

So, as much as I understand that my bias (As a huge fan of the Vikings) is seeping into my desire to find a suitable replacement for Adrian Peterson at running back, I also do believe that people deserve a second chance. While he will still end up making millions of dollars (Eventually, if his career pans out), he is also being punished by the league regardless. Mixon is/was arguably a top three back in this year’s draft. The league’s interest in feature backs has mostly evaporated, but even with that, Mixon most likely would’ve gone in the first (or early second) round had he not punched someone three years ago. While some people see the Vikings taking Mixon with their first pick (in the second round) he could fall a lot further (If only four teams are interested in him). That will impact his rookie contract and cost him hundreds of thousands, if not millions of dollars. I know, boo hoo, he’s still getting drafted and still gets to play in the NFL, but our society doesn’t continuously punish those who have paid their debt to society. Like the recently reversed decision regarding the Minnesota Sex Offender Program’s constitutionality, there are nuances when it comes to paying your debt (Based on an on-going threat), so the question would be. Is Mixon a continual threat to society/women?

That’s something that, again, I trust that Zimmer will be able to decide. His decision will be clear in a few weeks, when the draft begins. So, stay tuned and click over to our Message Board to discuss this and everything else, Vikings! 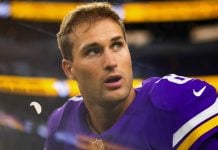 if he is available, they have to get him.