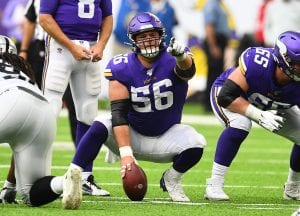 Death, taxes, and a lousy Vikings OL. These are life’s constants. The Vikings OL continues to occupy a modest position in the most recent PFF rankings. Here is what they had to say about our 26th-ranked OL:

“First-rounder Christian Darrisaw made his NFL debut for the Vikings in Week 5, and while he didn’t show much to suggest he will be a huge upgrade right away, there isn’t a whole lot of room to be significantly worse. The snaps he played for Rashod Hill were the first missed by any of the starting five, but that hasn’t helped the unit excel on the field, with only right tackle Brian O’Neill boasting a PFF grade higher than 70.0 in any facet of play.”

For a few weeks, we had some iOL optimism. Garrett Bradbury still looks like a bust, but Oli Udoh and Ezra Cleveland had some promising moments. Unfortunately, they’ve since hit a rough patch. Our only o-lineman who is performing even reasonably well in PFF‘s system is Brian O’Neill. Any Vikings fan who is capable of cloning our RT should contact the Wilfs.

Until that technology arrives, the Vikings OL is likely to continue performing poorly in the PFF rankings. Brabury is the 25th-ranked center. Cleveland is coming in at 44th, Udoh at 39th. Our worst o-lineman, by far, has been Rashod Hill. With a 39.9 score, Hill is looking like the 72nd OT in the NFL (only 74 are ranked). Christian Darrisaw had some strong plays last week, so let’s hope the kid is ready to roll soon.

Of course, things will be easier for the entire offense if the injury report doesn’t end up being as foreboding as it seems. Finding a way to get rid of the ball quickly to Justin Jefferson, Adam Thielen, and Dalvin Cook will make life considerably easier for the fellas up front.