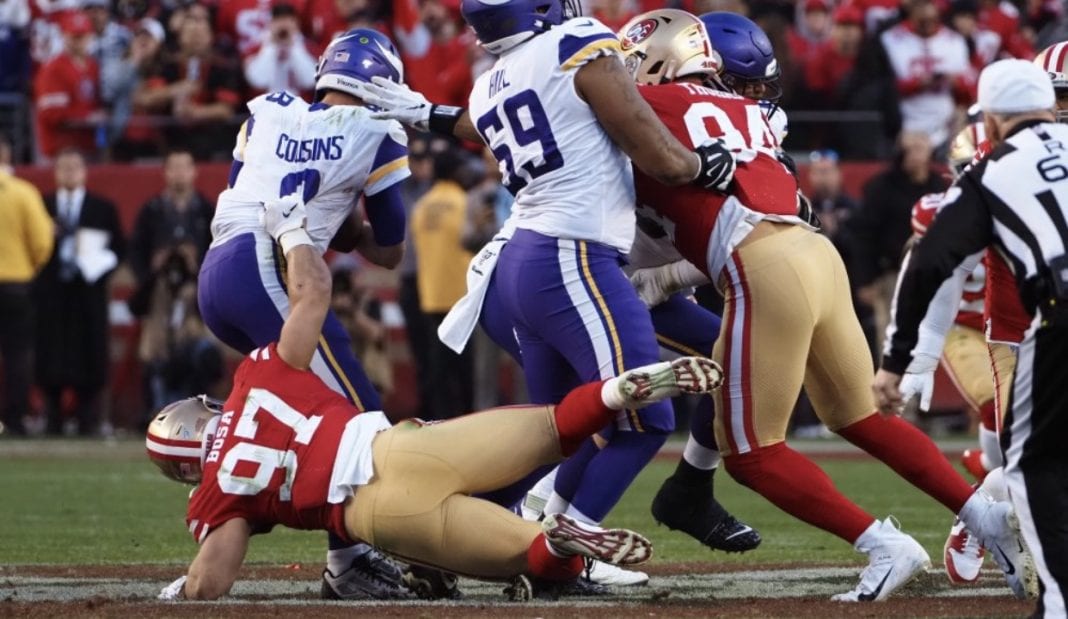 The Vikings offensive line was the emphasis of last offseason. Minnesota added rookie Garrett Bradbury, veteran guard Josh Kline, and added Gary Kubiak to help cover up the deficits up front.  And that’s exactly what happened, the lack of talent was covered up and not improved.

According to Pro Football Focus the Vikings offensive line saw an extremely minute improvement in pass blocking, and failed to crack the top twenty-five in pass blocking rating for the second year straight. The run blocking improved, but that is largely do to the scheme implemented by Gary Kubiak. In their seven losses the Vikings averaged only about 94 yards rushing, and even that is largely due to two outlier performance that saw them run for over 170 and lose. It wasn’t all bad this season. Minnesota saw their pressure number come down by almost sixty, but The sack number was the same at 34 Cousins although was allotted more time to throw.

This time around the Vikings are going to have to sacrifice some veteran players to ensure the offensive line is ready to play next year. Minnesota’s front office needs to be ready to make Brandon Scherff or Joe Thuney the highest paid guard in the NFL. They could spend another first round pick on an interior player, but pairing Bradbury with a rookie would be less than ideal. Last year the Vikings passed on an elite talent in Roger Saffold, which in hindsight seems to be a massive mistake. Saffold is helping Derrick Henry break  playoff records and the Vikings rushed for 18 yards in the most important game of their season. Current starting guard Pat Elflein put up another disappointing season after his transition to guard. Right guard Josh Kline in the other had has been great when healthy. He has been the most effective lead blocker and the best interior pass blocker. Sandwiching Bradbury in between two good veteran would do wonders for his game. This In last weeks game against the 49ers he put up a pass blocking grade less than ten which is abysmal. As far as tackle is concerned it may be time for Brian O’Neill to move to left tackle. A move all fans were dreading, but now it seems like the only option.

The upcoming Draft does not seem to have many solid options to start right away at tackle. The ones that do look NFL aren’t gonna make it close to where the Vikings are drafted. There are free agent options like Demar Dotson, and Anthony Castonzo, but taking on another big contract like Rieff’s isn’t likely. Swing tackle Rashod Hill is also likely to test free agency because of the emergence Oli Udoh. Brian O’Neill has been a top tackle since entering the league, and is fully capable of making the transition. He has shown the athleticism and toughness to contend with anybody, and has experience at left tackle. Oli Udoh the hypothetical replacement is more of a risk. The sixth round pick has impressed in every chance he has gotten, including a  dominant performance against former defensive player of the year Khalil Mack. Udoh poses no more risk than a first round rookie, given he has been polished for a full season and already knows the system . so the Vikings don’t have much to lose by giving him a shot at right tackle.

Minnesota has a lot of questions marks this offseason, and very little answers. The Vikings championship window is closing fast, and the front offense dosent have a lot of time to right the ship.