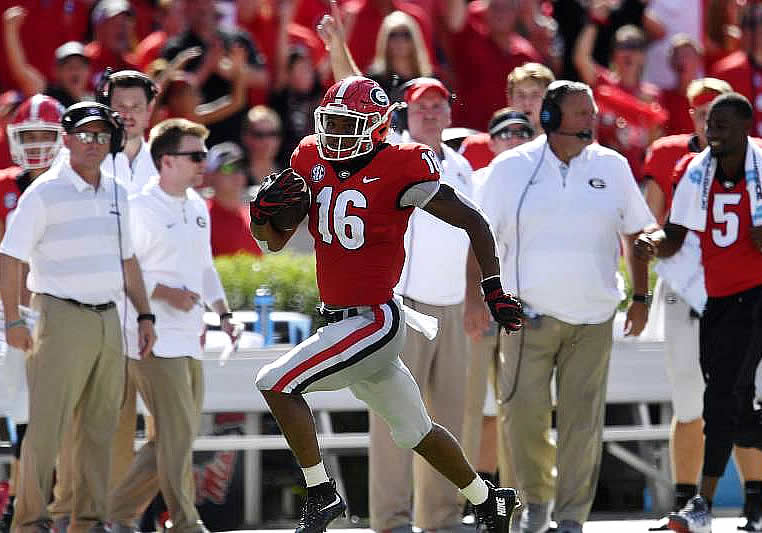 Once first-round pick Laquon Treadwell was clearly diagnosed as a failure, the Vikings went away from making the wide receiver position a priority in the college draft. They need to return to such an idea–with ‘fast’ on the ticket.

No one’s knocking Vikings’ rookie WR Bisi Johnson here. The idea that a seventh-round pick from Colorado State made the team and has contributed is nice. But considering the fact that Johnson has given the Vikings 24 catches in 11 games–four of which Adam Thielen has missed–does not lend credence to the notion that he’s really what the Vikings need with a run-first offense and diagrams on a play-action vertical passing game.

No. What the Vikings need with all their premiere skill position athletes in uniform and healthy is good old fashioned speed at the wideout positio

We’re not talking about drafting Randy Moss here. Nor even one of the top five pro-ready receivers in college football. Instead, identifying a small group with both football and track skills, focusing on the best player fit and developing that player into a primary ‘Z’ receiver.

Of course, it’s easier said than done, but how much more difficult is it to educate a raw college cornerback in the defensive scheme of a Mike Zimmer?

Speed As a Singularity

NFL history is full of fast guys whose speed was their only weapon. Offhand, three receivers–employed by the Vikings themselves–come to mind: Quadry Ismail (1993-96), Kelly Campbell (2002-04) and Aldrick Robinson (2018).

Look no further than the difference in the Philadelphia Eagles offense with and without WR DeSean Jackson this season, or the impact a healthy wideout Robby Anderson has given the New York Jets when QB Sam Darnold was suited up. Both pass-catchers stretch the field of defenders and give their offenses the opportunity to explore other mismatches.

I think the mention of Kansas City WR Tyreek Hill–and even his recently drafted replacement, rookie MeCole Hardman–whose 40 times, 4.27 and 4.3–give Chiefs head coach Andy Reid and his quarterback Patrick Mahomes a sundry of options with their dangerous speed, is the most appropriate illustration of this offensive diagram.

A little research shows a bevy of college athletes that may be taking the step to the professional rank in 2020. They include Demetris Robertson from Georgia, John Burt and Devin Duvernay from Texas, and Jalen Reagor from TCU.

As for the aforementioned players; Tyreek Hill was drafted in the fifth round, Hardman the second. DeSean Jackson was also a second-round pick and Robby Anderson went undrafted.

Finding speed to augment the Vikings’ offense in 2020 will come in a concerted ‘War Room’ search for it.

For as long as Mike Zimmer remains the head coach of the Vikings, they will be leading their offensive charge with Dalvin Cook and most likely, a zone-run scheme.

Soon enough, the Vikings front office will sign Cook to an extension that will keep him in Minnesota for several seasons. Signed also for several years are receivers Adam Thielen and Stefon Diggs. Rookie TE Irv Smith Jr. is the future at the Vikings tight end position.

Right now their biggest speed threat is Diggs. No doubt the soon-to-be 26-year old from Maryland is swift, but he’s not a guy who can “take the top off” as corners say.

“Great release, great route runner … but not as fast as others he (Harris) has shadowed this season. “He ain’t burning us like those guys.”

Yes, Diggs did indeed beat Harris on a 54-yard touchdown in the game’s second half on Sunday, but it was because Bronco safety Kareem Jackson was out of position and should have been in the middle of the field, confessed Denver head coach Vic Fangio.

The point is–the Vikings have quicks–but they need a burner to open this offense up to the days of ’98. With this run game, this young offensive line, and this fortified receiving corps, the sky is now almost literally the limit.

There’s a very fast football player out there that will fit. If and when the Vikings find him, they could very well upgrade this offense to the edge of unstoppable.