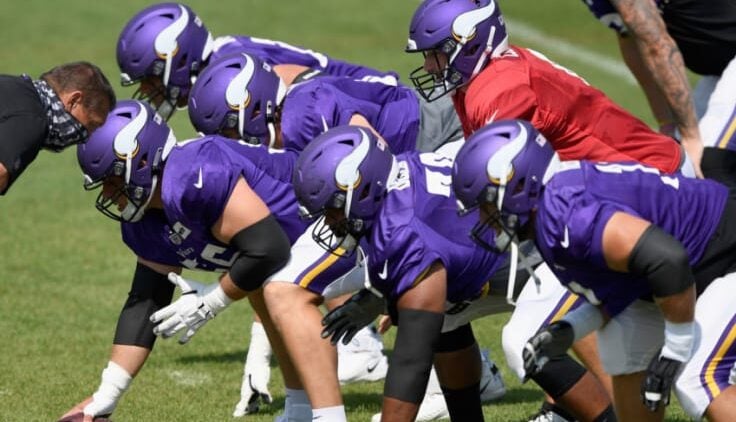 The Minnesota Vikings offensive line – as per usual – has struggled. Nevertheless, fans ought to be encouraged by the Christian Darrisaw – Brian O’Neill tandem. Those two provide a strong foundation for future success. Toss in Ezra Cleveland (who has quietly been playing well) and the team has something. Far from elite, but it’s a start.

Lost in the Kyle Sloter shuffle was the news about signing offensive tackle Rick Leonard. He was chosen in the fourth round of the 2018 draft, but hasn’t been able become an NFL regular. Here is what Bleacher Report had to say in their pre-draft evaluation:

Rick Leonard has the size (6’7″, 311 lbs) NFL teams want, but he’s a raw prospect who will take a patient coaching staff to mold him into a contributor. He’s a converted defensive lineman who has the speed and power to become an NFL offensive lineman, but his technique and fundamentals are still far behind many of his peers’.

BR goes on to suggest Leonard ought to be a priority UDFA and then compare him to T.J. Clemmings, which is unlikely to inspire much hope in Vikings fans.

When the draft actually occurred, though, Leonard got picked up in the 4th. Sean Payton had high hopes:

He’s a big body, he’s physical. Right away, I can see a jumbo role. I could see him compete to be a game day backup tackle. I thought as the season went on with his film, it got better and better, and you could see him becoming more and more familiar with playing on the offensive side of the ball.

Fans shouldn’t be expecting the next Trent Williams or Tyron Smith. Rather, the hope ought to be for something closer to Rashod Hill at his best. Having a quality swing tackle is a little bit like having a great QB2. It’s easy to overlook their importance until the starter goes down. All of the sudden, a backup becomes one of the most important pieces on the team.

The Vikings offensive line is definitely a work in progress. It will remain a priority heading into the offseason. Perhaps Leonard will be able to find a role.