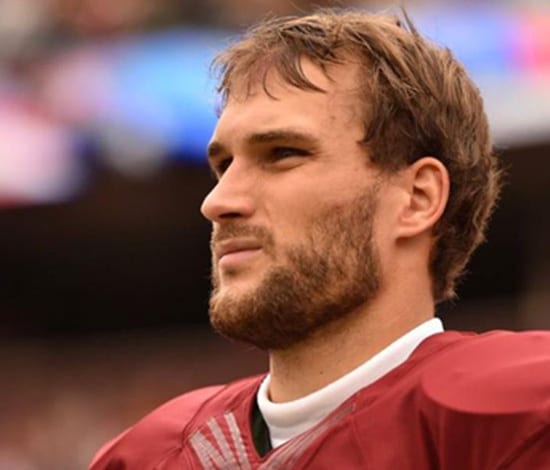 The Minnesota Vikings and New York Jets don’t play each other very often—and they will meet for the 11 time in their history on Sunday (with the Vikings trailing the Jets 2-8 in the series). With the exception of the recent AFC expansion teams of Jacksonville Jaguars (played six times), Baltimore Ravens (six times) and Houston Texans (four times), the Vikings have played no other teams fewer times. Yet, suddenly, there are multiple storylines between the Jets and Vikings, and they involve two players who weren’t on either team last season.

The primary storyline has to do with Vikings quarterback Kirk Cousins, who, when entering the free agent market last season, was courted by the Jets but ultimately chose the Vikings instead. A recent column in the New York Post was critical of a documentary released on the Vikings’ website that chronicles Cousins’ free agent journey to Minnesota. The upshot of the column was that Cousins used the Jets (who offered to pay him $2 million more per year than the Vikings) to leverage out of Minnesota, where he wanted to end up as quarterback. It was only Tuesday when the media sideshow began in earnest in New York, and Cousins addressed the criticism on Wednesday at his TCO Performance Center press conference.

“Criticism is going to be part of things, particularly when you are going into an opponent’s media climate—they’re going to find ways to criticize,” Cousins said. “That show was meant to show the journey and show how impressed I had been with the Minnesota Vikings. It was not meant as a slight to anybody else. This is the NFL; every team is run well and has great coaches. I have tremendous respect for coach [Todd] Bowles. I’ve played against him, and he’s had my lunch a couple times. It was really meant to show the Vikings were a great fit for us.”

But a sideshow by definition is not the main event, which will take place at MetLife Stadium Sunday at noon, when the 3-3 Jets will try to hold off the recently righted ship of the 3-2-1 Vikings. The game will pit the Vikings defense against their third opposing rookie quarterback in a five-week span, and the Vikings have started to play them better since Josh Allen of the Buffalo Bills took them apart in Week 3.

This week they face Sam Darnold, who was the third overall pick in the NFL Draft last spring. And Darnold has impressed many, so far, with his ability to lead the Jets.

“Very strong arm, very accurate, moves well in the pocket, scrambles well and gets out of there fairly quick,” Vikings head coach Mike Zimmer said. “Seems to be going to the right place with the ball. He’s thrown some great deep balls. What everybody tells me, he’s a very smart kid, a really good athlete. I’m sure they work with him each week on what to try to accomplish throughout the week; their wide receiver screens. They’ve got some really good players—the back coming out of the backfield, the different packages they use, they try to keep you off balance.”

But his growing leadership skills aside, Darnold isn’t yet rewriting the record books (the Jets are 27th in the league in passing yards per game with 210.2). The Jets offense, rather, does most of their damage on the ground. They have the 7th-ranked rushing attack (with 130.3 yards per game) thanks to the very efficient two-headed monster of Isaiah Crowell (ranked T-9 with 71.7 rushing yards per game) and Bilal Powell (ranked 21st with 53.8 ypg.). When the Vikings defenders say this week they have to stop the run and then get after the passer, they really mean it.

And that’s where the second story line comes into play: defensive tackle Sheldon Richardson played for the Jets in 2016 and will be responsible for stopping the run. Richardson returns to New York for a revenge game against a team that hastily and unceremoniously traded him to the Seattle Seahawks last season. Richardson is going to be looking to destroy his old teammates on the Jets and blow up the New York backfield, right?

“[It’s] another game. I never put myself above the team,” Richardson said. “Whatever personal vendetta I have is between me.”

Well, maybe not so much. Asked if there was a personal vendetta, Richardson said there wasn’t. He said the trade was a business.

Perhaps linebacker Anthony Barr, who has picked up his production of splash plays in recent weeks, has the proper attitude.

“I think it is important to stop the run and force [Darnold] to make plays with the ball in his hand,” Barr said. “Obviously, he is very equipped to do so. Good arm; great athlete; smart with the football. He’ll take his chances. They are at their best when they run the ball well. So, it’s going to be important for us to focus on that and try to get after the quarterback.”

Get after that young quarterback, that’s right. That’s what Cousins told his teammates last week before the game in the fire-up speech (Barr said Cousins’ rant was more PG than Everson Griffin’s have been, but still effective). Cousins said that he was once a rookie quarterback and implored his defensive teammates to “smother” Josh Rosen.

But Darnold has been starting since opening weekend and may not rattle as easily as Allen, who was in his third start. Cousins would like to see, perhaps, his defense force a couple of turnovers by the rookie (the Jets have given up two per game this season). But he would be wise to take care of the ball himself, as the Jets defense brings an attack that has forced five fumbles and grabbed 10 picks (the 15 turnovers rank 2nd in the league). Cousins has fumbled six times this season (losing five), which is ranked T-2 in the NFL.

“What stands out the most is the turnovers they have created,” Cousins said. “Such a big part of success in this league is protecting the football. And, if you are a defense, trying to turn it over. They have done that so well, so we obviously feel a need to protect the football, as we always do, but when you are going against a defense as good as they are at taking away, just having a heightened sense of awareness and the need to not give them that whenever possible.”

Turnovers could determine the outcome of this game (as they often do in the NFL), but I believe the Vikings (who are three-point favorites) can win the game without them. A continued focus on playing a simplified defensive scheme (which has worked the past two weeks) will go a long way in shutting down the Jets offense (which is not strong in the red zone).

A passing game that has been strong all season for Minnesota should be able to make headway against the Jets’ 22nd ranked pass defense (272.3 yards per game). The Vikings should also continue running the ball, although the Jets run defense (ranked 17th giving up 108.7 yards per game) is not as porous as the one they saw last week against Arizona (which gives up 151.2 yards per game). So, maybe a couple turnovers would help in this one.

The Jets are facing only their second team that currently has a winning record, so the Vikings will keep their winning streak going and spoil any opportunities for the local observers to rain on Cousins’ and Richardson’s return parade.