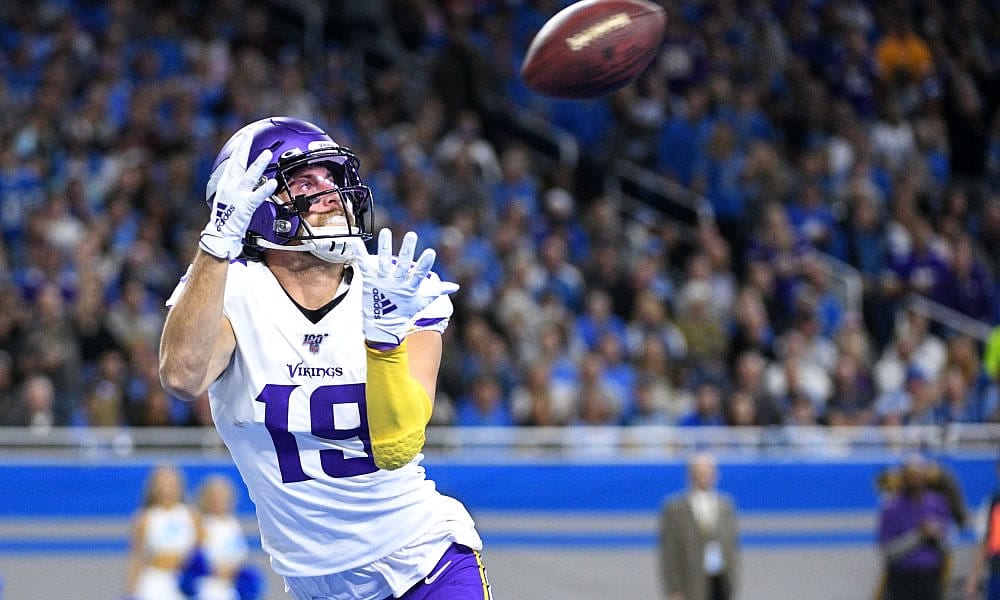 With a run-first offensive scheme and a quarterback as good as any in the play-action game, the Vikings have relied almost solely on WR Stefon Diggs in 2019 for pass receptions over 30 yards. As starting partner Adam Theilen prepares to make his return to the field on Sunday, that may change, enabling QB Kirk Cousins the opportunity to work the L.A. Chargers’ defense in deeper dimensions.

We’ve all heard the quarterback say, “we were just taking what the defense was giving us.”

It’s a common reply to a question about getting first downs and points on the board that signal-callers like to use. Usually, it follows a game where a rung game is prominent and the short passing game has been utilized at length in a victory.

Defenses and defensive coordinators spend a lot of time trying to keep “everything in front of them” when it comes to the opposition. They don’t want a guy like Kansas City Chiefs’ wide receiver Tyreek Hill ruining a game with just two plays and forcing their offense into a reactive game that they didn’t design.

Two weeks ago, the Vikings made the mistake of playing a consistent Cover-2 defense in Seattle that Seahawks QB Russell Wilson said he was surprised to see was “super deep” (in terms of safety play).

What Vikings’ defensive play-caller Mike Zimmer was afraid of was obviously Wilson’s playmaking ability out of the pocket and his deep arm–alongside the recent poor play of his Vikings’ cornerbacks.

What happened to that preventive game design was 43 Seahawk running plays for 218 yards and two touchdowns. Seattle, “taking what the Vikings gave them”, accumulated 444 yards of total offense on the game in a 37-30 victory.

The Right Balance For Big Wins

On the other side of the ball, the Seahawks concentrated their defensive efforts on the Minnesota ground game and held the Vikings to a mere 78 yards on the ground.

After the game became 31-17 in the third quarter after a flurry of Viking mistakes and Seattle offense, Minnesota was out of their element, being forced to pass into a defensive fold completely anticipating it.

The fact that QB Kirk Cousins found both fullback C.J. Ham and rarely utilized WR Laquon Treadwell on two passes that amassed 94 yards in a comeback effort shows some promise in that one, this team has an offensive line giving Cousins time to throw, and two, the Vikings’ quarterback can find guys not named Stefon Diggs open down the field.

Enter one sorely missed Adam Thielen. A Pro Bowl receiver who will take those two receptions, add two more, and peel double-coverage off of Diggs for the most of the game.

Watching Thielen take questions at the Vikings practice facility yesterday revealed an athlete with real confidence he will be ready to play this Sunday in California. This means the Vikings will be returning to the ideals of their offense to start the 2019 season–with a whole lot of hard wisdom baked into the equation.

Running For The Sake Of It

Mike Zimmer is hell-bent on making the Minnesota ground game one that is never neglected, even when common logic would call for a predominant passing game when the chips are down.

His defensive brain tells him that a defense that recognizes only pass has a great advantage in a contest. Pass-rush and pass-defense is an easier game than having to watch the whole field.

What a run game also enables–as everybody knows from watching this Vikings team–is effective play-action passing. But what has been missing from this offense (in the noble strides it has made), are those consistent shots down the field that put a team in the red-zone as well as break games open.

No doubt the Vikings’ make a plan of it to bring their strength to the Chargers in L.A. offensively. Their defensive coordinator Gus Badley, former DC and head coach for top NFL defenses like Seattle and Jacksonville, will be ready to stack the run with a squad now ranked 8th in total D in the league.

But what do they Vikings plan to bring to the table against that defense now ranked 4th in passing yards allowed in the NFL? Is Thielen up to the task of “taking the top off” (moving safety help) of his partner Stefon Diggs?

In that mind, will Thielen’s presence open up those mid-field routes that rookie WR Bisi Johnson and TE Irv Smith Jr. have proven to be best at catching?

Lastly, can this returning wide receiver enable the true “yin’ to the “yang” that coaches Kevin Stefanski and Gary Kubiak imagined of this offensive unit in the Summer of 2019?

If Adam Theilen has shown us one thing in his career, it’s that’s he a good guy to rely on when a play has to be made. The time for that kind of play is now.