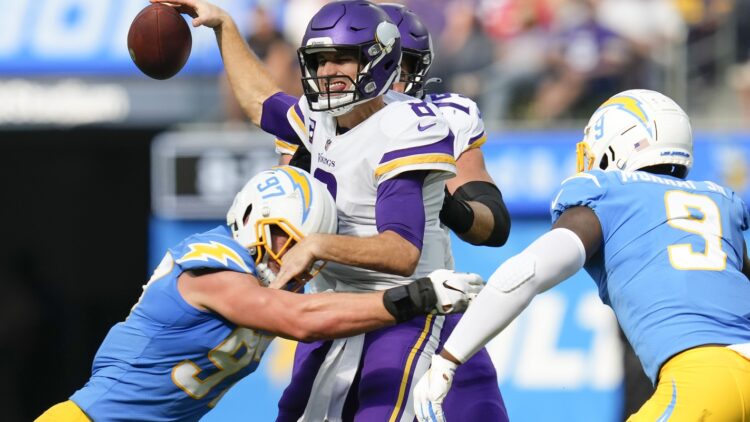 I mostly treated it as a humorous foible. Kirk Cousins tried to take the snap from the RG; Oli Udoh must have been so confused. In fairness to Kirk, he spent the moments immediately preceding the RG snap trying to get his WRs lined up in the correct spot. It’s that issue that led to his confusion. Alexander Mattison did his best to get Kirk in the right spot, but a timeout needed to be called. Unfortunately, this brutal play may have foreshadowed what was to come. The Vikings put together a similarly awful 4th down play against the Lions.

Let’s establish a few details here. The team is down by 8 points and it’s 4th and goal. It’s the definition of a “must have” play. The Vikings are in 11 personnel: 3 receivers, 1 RB, and 1 TE. It’s a pass look, though the threat of the run is still present, especially with where Mattison lines up. Unfortunately, Jefferson and Osborn seem confused about where they ought to be on the field. It should be trips left but they’re over on the right side. By the time this gets sorted out, the Vikings had to call a timeout.

Take a look at the example from the Detroit Lions disaster. The fourth down play happens around the 1:54 mark:

It’s a 4th and 10 at a critical moment. Like the earlier play, the Vikings are in trips left. Before the snap, Mattison motions toward the backfield, but this occurs with very little time left on the play clock. Yet again, the Vikings are rushing to make the play work. It’s this sense of being rushed that makes Mattison appear confused on where he’s supposed to go. The Lions are crowding the LOS with 7 potential pass rushers. Cousins seems to recognize this too late as Mattison tries to cross over toward the right side to pick up the unblocked man. It doesn’t work; Cousins has no time to get the throw away. One of the worst parts of the sequence is that the Vikings were still holding onto a timeout.

Seeing these plays side-by-side is discouraging. The Vikings are unable to make either of their 4th down plays work. Both resulted in a missed opportunity for points, similarly revealing the struggles from Klint Kubiak. The team may be 60% on their fourth down conversions, but the lack of execution on these two important plays underscores how not every play is made equal. When they absolutely needed things to be crisp, the offense wilted.

The rookie offensive coordinator has demonstrated improvement this season. One has to wonder, though, why Zim opted for such an inexperienced play caller. True, there was some continuity insofar as Kubiak was Cousins’ QB coach. The move toward OC would therefore be more seamless than an outside hire. Nevertheless, the team’s inability to deliver at various clutch moments has hampered them throughout the 2021 season. It makes one wonder if hiring a more experienced OC would have been the right thing to do.

Football coaches constantly preach about the importance of controlling what one can control. The reason why it has become cliché is because it’s actually true.

The OC can control his offense’s understanding of the play, the attention to detail, and the overall buy-in. Unfortunately, the team lacked the most basic components of a successful play in both of these instances. So much of football comes down to what occurs off the field and then what happens in-between plays. The actual plays, after all, only last for a few moments. In these two 4th down plays, the Vikings demonstrated that they failed to adequately prepare for the big moment.

If things continue along their current trajectory, the Vikings will again be searching for a new offensive coordinator in the offseason. That means that Kirk Cousins – assuming he stays – will once again be dealing with a new voice in his headset.