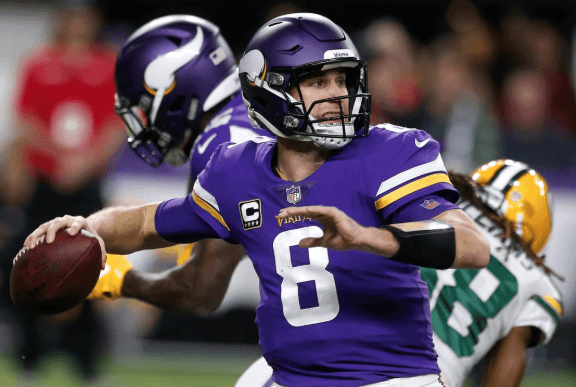 Flying to Philadelphia just two days before the Vikings start training camp made for an interesting experience. There were certainly people on the flight in Eagles clothes, perhaps gearing up for the season (of course, there was a Green Bay Packers fan on the flight, also, and she spent time waiting to board telling everyone in earshot how many times “we,” meaning the Packers whom she doesn’t play for, has been to the Super Bowl—you can choose your seat but don’t get to pick who sits next to you.)

But I digress. I was flying to Philly, where the Vikings lost the NFC Championship two years ago. And the Vikings season since then was an unmitigated disappointment as they had spent a boatload of money on a new quarterback and proceeded to follow up that exciting 2017 season with an 8-7-1 record and out of the playoffs in 2018. That makes 2019 a huge season for just about everyone involved with the Purple.

That starts with head coach Mike Zimmer, who despite signing a contract extension a year ago, has plenty to prove this season. That is not to say that another season on the outside of the postseason will end his tenure in Minnesota, but it will stoke the fires among the fan base (and in the media) for plenty of speculation in that regard.

You may as well handcuff Zimmer to general manager Rick Spielman and consider that if one of the two is going down, the other is headed with him. Once again, we are not suggesting that such a thing should happen if the Vikings falter in 2019, but the calls for it could increase if the numbers in the win column decrease.

That is because Rick and Zim went all in on quarterback Kirk Cousins last season, signing him to a three-year deal worth $84 million guaranteed per season. That’s a lot of scratch for a signal caller who has yet to win a playoff game, is aware of his record and admitted he has to play better. Therefore, this becomes a huge season for Cousins, also. This is the second year of his three-year deal and the expectations are going to be ratcheted up for the wealthy quarterback.

Somewhere along the line, Zimmer said it takes a couple seasons before a free agent actually settles in and finds his stride with a new team. There is plenty of truth to that, so we should be able to able to expect more out of Cousins this season. He certainly is:

“I think the next level, really, is all about winning. I’m pretty much a .500 quarterback in my career so far, and I don’t think that’s where you want to be, and that’s not why you are brought in or people or excited about you,” Cousins told ESPN this summer.

But Cousins did put up some good numbers last season—70 percent passing, 4,298 yards, a 30-to-10 TD-to-interception ratio—it’s just that the team’s record didn’t reflect what one might expect from a decent quarterbacking season. Ultimately, the QB is paid to win games—as are everyone associated with the product on the field—and no tally of touchdown passes or passing yards are ever going to outshine a below .500 record.

Cousins knows this and appears to want to change everything about last season and his perception as a QB who struggles in big games. He should have a better offensive line in front of him to help make that happen, but at this point, that notion is still on paper and has yet to be proven on the field.

Add to that the factor that the Vikings offense will be new again this season with Gary Kubiak coming in to help out Kevin Stefanski in running the offense. Cousins has to orient to a new system, a new play caller and a unique two-headed monster in Kubski or Stefaniak, or whatever you prefer to call it. There’s plenty of moving parts and, it would seem, plenty of people to share the blame if things go south.

The defense will be pretty much the same under its architect Zimmer and with most of the principles returning for another season. The DBs are back (save for cornerback Holton Hill who will miss the first eight games); the linebackers from last season are intact (thanks to Anthony Barr jilting the Jets); and the defensive line should improve a bit if Everson Griffen returns to form after his lost season last year. But they need to play better as a whole. The defense’s rankings were decent but down from two years ago when the offense rode them deep into the postseason.

Speaking of Hill (who was suspended for PED and substance abuse violations), his situation was one of two offseason stumbles (Roc Thomas’ suspension and subsequent release being the other) for a team that has kept its nose clean in recent years. Hopefully, those are the end to the off-field issues, and for what it’s worth, they have been dealt with before the team arrives at TCO Performance Center this week.

Ultimately, it comes down to this team performing like they did two seasons ago when a strong defense enabled a sufficient offense to win games and make a deep postseason run. They got lucky at times (see: Minneapolis Miracle) and got a career season out of their quarterback, but they made the most of opportunities and took the team (and it’s fans) on a wild ride of excitement and hope. They say Zimmer teams do well in alternate years, so this season is on the up cycle.

But you can’t always count on good fortune and fanciful trends. You have to have the players in place to get the job done. The Vikings feel they do with a decent defense, improving offense and infusion of good, young players. But the NFC North Division is improved and the schedule is tough, so it would seem that we are going to find out just what this team really is: a replica of the 2017 squad that was one game away from the Super Bowl in their home stadium or just an also ran that needs to be rebuilt. This season should inform that question mightily.

After touching down in Philly, I was reminded of all those Eagles jerseys I saw running around downtown Minneapolis two winters ago, and I can still hear the cheers of their fans as they celebrated a Super Bowl title through the streets on that icy cold night—it makes me think of what could have been.

Vikings fans like to think that 2009 was the year they should have won it (but Bountygate robbed them), on in 1998 when the best offense in the league came up short. I don’t think too many think that 2017 should have been there’s—the Eagles proved the better team in the final two games of the playoffs. But, now, at the precipice of a new season with “almost” still alive in our recent memories, Vikings fans can think once again think that this may be the one. Let the dreaming begin.