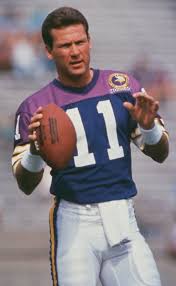 When I think of the late Wade Wilson, I think of the guy I used to refer to as “Old Reliable”, because that is exactly what Wade was. You don’t play 19 years in the NFL without being a tough guy.  Wade gave you his all as a backup quarterback or as a starter and he was a solid QB, whose hard work lead to a career that lasted from 1981 to 1999 and spanned not only a 10 year run with our Minnesota Vikings, but he also played for the New Orleans Saints, Cowboys, Falcons and Raiders.  He retired after the 1999 season and became a respect quarterback coach with the Dallas Cowboys.

As an 8th round draft pick for the Vikings out of East Texas State University, not much was really expected from Wilson.  He didn’t see much action for his first couple years, but that would change in 1984- when he filled in for both Archie Manning (yes… that Archie Manning) and Tommy Kramer.  And for the next few years, Wade Wilson will have a hand in some key Vikings games including a magical run in 1987 and a pro bowl campaign in 1988.

Blessed with a big arm, Wilson was a tough Texan who was respected by his teammates, he worked hard to earn his playing time, Wade Wilson to me was a pro’s pro, by putting in the work behind the scenes to be ready for his time on the field.  He would often fill in admirably when then starter Tommy Kramer would be injured, and led the Vikings in a memorable comeback win against the Saints after replacing Tommy Kramer. In that game the Vikings would come back and win 33-17 in 1986. We finally saw a glimpse of what Wade could do.

I remember in 1987, Wade started more games finally and Coach Jerry Burns seemed to turn him loose.  Wade helped lead the Vikings to a playoff run that gave us an upset of the San Francisco 49ers (13-2 that year) as well as the New Orleans Saints, and the NFC Championship game against Washington. That game unfortunately ended on the infamous dropped pass from Wilson to Darren Nelson which he couldn’t bring in and Washington would eventually beat Denver to win the Super Bowl.

But Wade wasn’t done, he put together a Pro Bowl Season in 1988 as the Vikings went 11-5 but fell to San Francisco in the playoffs, and while Wade and Minnesota didn’t make it to the big game, I just remember Wade as someone you just felt good about being behind center.  I wish that he had more success here, but I think Wade helped the Vikings keep a steady ship through many quarterback injuries to the starters ahead of him. He was one of the most respected Vikings during his tenure.

After retiring, Wade became a quarterback coach and with Dallas from 2007-2017 was the quarterback’s coach for the Dallas Cowboys, and was a major key in working with Tony Romo.

Vikings fans from my age group are thankful for the leadership of Wade Wilson, truly a steady leader for our Vikings and he almost helped get us to a Super Bowl.

Wade threw for over 17,000 yards with Minnesota with 99 touchdowns and 102 interceptions. Wilson died unexpectedly on February 1st, 2019 which was his 60th birthday.