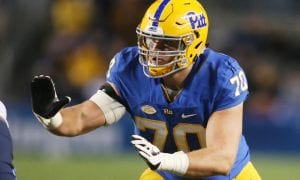 In hindsight, it doesn’t seem all that surprising that the Minnesota Vikings selected Offensive Tackle Brian O’Neill out of Pittsburgh with the 30th pick of the 2nd round in the 2018 NFL Draft. There’s no doubt that the Vikings have question marks remaining over the interior offensive line, and nothing that happened during the draft resolved those issues. However, it was impossible for the organization to ignore the potentially bigger issue at left tackle.

In the 2017 offseason, Riley Reiff was signed to a 5 year contract worth almost $59 million. However, it’s important to note that most of the dead cap from that deal is absorbed into the first two years of the contract, and the team will have a relatively inexpensive out if they decide to move on from Reiff after the 2018 season. Reiff was abysmal in 2017, but this seemed to go unnoticed by most fans because as bad as he was, he wasn’t TJ Clemmings or Matt Kalil (a fair distinction to make too). He put together the worst season of his career, earning a PFF grade of 48.6 as the 59th best tackle in the NFL. He was poor in both pass and run blocking, finishing the regular season as the 33rd highest ranked pass-blocking tackle and earning a run blocking grade of just 48.1. Unless Reiff improves dramatically this season, the Vikings could look elsewhere for the 2019 season.

Enter O’Neill. Let’s start by saying just because he’s athletic and from Pittsburgh doesn’t make him T.J. Clemmings make-2. I think the generally negative reaction to this pick does say something about how fans view the Vikings’ coaching staff. When highly athletic, yet raw defensive players are drafted early in the draft (think Barr, Hunter, Rhodes), we trust our coaching staff to mold them into stars. When we do the same on the offensive side of the ball, fans don’t trust the coaches to do the same, particularly on the offensive line. Now, given the recent history of our coaches developing o-lineman, this is perfectly reasonable. But I’m going to take a leap of faith and trust Zimmer, new offensive coordinator John DeFilippo and offensive line coach Tony Sparano to know what they’re doing.

O’Neill was perhaps the most athletic o-lineman in the draft. At 6′ 7″ and nearly 300 lbs, he is a mountain of a man. His combine was punctuated by a 4.82 40 yard dash, a 29.5 inch vertical, 107 inch broad jump, and a 7.14 second 3 cone drill. O’Neill is not strong enough to be successful in the NFL right away, but then again, how many offensive lineman have had success right out of college in the past five years? He fits the Vikings scheme perfectly, excelling at getting downfield in the screen game and zone blocking.

There is a lot to like about O’Neill. He matched up exceptionally well against 5th overall pick Bradley Chubb which Pittsburgh came up against NC State. Over his last two seasons at LT, he gave up only one sack, three hits, and nine hurries in pass protection. A lot of his critics point to his underwhelming showing during the senior bowl, where he was certainly out muscled in one on one drills. I’d put money on that fact that O’Neill will spend a lot of time over the next few months in the weight room at the shiny new Eagan performance center. If O’Neill gets stronger and refines his technique, not many will be complaining in a few years time when we look back fondly on the time we got our franchise left tackle with the 62nd pick of the 2018 draft.